A brief timeline from Romeo and Juliet to Shakespeare in Love

1564: Shakespeare is baptized on April 26, 1564 (no record of his birth).
Between 1591 and 1595: Shakespeare writes Romeo and Juliet.
1597: Romeo and Juliet is first published in a quarto version.
1730: The earliest known production in North America, an amateur one in New York, takes place on March 23, 1730.
Between 1751 and 1754: the London Company of Comedians, under the direction of Lewis Hallam, produced some of Shakespeare’s plays in the United States, including Romeo and Juliet.

Late 1980s: screenwriter Marc Norman’s son Zachary suggests that his father write a play about Shakespeare in love. Norman writes the first draft of the script, later joined by playwright Tom Stoppard, who shapes it further.
1991: Production of the film Shakespeare in Love begins at Universal Studios in Universal City, CA, and continues in England later.
1998: The film gets released worldwide on December 11, 1998.

Henrik Eger: Could you give a few examples of how your childhood and adolescent experiences led you to the theater world, including your role as a director?

Matt Pfeiffer: I was first drawn to performing by watching Saturday Night Live! I would recreate Dana Carvey’s characters. From there I got into musicals in high school.

My first “job” was doing traveling children’s theatre for the city of Philadelphia. We went all over to city summer camps. That’s when I fell in love with the live event. We played for a tremendously diverse crowd. All they cared about was being entertained. I saw then the way that theatre worked as community.

Later, in college, working on Sam Shepard’s Buried Child, I got interested in directing. I loved the process and thought I might be good on the other side of the footlights. 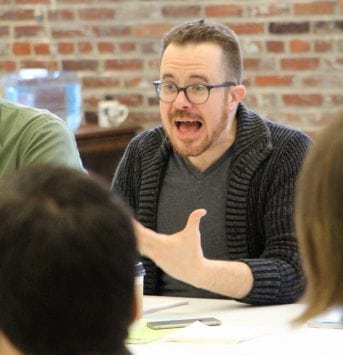 Henrik: When first you read the script of Shakespeare in Love, what surprised you the most about this play’s portrayal of Shakespeare and his contemporaries?

Matt: I was surprised that it made the audience work as much as it did. The script is overstuffed with small inside jokes and anecdotes. Some of them are served up in a way that no one can miss.

At other times, it’s quite beguiling, and you need to be really invested to see all the layers it’s working toward.

Henrik: How did this production at People’s Light come about?

Matt: Zak Berkman [playwright, director, and dramaturg] at People’s Light has been a real champion of my work and has wanted to get me out to the theater for quite some time. We’d gone back and forth on different projects, and when he mentioned Shakespeare in Love, I got pretty excited.

He was unsure if we could produce it, as it calls for a cast of 28 actors. However, I was eager to scale it back and work with a smaller company. So we set forth trying to make that work. And I think our process made the play come alive in unique ways.

Henrik: Tell us about your casting process for this production.

Matt: I cast most of the show without auditions. I’ve done so much work on Shakespeare over the last 10 years that I have built up a fairly large group of actors I can rely on when it comes to exploring Shakespeare’s work.

Henrik: Elizabeth I, the powerful queen of England, and Viola, named after the well-known character in Shakespeare’s Twelfth Night who disguises herself as a man, are both being portrayed by African American actors. Tell us about that casting decision.

Matt: I don’t see the need in 2020 to put on a classical play as a museum piece. The production won’t work if it only looks backwards. While I want an audience to look back at the Elizabethan time and place, I also want the audience to always keep a firm foot in our own time. That means having people on stage who are reflective of life as it is now.

There is great joy in putting Shakespeare’s words in the mouths of people who were not allowed to say them legally in his own time. That tension feels essential to staging his plays and anything regarding Elizabethan history.

Henrik: What were the three greatest challenges for you in this production?

Matt: Traffic. Timing. Humanity. A lot of people are going to a lot of places, so you spend much of your time playing traffic cop. Timing is key for comedy, but also for the pace at which the play needs to move. The script covers a lot of territory, and you want to land with as much impact as possible, so you have to stay mindful of time.

Lastly, as an adaptation of a movie, there are certain emotional beats that were originally scripted for a camera. On stage, you need to do more. So it’s not a knock on the writing, but the actors needed to bring a ton of humanity and life to it for the story to make sense.

Henrik: What did you bring to this complex and highly-creative play as a director?

Matt: My life. It’s a play about making Shakespeare’s plays come to life—that’s the bulk of my professional life. I’ve directed all three plays featured in the script: Two Gentlemen of Verona, Romeo and Juliet, and Twelfth Night. Those experiences allow me quite a bit of insight into how this play works.

Henrik: What did you discover about your own evolution as a director during the intense rehearsal process, including the opening night performance?

Matt: I directed Romeo and Juliet at the Arden Theatre 10 years ago. I’ve directed 10 Shakespeare productions since then. So it was pretty cathartic to revisit the world Shakespeare inhabited as a writer, but also to see how much I’d changed in those 10 years.

Henrik: Which were your three favorite scenes, seen from the perspective of a director, and why?

Matt: I love the balcony scene. It’s a cool, funny riff on the original, with a little Cyrano de Bergerac thrown in. The rehearsal of Romeo and Juliet, where Romeo and Juliet meet for the first time, is where the play really comes alive. The tension of that scene is built around Viola learning how to kiss on stage, and the way it plays out is truly exciting.

The performance of Romeo and Juliet at the end was great to do. I’ve never loved the play more than watching this cast do the little snippets. Ironically, Tony Lawton and Jahzeer Terrell both repeat lines from other productions of Romeo and Juliet that I directed them in.

Henrik: Tell us something about yourself as a theater person that only a few of your colleagues know.

Matt: I think making theatre is collaborative, and so I want everyone involved to have ownership of what we’re doing. It’s not worth it to me if artists feel subjugated to my will.

Henrik: Tell us something about yourself as a mensch that only a few of your best friends know.

Matt: I’m always happy to do the dishes. Just don’t ask me to cook!

Matt: If you love Shakespeare, or the movie, or just want to have a great time, come see our show.

Shakespeare in Love Movie Comes to Life on Stage. NBC 10 interview with Jaime Maseda as Shakespeare and Taysha Marie Canales as Viola.