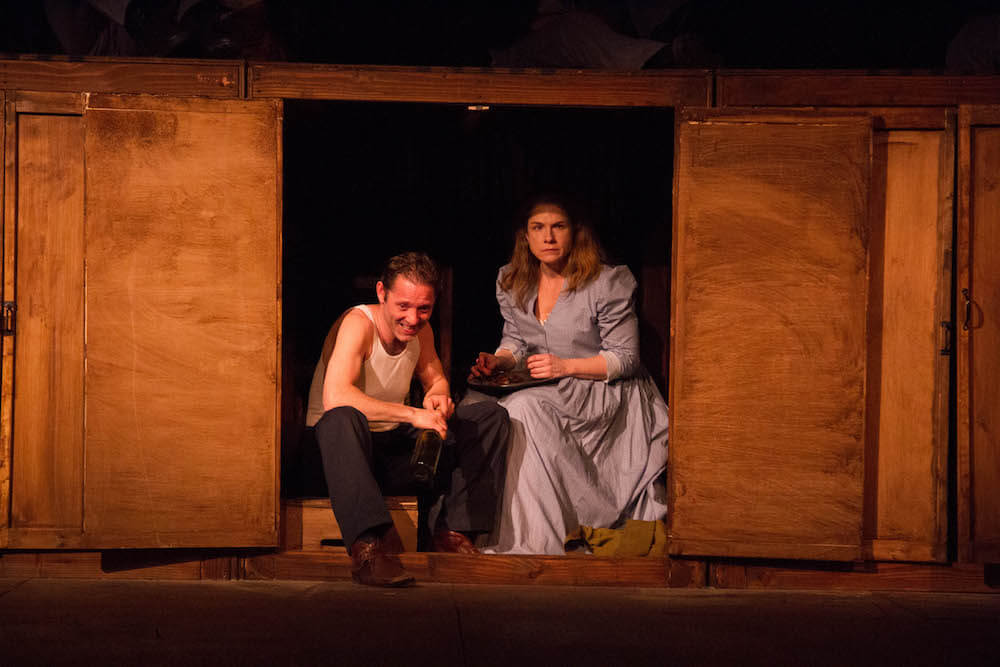 In the 70s and 80s, John Guare wrote his epic trilogy about the American Civil War, American utopianism, and the birth of the American Century. The trilogy started with the last piece, Lydie Breeze, originally considered a stand-alone, which grew its roots back through time as Guare felt the need to expand upon his characters’ histories. Funded by a PEW grant, EgoPo is presenting all three in a single season for the first time, directed by artistic director Lane Savadove; this summer, audiences will have the option to watch all three, one after another, in a single day.

The first installment, LYDIE BREEZE PART 1: COLD HARBOR opened this weekend. The result is fast-paced and skillfully produced, with a large, stylistically diverse cast carrying the energetic play onward; but at its emotional core it is stiff and distant.

The title tells us the cause of all of the actions in the play: one of the American Civil War’s more pointless slaughters, Cold Harbor. The original title of this play, Women and Water, carries a more existential weight: as an officer sends wave after wave of union soldiers out of the trenches to die (eventually 17,000 will die and neither side will gain an inch of land), he cries: “I want you men to achieve paradise! There’s women on the other side! There’s water!” Needless to say, there’s neither women nor water for the men pointlessly spilling their blood for General Grant. The grim is that the play is about searching for something which does not exist.

COLD HARBOR is really an adventure play in which wonder, vulnerability, and camaraderie are in constant tension with cynicism and horror. At its center is Lydie Breeze (Melanie Julian), the daughter of a Nantucket whaler who grows rapidly from a daddy’s girl into an independent, if innocent and still uncertain woman, and finally, by the end of the play, into a Noah-esque figure, charismatically and confidently leading her companions with myth, force of will, and the occasional miracle. 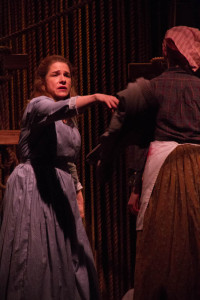 Looked at another way, it’s a Candide-esque sequence of traumas, taking us from the slaughter at Cold Harbor, to a medical boat filled with dying men, to the systematic murder of non-white sailors by their white counterparts; we meet war profiteers, buzzards, matricides, patricides, and murderous nurses. We also, however, meet a worker of the underground railroad (played confidently by Victoria Goins) and the desperately lonely mother of five Confederate soldiers (played with surprising sensitivity by Amanda Jill Robinson). The camaraderie the four leads develop despite the horror speaks to the underlying theme here: there is, providentially, hope amid abjection.

In the face of the sprawling narrative, the strategy of this production, is, for better or for worse, speed. Very few scenes are lingered on. Rather than lean into the potential emotional weight of each horror, director Lane Savadove pushes us onward. It’s a testament to the production’s skillful brushwork that this wide-ranging story is never confusing, addled, or particularly repetitive; this way, we always have mental space for the rapidly changing cast of characters to enter and exit. It’s a light touch choice which puts faith in the writer’s plotting, and the intrinsic power of the themes, to keep us engaged.

But we do lose significance along the emotional journey. In particular, the main characters blur around the edges and perhaps become hollow. Most unfortunately, this is true with Lydie Breeze.

In a 2+ hour play, Lydie does most of the talking. It’s a bear of a role, storming back and forth to her childhood on Nantucket and across the Civil War battlefields, with Lydie taking turns as a character and the narrator both. In this role, Julian ably keeps us moving along, pumping energy into the part and organization into the plot.

But she is almost completely absent of vulnerability, of wonder, of sensitivity. I never believe that she is young (all of the main roles, in something of a reversal for Philly theater, have been cast older than the 20-something characters, probably because, in the later plays, they’ll have to play these same characters in their 30’s, 40’s, and 50’s). Youth is only important here, of course, in that Lydie as a character is deeply vulnerable. All of the characters in the trilogy are lost in one way or another, and the power of the play is their eventual education and disillusionment. The play is emotionally fractured if Lydie is not changed by the series of traumas and victories she undergoes. COLD HARBOR is a bit of a marathon, and though Julian makes it to the finish line, I remain puzzled about why she did it. The more memorable performances here come from the supporting cast: Andrew Carroll’s sprightly, charming, perhaps deranged Cabell and Jahzeer Terrell’s traumatized Moncure come to mind. [Christ Church Neighborhood House, 20 N. American St] January 31-February 11, 2018; egopo.org