They have a name for former LDS in Utah: Jack Mormons. You can leave the Mormon church, but the Mormon upbringing will never leave you. In his solo work CONFESSIONS OF A MORMON BOY, part of this year’s GayFest!, a sixth-generation Mormon Steven Fales explores his excommunication, divorce, prostitution, drug addiction, and inspiring revival. Phindie critic Henrik Eger talked with Fales about his work.

Henrik Eger: Given that you are a musician, singer, composer, writer, and an actor, where do you feel the most at home?
Steven Fales: I have always been hyper creative. I am a creative. Julia Cameron of The Artist’s Way recently featured me in her new book The Creative Life. Solo performance allows me to do it all. Everything I do helps me tell a story. It is all about storytelling: music, sound, lights, images, scripts, dance, etc. I paint, I love photography, I cook. If it’s creative, I will try it.

HE: Could you tell us more about your role as a leader in the solo performance genre and as the founder of the Solo Performance Alliance?
SF:  When you are a solo performer, the cast parties are extremely lonely. So I created a group, with over 700 members now on Facebook—a forum for sharing the ups and downs of the solo artist’s journey. Some of my best friends and colleagues are other solo performers. We need each other. And it is a genre in theater that is getting more and more popular and sophisticated.

HE: I’m impressed by your capacity to make fun of yourself, for example, when naming some of your plays When All Else Fales, or Missionary Position, or Mormon-American Princess, where you deal with the subject of narcissism. When and how did you develop that sense of humor? Is it a reaction to tough realities, a form of survival?
SF: The title Mormon American Princess was inspired by my ex-wife. I’ve been called “narcissistic” by her side of the story so many times that I decided to take the label and wear it proudly—like gays reclaiming the word “queer.” At the end of “MAP,” I find that that I’m not a princess, but a cowboy. A Mormon American Cowboy.

We are all narcissistic on a continuum. So I played with the phenomenon of narcissism and twisted it around. And there is always a religious bent to my titles. This one is also a nod to all the Jewish guys I’ve dated and all the Jewish girls who ever took me to lunch on my birthday! I say this with great affinity, “Mormons are wannabe Jews.”

HE: Hearing that a successful playwright and actor had beaten his addictions could impact many young people who may have given up hope: “When you stop sleeping around and doing crystal meth, you have a lot more capacity to attend to a bigger life. When you’re sober, you can do a lot” (qtd. in Kergan Edwards-Stout).
SF:  I make a choice every day. Do I want to keep pursuing my creative dreams or do I want to just be creative online and in the bedroom? There is a lot of help out there, but what keeps me going in a sober direction are my dreams. Throw your dreams as far in front of you as you can and start pulling yourself toward them. Many things fall into place. I believe too many out there are in jobs and careers that they hate and that offer no creative outlet. Without our creativity we are more vulnerable to our demons. Creatives must create. And we are all creative in one way or another.

HE: Julinda Lewis describes your “life-affirming revelation, as when he dreams that his tears are needed to fill a deep gorge so he and his companions can swim to safety on the other side.” David Clark, like a number of other critics, was also moved by the climax of your play, which seems to have transported theatregoers into a different world altogether. “Without skimping on a single detail, Steven Fales bares his soul and the depths of his despair, creating a profoundly moving experience.” What gave you the courage to present these difficult, often existentially life threatening situations with brutal honesty?
SF: They say that still waters run deep. And behind this smile is a well of great sorrow and pain. It started when my parents divorced at age 16. The arts saved my emotional life. I knew at 18 that I would be a writer someday. So after all the performing, when life really crashed at age 30 with my excommunication, divorce, and loosing custody of my kids, the pen came out. I love to perform and I love comedy, but I have a lyrical side that will always shine through.

I also wrote for my kids. I was afraid if I were to die there would be no one I could trust to tell my story. And so I told it, hoping my kids would find clues that would help them. I am committed to telling the truth because I grew up in a family that chose denial over truth. When I lost everything, all I had was the truth.

HE: Have you considered writing children’s books or young adult novels?
SF:  I love kids. I have two of my own. But I do not specialize in children’s books. I have written a children’s book called The Valentine Maker, currently being illustrated. I don’t intend to write books for young people. I write solo plays, plays, and musicals. I am currently working on a memoir called Oxy Mormon Memoirs that will be a good 500 pages. It is to be released around the time Mormon Boy Trilogy opens off-Broadway in 2016.

HE: Steven, your one-liners are little masterpieces, including your entertaining alliterations. Examples: “Brokeback Mormon” or “Mitt lost, but the Mormon monolith won!” How did your command of language develop?
SF:  Thank you. To survive the hard times I’ve had to learn to look at the humor in things. In graduate school. I read a lot of Shakespeare. Even his villains are funny and charming. 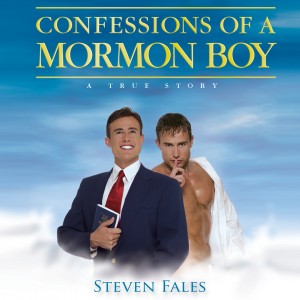 HE: One of your most moving reviews comes from music critic David Clark, describing your songs, he wrote: ““The Bishop’ is a raw, emotional, and extremely powerful track. It touches the hearts of the listeners on several different levels, as Steven Fales exposes us to his 9-year-old self, singing at his cousin Joshua’s funeral, while he recounts his disappointment with the Bishop for not knowing his name. In these heavy and pristinely moving moments, we experience Steven Fales’ search for comfort when he was reaching out to church in his times of great need.” Where are your greatest needs now? What would you need to feel deeply fulfilled as a playwright, a performer, and as a mensch?
SF:  After the Mormon Boy Trilogy opens off-Broadway in 2016 with the book Oxy-Mormon Memoirs and the documentary film Mormon Boy, I will start to let this Mormon Boy phase of my career go. There will be lots of time for more projects and to settle down with a partner. For now, I’m on a mission.

HE: Is there anything else you would like to share?
SF:  Confessions is the story of how I first learned to stop being a victim. I got from one Mormon Boy extreme to a Rent Boy extreme and found a middle ground. The show is about finding moderation. I may no longer be a Latter-day Saint, but something about me will always be Mormon.

Did you know that the Mormon Church is buying up prime downtown Philly real-estate and developing it just like they did recently with their brand new $3 billion dollar complex in downtown Salt Lake? The Mormon Moment is far from over. I’m coming to Philly to help you see through it—and how to live with it.
I can be reached at fales.steven@gmail.com or on https://www.facebook.com/Fales.Steven.

Confessions of a Mormon BoySteven Fales