The program notes are extensive. To summarize : we are at the symphony. We’re in the Annenberg theater, a wide sloping modern proscenium, not far from a symphony hall if a symphony hall was inside of a spaceship. Which it may have to be in the future, because we’re headed for max extinction, rather quickly. This is A PERIOD OF ANIMATE EXISTENCE, Pig Iron Theatre Company’s 2017 Fringe offering.

The orchestra tunes up. From the blackness of the stage, a vector of hazy light slices through the theater. It’s slowly tracing the across the theater, like a lighthouse’s lonely peering. It feels like being up late at night, watching the light move across the bedroom walls, not sure what’s real and what’s an illusion. The low orchestral din mixes with the sounds of human biology: stilted coughs and children’s whispers. Some of us are watching the pathway of the light beam, our heads moving like sunflowers in a field. Others are watching the black void on stage. The crack in the blackness of the stage, and the growing light source. It is continuously shifting its margins and shape, somehow it’s now a square, growing. Like the iris of an eye, dilating slowly. The orchestra is whirring in a beginning-of-time slow build. Act I feels like a simultaneous sinking and revealing, despite the dick swagger of immensity.

Given our collective encasement in the giant pod of a theater, we the audience are both inside the eyeball looking out, and on the outside, using our eyeballs to look into a black hole. You know, like Men in Black. We read: There have been 6 max extinctions on the planet Earth. The last one was called the Great Dying, in which 96% of all species disappeared. Everything on earth currently is a descendant from the 4% that remained.

The object of eclipse on stage begins a slow turning. Trying to describe this to you in words would suck. The important part is that the light source is revealed, there’s a shiny reflective vanishing point, and it’s rotating around. Meanwhile, the line of the horizon is rising, revealed the orchestra behind, dressed for a Missy Elliot music video, with shiny bottom-of-the-sea like tubers coming of the ground, entangling the ankles of the musicians. Supa Dupa Fly. 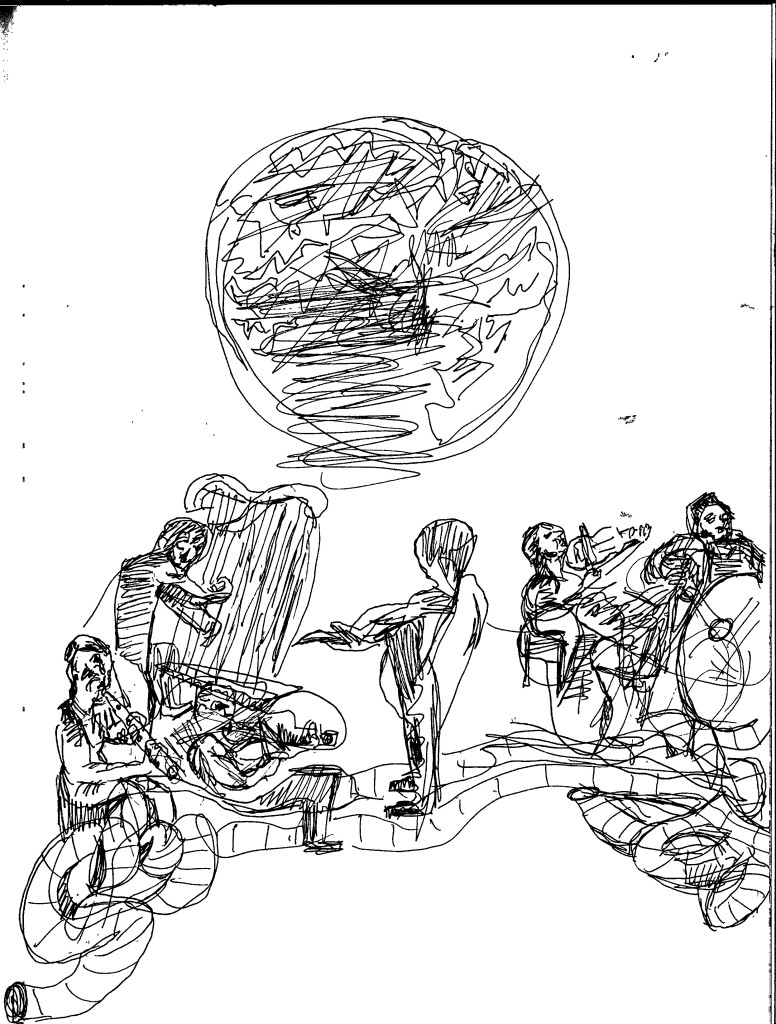 House lights. “Short pause” title card carried across stage, like a live action silent movie. Marilu Donavan arrives with her harp. This will happen between all the acts, and is both grounding because it’s beautiful and cheesy because it’s a harp and heaven and angels and stuff.  A young boy and an elderly woman share an exchange, on lawn chairs, looking out at us, as though we are the starry night sky. “Did you hear that?” a refrain, taking in the bigness and the microness, of us, the stars in the sky the are gazing upon.

The curtains pull back. A wall and a door and the beat drops and a cellist is playing and singing in the center of it all. Daniel de Jesus. Look him up. Causing beautiful resonant trouble. The center of it all. There’s an algorithm of bodies walking through the space, a choral arrangement moving with Cunningham like geography around the cellist at the center. It reminds me of the large scale public works of Stephan Koplowitz. There are ripples of small choreography that pass through this collection of bodies. Watching the wind on a lake surface. It’s a gentle fugue, overlapping and repetitive so that when it shifts, the reward is relative to the established pattern. I am delighted to notice that even though I feel like I’ve seen this moment of choreography many times before, when it’s done well, it still is nourishing. We too are animals, and so, even our most satisfying designs are perverted and beautiful mimicry of Nature. 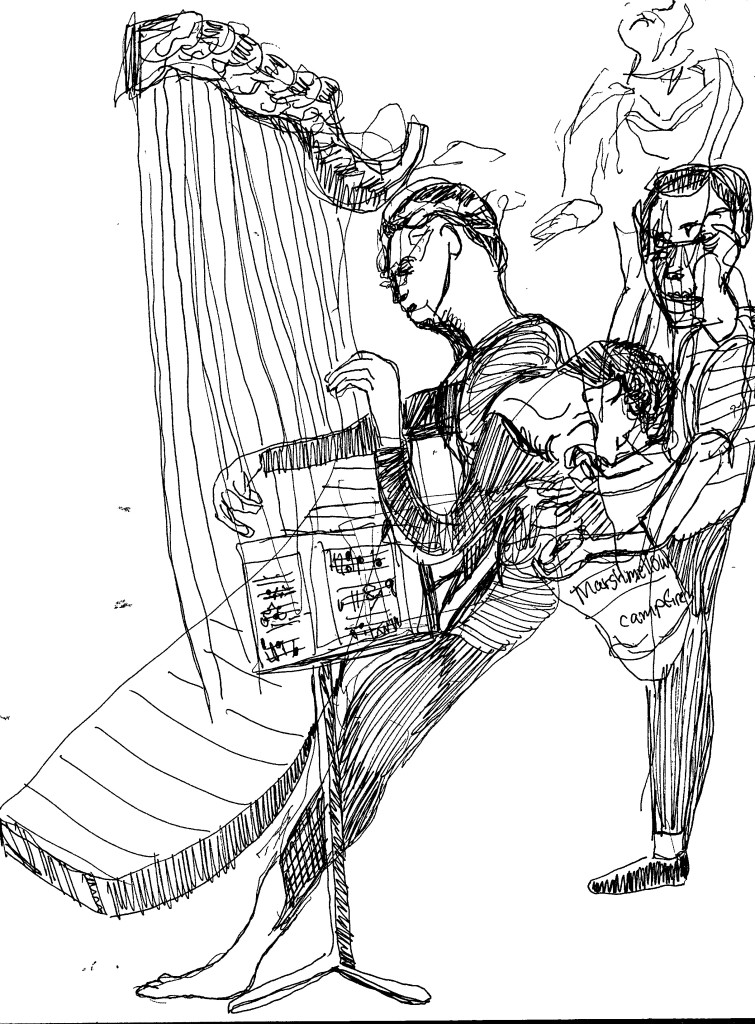 Act III. Sentient Halal Cart. Humans as the reproductive organs of machines; it’s a sort of Matrix twist on Michael Pollan. Brief discussion of immortality and what the Gods know. The fucking timing is so on point. I will never look at Halal Cart quite the same. A reminder that despite Jesus, Allah, and Adonai, there were (and still are) many, many gods, much more like us, with their dances and their fallacies.

Act III. The kids show up. And the elders. The sound, set, and movement design is like if Bill Nye the Science guy recorded his show  in Mr Rogers’ neighborhood. And young philosophers Ilan (Margalit Eisenstein) and Pete (Simon Kiley) are killing it with their metaphysical volleys. Act III is Sufjan Stevens meets Christopher Guest meets Radiolab. Yeah! It’s the longest act of the three, or it feels it. The amount of wrangling that went into the clarity and cleanliness of all these little ones and elder ones is impressive. (This is the amount of wrangling that would be impossible, on say, a touring rock and roll band like, oh, I dunno, Dr. Dog.)

Gosh, the humans who  have the juiciest answers about life’s big questions are the ones we least often listen to: children and elders. Act III feels like making a whole lot of space for those answers, curiosities, bodies, and voices. 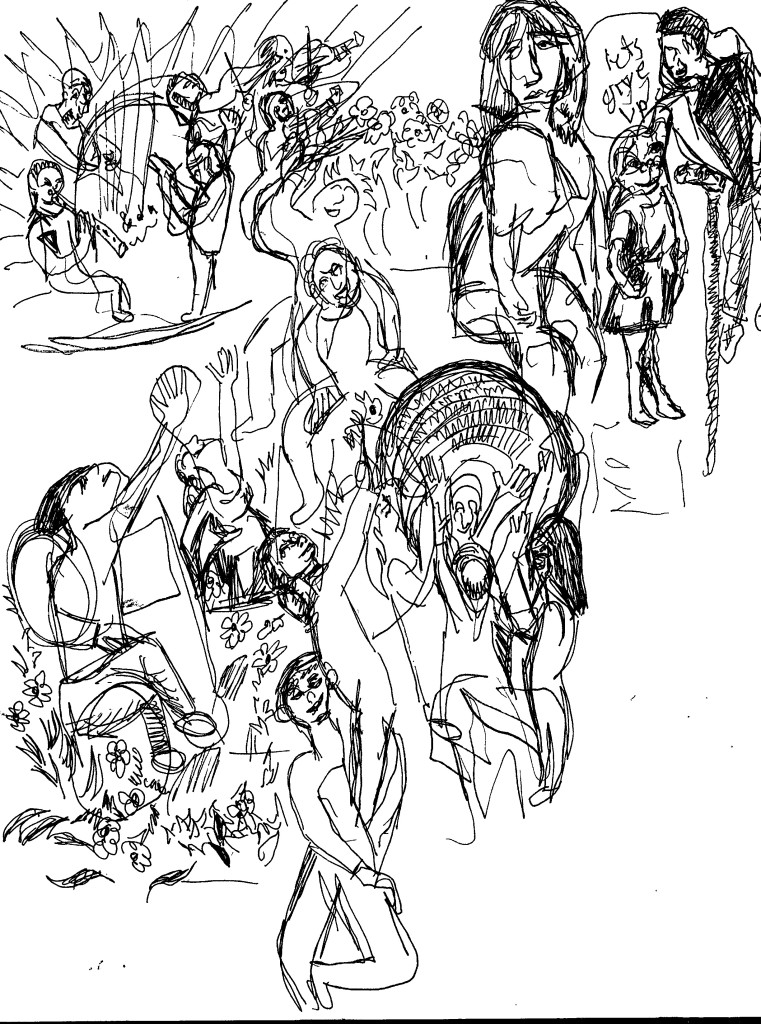 The changeover into Act V is a sort of infinite regress, thanks to the power of professional stage hands. It’s like watching Sim City inside a game of Sim City. White on black illustrations appear as projections on the upper lip of the stage: Trilobites (think Horse Shoe crab). The concentric circles in the trilobite illustrations are echoed in the black wrestling mats with white lines being rolled by the large, clear footed stage hands in black tech gear. Everyone a functioning organism. Young men in skin tone wrestling singlets enter styled with bright red sneakers. Like the most downtown dance concert costumes ever. A chorus emerges in red and gold along the back of the stage: It’s Fashion Week in the Paleozoic Era!

The design in Act V is lots of contrasting line and outline. Maybe: mankind’s attempt at mapping, measuring, molding. Pea-tree dish empiricism. Sports teams competitiveness. False Binaries. Red on Gold. White on Black. Unlike the stage hands, who had something at risk in their stop/start found choreography, the wrestlers, who are not wrestling in any meaningful way, have nothing at risk, and instead are regurgitating start/stop choreography based on the image of wrestling. What could be a chess game played by an invisible hand, or in a dream, is instead under-achieving checkers. The rhythm of their brief spars feels un-natural. Maybe it was aiming to feel “uncanny” in a Twilight Zone so-real-it’s-too-real way? It feels like these muscular, defined bodies didn’t get the same time and attention as the youths and elders. It smells like multiple ideas were proposed here, but none of them were allowed to grow, like someone cut the burner on a crazier idea  before it got to a full boil. The rhythms are sleepy.

The movement does not use wrestlers for being wrestlers, nor use dancers for being dancers, nor use men for being men. The loudest thing here is that they are not fully an ensemble nor are they fully each one alone. An abacus of athletic, powerful, bodies organized into an equation of isolation and uncertainty could be really interesting. But compared to the other deeply resonant acts, this just feels like something didn’t have enough devising time, rehearsal time, or courage. 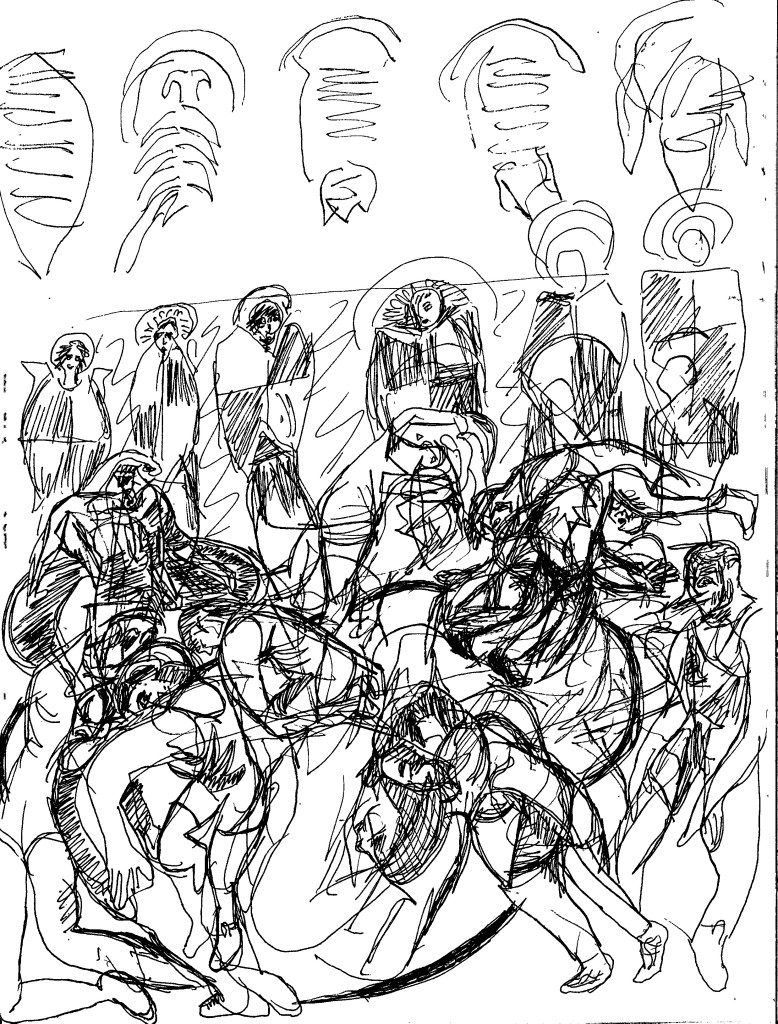 I looked through the program and go online to the extended credits at pigiron.org/PAEcredits. The credits are very long, crediting everyone who participated as a deviser in the many seasonal devising and showing periods. The Ensembles credited include: Contemporaneous, The Crossing, Philomusica Chorale,  Philadelphia Boys Choir & Chorale, and Philadelphia Girls’ Choir. In one of the listed devising sessions, Wrestlers of SUNY are credited for January and May 2017 devising work. Of the wrestlers performing in the show, four participated in an August devising session, I think. Beth Gill is credited as choreographer, though she is not listed as a lead artist, with the director, set designer, and composer. Scott Shepherd is listed as assistant choreographer. Watching Act V, it feels like some assumptions were made about what it would take to create choreography with the wrestlers as impactful as the choreography in the other sections.

Folks have complained about the $400,000 budget, which funded the three year project. I think citing just the overall price tag is reductive, an incendiary way to critique what’s problematic about how arts funding works in Philadelphia, and how that relates to gatekeeping organizations.

Thanks to basic arithmetic, I figure it comes out to about $11,111/month, over three years. Yes, that’s a lot in our world of under-funded arts, but in a better world where artists and craftspeople are paid for their labor, ideas, and travel, that’s a reasonable amount of money for a large scale ensemble production.

And this production, while directed by a cis white male, employs and devises with all kinds of people, genders, ages, races. And Yes, I think Pig Iron could be doing a better job — like all of us white art makers — of allyship and space making. There is no amount that is enough, in our lifetime.

No, I don’t like what the Pig Iron School for Advanced Performance Training (APT) does to the quality of life of my friends who attend, or that APT showings seem to prioritize craft over ethics. Yes, I also have larger questions about the Fringe’s tendency to curate the same local artists in at least the three years that I have been here. Yes, I think “curated” fringe is itself kind of an oxymoron, and that “curated” has come, more often that not, to mean the most produced, meaning the most most well-funded. This is a self perpetuating problematic. As far as I can tell the programming and marketing staff on the ground at Fringe seem aware of this and are open to conversation. Yes, I think the printed program pages for this show could have performed more targeted awareness and dismantling around environmental issues, instead of explaining-as-a-form-of-control program notes.

But, I also like that I’m not being told what to think, or being shamed. AND I think all the direct funding of social justice work needs to be done in tandem with the cultural labor of artists, who work to change culture. It is our job as artists to change people’s minds not by telling them what to think, but by creating environments for them to change their own minds, to see things differently, to process complex information. And I think Pig Iron did that.