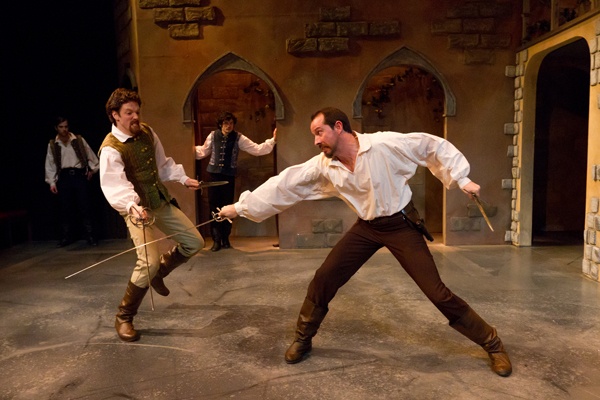 You may ask, “Do we need yet another production of Romeo and Juliet?” The answer is yes we do. This is the Lantern. Next question? The Lantern Theater Company faithfully includes a Shakespeare play in their season lineup. In the last ten years they’ve turned out a string of acclaimed productions which have made the Lantern the prime destination for Shakespeare in this town: A Midsummer Night’s Dream, Henry IV Part I, Hamlet, Othello, The Taming of the Shrew, Richard III, Much Ado, The Comedy of Errors, and The Tempest. Nothing is rote or textbookish or static.

In Romeo and Juliet they work the details as if an HD camera were coming in for close-ups. Director Charles McMahon’s approach keeps it physical and true, while he examines the interplay of the young and the old, accent on the young. Many students in the audience this evening related, and heartily voiced their approval at each hint of winking sexual innuendo.

Jake Blouch’s bold Tybalt swashbuckles and Kevin Meehan’s Benvolio delights. Charlie DelMarcelle’s notable take on complicated Mercutio is witty yet sterner than the usual course. KO DelMarcelle’s appropriately youthful Lady Capulet is a study in subtlety and restrained reaction. Leonard Haas as Capulet is perfectly capable of negotiating the hairpin turn from kindly to unreasonable. The presence of Frank X and Ceal Phelan in the cast is comforting, two mighty actors who are beloved of audiences. Phelan’s Nurse, a bundle of misguided energy, chatters on, aiding and abetting, trying to be helpful. And when the well-meaning Friar Lawrence bungles things, chickens out and fails to stand by Juliet, Frank X shows his pain.

The Lantern’s approach to presentation and their unusually nuanced acting compel the story to life. However, the choice of working with a minimal cast incurs a rash of doubling, which can be both a blessing and a curse. It works with the Mercutio/Prince combo, and adds a frisson as the Prince is handed Mercutio’s bloody shirt. But doubling is not always as felicitous. Casting the distinctive red-haired Blouch as Tybalt and Paris and a servant can momentarily confuse and strain the boundaries of belief. Ceal Phelan as Montague doesn’t sit quite right in an otherwise gender-consistent ensemble. A price is exacted for such a sparing use of actors. R&J is nothing if not a family thing, yet this thrifty approach does not allow even a brief glimpse of Romeo’s mom, Lady Montague. And the bare bones Capulet party, radically thin on festivity, wants more revelers as Romeo is felled by his first sighting of Juliet.

McMahon, an excellent editor, can well intuit what to keep of the text and what to let go. I trust his instinct as he replaces Shakespeare’s first scene (in the text the warring houses servants trade delightful and bawdy puns) with cut-to–the-chase action, full of scuffles and knavery. And the dangerous duels under Alex Cordero’s fight direction are no tame creations. But at one point the show could use another moment of inspired loosened interpretation. Case in point: The balcony scene feels more uncomfortable than romantic as Romeo, standing on the ground, reaches up to the balcony and repeatedly pulls Juliet’s arm downward. I imagine more than one audience member wants him to let go of the over-stretched arm, go ahead and bound up onto the balcony, and kiss the girl.

The production is marked at times by curious choices; for instance, Juliet’s critical potion-taking scene is handled as a throwaway, making-do with her sitting on the side of the stairs for lack of a bed. Scenic designer Meghan Jones, who manufactured space out of nothing at all in the recent Lantern production of Private Lives, surely could have produced a bedroom for Juliet in this lovely little set.

At the end McMahon wisely hews to the contemporary line on the question of what to do with Paris. Although Shakespeare placed him right there in the crypt to form a threesome, directors often want to maintain clean focus on the young lovers and let the emotionally messy Paris entanglement fade away. Yet the famed death scene is oddly sidelined here. One might expect to see, front and center, the stark consequence of the families’ feud — a kind of young dead lovers Pieta. Instead the centerpiece is pushed way over to the side of the stage and onto the floor, where it’s obscured from the view of many, lending a vaguely anticlimactic quality to the close. So there are issues. But they occur in the context of the rarified air of a beautiful and finely tuned performance. The Lantern remains the go-to outfit for fresh Shakespeare.

This production is part of Shakespeare for a New Generation, a National Endowment of the Arts initiative in cooperation with Arts Midwest. The Lantern’s Romeo and Juliet is an excellent choice for attracting bright new audiences to the theater.