Republished from the Philadelphia Artists Collective blog by kind permission.

For a brief time the Philadelphia Artists Collective tossed around catchy, quippy phrases as a way to market the company, toying with the idea of making T-shirts with the slogan “Philadelphia Artists’ Collective: Dead playwrights, living classics.” It was mostly a joke—but one of those half-serious jokes. There was something kitschy and funny about pointing out a certain reality: that on some level, the work PAC is doing—breathing new life into very old plays—relies upon the fact that the playwrights are mostly a bunch of old, dead dudes.

Meet Ian August. Playwright, actor, artist, all-around good guy—and most definitely alive and well. PAC is presenting August’s newest play, THE MOOR’S SON, as a part of the Venture Reading Series on Monday, February 9, 2015. A new play that fits into the mission statement of the PAC? Yup.

PAC’s Katherine Fritz sat down with Ian to chat Shakespeare, history, and what it means to be the guy who says, “I think I’d like to write a sequel to Shakespeare’s Titus Andronicus.” 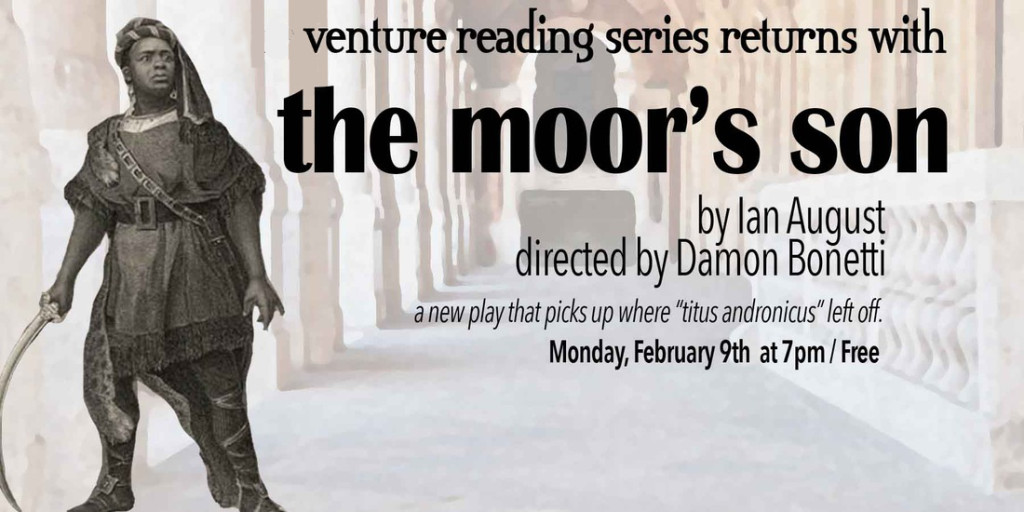 Katherine Fritz: Hi, Ian! First of all, I just want to say that we’re thrilled to have you as the first (living!) playwright collaborator with the PAC! Can you talk a bit about the inspiration behind “MOOR’S SON”? What drew you to this particular material?
Ian August:I’m just as thrilled as you are! I’ve been a huge fan of PAC for years now—my husband and I have seen nearly every PAC show since The Dutchess of Malfi, and I can’t imagine working with another company on THE MOOR’S SON!

THE MOOR’S SON is written as a sequel to Shakespeare’s Titus Andronicus—arguably the Bard’s bloodiest play. I fell in love with Titus after seeing Julie Taymor’s brilliant film adaptation, which starred Anthony Hopkins as the titular Roman general and Jessica Lange as the evil queen, Tamora. Even though it was Shakespeare’s first play, you can see echoes of MacBeth, of Hamlet, of Othello—characters with true moral ambiguity and questionable motives and complex psyches—but the world of Titus Andronicusis a world that is unapologetically violent. For nearly all of the characters in Titus, the solution to every problem is revenge, which perpetuates the violence in all of it’s gory glory. But there is a moment where one of the characters breaks that cycle, and that’s the moment that got my wheels turning.

It happens towards the end of the play: Lucius, Titus’ son, is raising an army to bring down Tamora and the Emperor, when he is approached by Tamora’s servant and lover, the moor Aaron. Aaron, who is often described as one of the most evil characters in the canon, has fathered an illegitimate child with Tamora, and fled Rome to hide his newborn son. He offers to reveal to Lucius all of the terrible things he’s done to the Andronicus family if Lucius will protect the baby. Lucius agrees, and it is this act of kindness by Lucius that breaks the cycle of violence. By the end of the play, when (spoiler alert!) everyone else has died gruesome deaths, Lucius becomes the new Emperor of Rome.

THE MOOR’S SON takes place twenty years later: Lucius is now the Emperor, and in failing health, and that baby—multi-racial, son of the most reviled villain of Rome—is now a young man, raised in the court of Rome, and named after his father. I wanted to explore the experience of that man, and at the same time, revisit the ramifications of the violence of Shakespeare’s play, and work out, for myself, what it was all about. THE MOOR’S SON is a story about legacy and birthright; and also about politics and discrimination and forgiveness and self-acceptance.

Katherine: How long have you been developing this work?
Ian: I had seen the Public Theater’s production of Titus Andronicus in 2011, a stirring, bare-bones production (very similar to the work PAC does!) and spent the car ride home chatting about it with my husband (set designer Matthew Campbell, of PAC’s recent production of Blood Wedding). We kept coming back to the end of the play: whatever happened to that baby? Did Lucius raise the child alongside his son? And what must it have been like to be a mixed-race child growing up in the court of Rome? Especially with the legacy that Shakespeare’s Aaron left behind!

I called Damon the minute we got home, and I pitched him the basics of THE MOOR’S SON. I told him I had an idea for a sequel to Titus Andronicus, and would he, would PAC, be interested in taking a look at it? In order to sweeten the deal, I told him that I would write the play completely in iambic pentameter—even though Shakespeare didn’t write TA in iambic pentameter—I would do it, and it would be good, and would he take a look at it when I finished a draft? Fortunately, he said yes; unfortunately, I now had to write a sequel to a Shakespeare play in iambic pentameter!

I spent most of 2012 working out the basics—the plot, the characters, what was going on in this world, and how THE MOOR’S SON could be a story independent of it’s inspiration. I began writing at the end of 2012, and finished a draft by the following April. Luckily, a friend who is an acting professor at Rider University offered up his students and his talent to help me develop the play further—and I was able to work on a staged reading with some exceptionally talented Rider students in May of 2013. After that, I handed it over to Damon and to PAC.

Katherine: Have you collaborated with Damon before? Talk to us about the relationship between your work, this play’s source material, and the PAC … what is it like to create a new play based upon classical themes?
Ian: I had the pleasure of meeting Damon through the Passage Theatre Company in Trenton, NJ. He and his wife Charlotte had been acting with the company for some time, and I was searching for a director for a reading of my play, Donna Orbits the Moon, at the New Jersey Repertory Company. Damon accepted, and that began one of my favorite collaborative relationships.

What I love about Damon is his insightful ability to analyze text—whether it’s a contemporary or period play, whether comedy or drama or something in between. More than that: his ability to appreciate text. Damon understands that every word I write is included for a purpose, and he is able to find that purpose through his direction.

And what better home to do it in than PAC? Every show I’ve seen with PAC has a company of artists just as eager and excited to dive into language—to tear it apart and find out what’s inside of every line! I mean, I wept at Changes of Heart—I was crushed by The Rape of Lucrece! Did you see Mary Stuart? I’m still shaking!

Writing THE MOOR’S SON was intimidating—it still is! But I learned early on that I couldn’t pretend to be writing Shakespeare—this play had to be it’s own animal. And although the themes of my play are inspired by many found in the Bard’s plays, I think they are just as prevalent in contemporary works: The desire to honor the legacy of one’s parents? Sure, that’s Hamlet, but it’s also Proof. The longing to fit into a world in which one feels he (or she) doesn’t belong? It’s Othello and Henry IV Part One and Six Degrees of Separation and Venus and Les Miserables. The motifs of THE MOOR’S SON are adapted from classic drama, yes, but the themes are still relevant today.

Katherine: Is there anything that you’re hoping the audience will take away after the reading?
Ian: A close friend of mine once told me that a great play can do three things: It can entertain us, it can make us feel something, and it can make us think. A good play, he said, will do two of those things—but a great play will do all three. I hope that our audience will be able to look at this play and find moments to have all three of those experiences. Even though the play is not in it’s final stages (I learn so much in a reading about where my next revision should go), if the audience is able to share those moments with each other, with the actors, with Damon and I, then that’s a successful reading in my book.

Katherine: Anything else you’d like to add (or plug, even!)
Ian: I can’t express how grateful I am to Damon and Dan and everyone at PAC for embracing this play. I’ve never written anything else like it, and I’m so eager to visit the world of the play with this talented group of performers! But if anyone is interested in seeing more of my work—work that is far less Shakespearian, I promise—the Passage Theatre Company will be producing my play The Goldilocks Zone in May of this year. And it will be directed by (you probably guessed it!) Damon Bonetti! If anyone is curious, go to passagetheatre.org to find out more information. We would love to see you there!