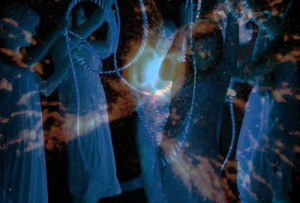 Devised and performed by Found Theater Company, and helmed by co-founder Sean Lally in an impressive directorial debut, THIS IS THE TWILIGHT KINGDOM takes a telling look at our space-age obsession with the exploration of outer space, the collection of data, and the quantifying of information, in contrast with the unlimited love, beauty, and knowledge that lie within us. The non-linear mood piece evokes the essence of Robert Heinlein’s Stranger in a Strange Land (arguably the greatest science-fiction novel ever written), as the talented young ensemble recites scientific gibberish, ponders the great mysteries of the universe, and struggles to understand alien life and language, before the realization that we are all interconnected through being, and that we need to “explore the infinity within” since “no amount of knowledge will ever fill that space inside you.”

Well-placed references to religion, history, literature, quantum physics, music, and astronomy are interwoven into Found’s visionary work, with an affecting use of light and sound. The dreamlike vocal harmonies of the cast (featuring Matt Lorenz and Alison Mae Hoban) recall the mystical chanting of medieval monks and invoke the music of the spheres. If anyone still accepts the commonplace that the scientific mind is superior to the artistic, THIS IS THE TWILIGHT KINGDOM will rectify that misconception; it is an aesthetic revelation that will transport you to a different realm. [Painted Bride Art Center] September 5-22, 2013, fringearts.ticketleap.com/this-is-the-twilight-kingdom.

Read another Phindie review of THIS IS THE TWILIGHT KINGDOM.

One Reply to “[5.2] THIS IS THE TWILIGHT KINGDOM (Found Theater Company): Fringe review”