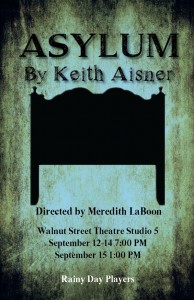 Grown-ups aren’t frightened by monsters under the bed. The real ones to worry about lay there right next to us, whispering away in the dark. If we manage to sleep, they sneak into our dreams. The scariest ones trick us into thinking they’re on our side. ASYLUM is the story of a Gary (Hank Curry), who actually invites his monsters into bed to play with them. What happens when they let him think that he is in control? The show, with a script by Keith Aisner, is thoroughly good. The actors tackle some thorny theological debates with élan, and most play multiple roles, including a hilariously aloof God and a damned charming Satan.

Most of the choices the cast and the director make are spot on, but one major choice is distracting. Gary’s delivery is often stuck in the same key, a casual monotone that veers towards blasé. He sounds the same when flirting with a woman, and when wrestling with inner demons. It’s hard to tell who’s at fault, because Curry shows himself to be a fine actor in other aspects, and director Meredith LaBoon consistently hits the right notes elsewhere in this complicated show. Even if his delivery doesn’t work, at least it is a strong choice, and ASYLUM is filled with those. Two of the best examples are the electric performances of Daniel Barland (as God and as Gary’s friend Davis), and Stephanie Iozzia (perfect as Mother). This is the very first show for Rainy Day Players, and it’s exciting to wonder what they’ve got planned next. [Walnut Street Theatre Studio 5] September 12-15, 2013. fringearts.ticketleap.com/asylum.