In SPLICE, a single flat wave of board whoops its way through the Leonard Pearlstein Gallery, which consists of about four rooms, vaguely defined by false walls. The board, an installation piece by Jeremy Holmes called Convergence, makes use of the entire space, floor-to-ceiling. Its languorous loops, seen whimsically, could be the track of a single dancer’s ribbon frozen in space. The industrial, white galleries explode under the influence of the sculpture, which emphasizes empty space and the unseen tensions of air. Four performers gently explore Convergence. They whisper words to it, run their hands along it. Their dance begins lazily, catlike, and slowly evolves to discover the speed at which the sculpture sweeps around corners and in loops. They murmur isolated words, which reverberate throughout the galleries. Their movements explore the contrast between the curves and swoops of the sculpture and the gallery’s sharp corners and solid planes. 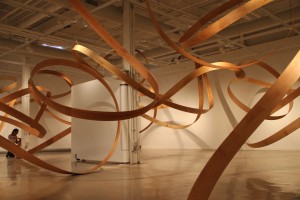 At one point, we are asked to stand and “listen to” the sculpture while dancers tap on it, whisper to it, drum on it. A wild, laser-like warble warps through it. The entire piece is connected and taut, so a tap on one point in its length makes the entire sculpture sing. Time is frozen to give the invisible concrete form: the curve of Convergence, which could be seen to trace a single sound’s motion, now provides a solid track for new sounds to travel. Other things—the words of the performers, light, the padding of feet on concrete, and the dancers themselves—bounce against it, loop around it.

Later in the performance, I close my eyes, focusing on the dancers’ whispers, the brushing noises of their bodies against the concrete floor, their taps on the sculpture, and the padding of their feet. [Leonard Pearlstein Gallery, 3401 Filbert Street] September 18-21, 2014. fringearts.com/splice.