Revised and republished with kind permission from Foley Got Comped. 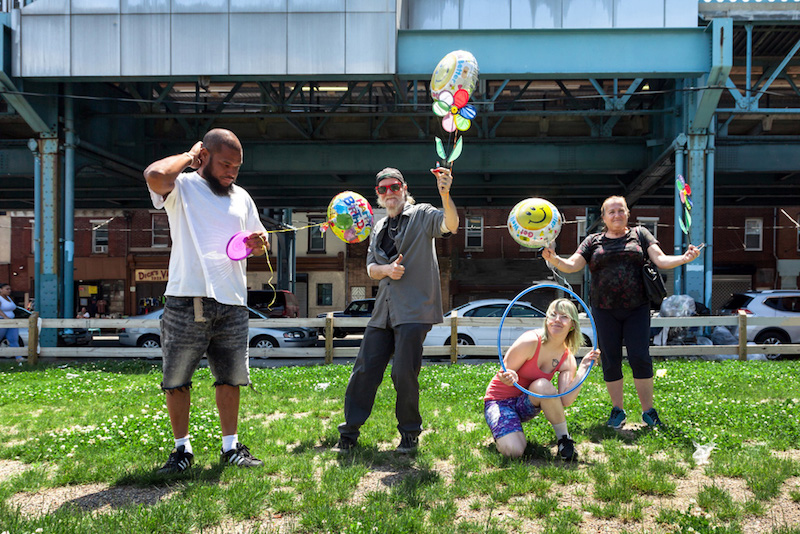 1, 217 unintentional drug overdoses occurred last year in Philadelphia. The highest density of them were in the Port Richmond and Kensington neighborhoods of  North Philadelphia where director Mike Durkin chose to conduct Renegade Company‘s (KENSINGTON) STREETPLAY, billed as a “walking performance in the street” conceived and performed by Kensington-area residents.

Artist Ashley Flynn is fueling up with a slice of pizza when we met her and the other performers in front of the Walgreens at the corner of Kensington and Allegheny. On the ten-block walk down Allegheny Avenue to Campbell Square in Port Richmond, we pass Dunkin Donuts, Bank of America, the Salvation Army, Jasper, Emerald, and Tulip streets.

Flynn pauses in front of a nondescript large brick building, maybe a broken down factory. There’s a single white high-top sneaker, and hypodermic needle on the ground. I know it sounds cliché, but that’s what is at Ashley’s feet as she opens with the tag line that prompts each performance in the streetplay: “When you see me, you see one version of me; I’m so much more.” The poem/monologue she conceives in response springs from the depths of her soul. I cannot recall the exact words she used, but she radiated power and her eyes revealed pain.

I wish Renegade could conduct these walking performances year-round, because sadly, I only caught the stories of three residents. It was not enough.

Note: The walking tour was only one way, and as a woman who often likes to go to shows alone to concentrate, I found it problematic when the sun went down, folks were painting on paper and old furniture, playing guitar, eating home cooked meals etc in Campbell Square which in theory was wonderful, but no one was really thinking of turning back in the direction of the largely vacant, dimly lit streets we just walked through in daylight. It was about an 18 minute walk, littered with needles, dealers, undercover cops, and who knows what else. The folks connected with the production may be at ease in that environment but as a single woman, I did not feel safe. I went into survival mode and just found the roughest looking man in the group, a performer named Eddie, and asked if he would escort me back to the Allegheny El Stop, and he kindly did.

You may think I am being judgmental, but the first time I ever reviewed a matinee, at the Paper Mill Playhouse, on Ormes Street near Kensington and Somerset, I was mistaken for a prostitute by police and almost arrested. (I would have been if the playwright did not run out and save me). Read that review..