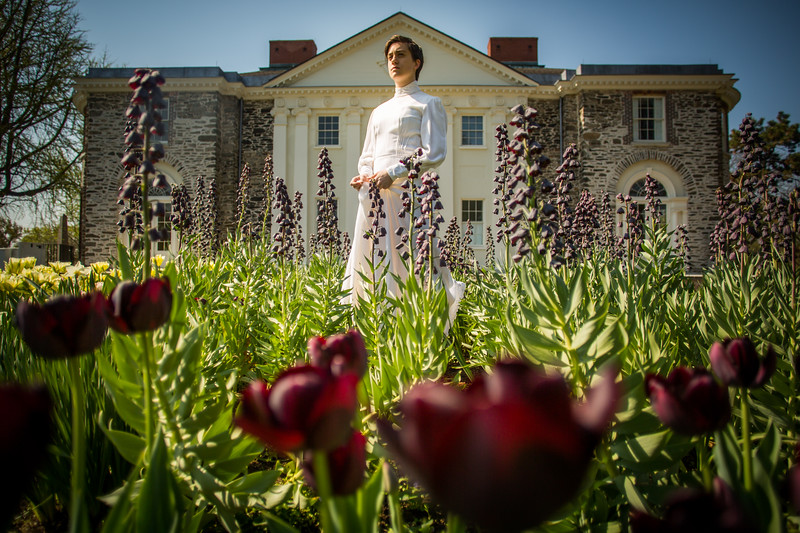 Philadelphia Artists’ Collective generously let me review their new show, MARY ROSE, with the proviso that I acknowledge that what I had seen was a preview. Consider it acknowledged, although I cannot imagine that this enchanting production, directed with great subtlety and imagination by Claire Moyer, needs any polish. However crammed your Fringe calendar may be, don’t miss this one.

Written by J.M. Barrie in 1920, it’s recognizably, thematically, by the author of Peter Pan: time stops in what we might call arrested development. But that kind of lingo jars; this play has more to do with inexplicable mystery and magic and memory than it does with psychological analysis.

The show begins in the beautiful mansion of The Woodlands, all creamy walls and French doors and high ceilings. A woman in black—a dress from another era (how hot everyone must have been in those long ago summers!)—is our guide into the past. This Narrator (Anita Holland) launches a plot that will be half told, half dramatized in the course of the three acts to come. A man (Chase Byrd) appears, in a military uniform; his interest in the house is clearly personal as he is shown around by an unsmiling caretaker (Corinna Burns). This is a haunted house, and who haunts it is the story that will unfold.

Years before, an eleven-year-old girl, Mary Rose (Emily R Johnson) vanished from an island in the Outer Hebrides while on vacation with her parents (John Lopes and Susan Giddings). Twenty days later she was found, unaware that any time had passed. Years later, she returns to the island with her husband (Adam Hammet). A boy (Jahzeer Terrell) provides local lore about this “darling” island. For this portion of the tale, Act Two, we all move outside to sit under a tree in a darkened graveyard.

We are held rapt in suspense.

Part of what creates this delightful uncertainty, both indoors and out, is the gorgeous lighting (production designed by Kate St. John). The faint whispers that seem to fill the air—birds come to the island “to listen,” we’re told— as well as the deep silence, are all part of the show’s sound design (Stefan Orn Arnarson).

But the lion’s share of the credit goes to the superb cast whose common task is show us time having passed: from boyhood to dignified manhood, from middle-aged to old, although the exception—and the point of the story—is Mary Rose, for whom time doesn’t pass. Emily R Johnson is all lovely innocence, affectionate and wide-eyed. When she talks to the bush on the island—grown so big! since she was a little girl—she is, simply, adorable. Both Lopes and Giddings, as her parents, convey their complex relationship to each other, to their daughter, and to time: forgiving themselves for living in the present instead of a grief-stricken past, for having “come out into the sunlight.” As Narrator, Holland remains startlingly present but outside the narrative, keeping her secrets with a slight suggestion of a smile, a smile J.M. Barrie must have smiled when he finished writing MARY ROSE.