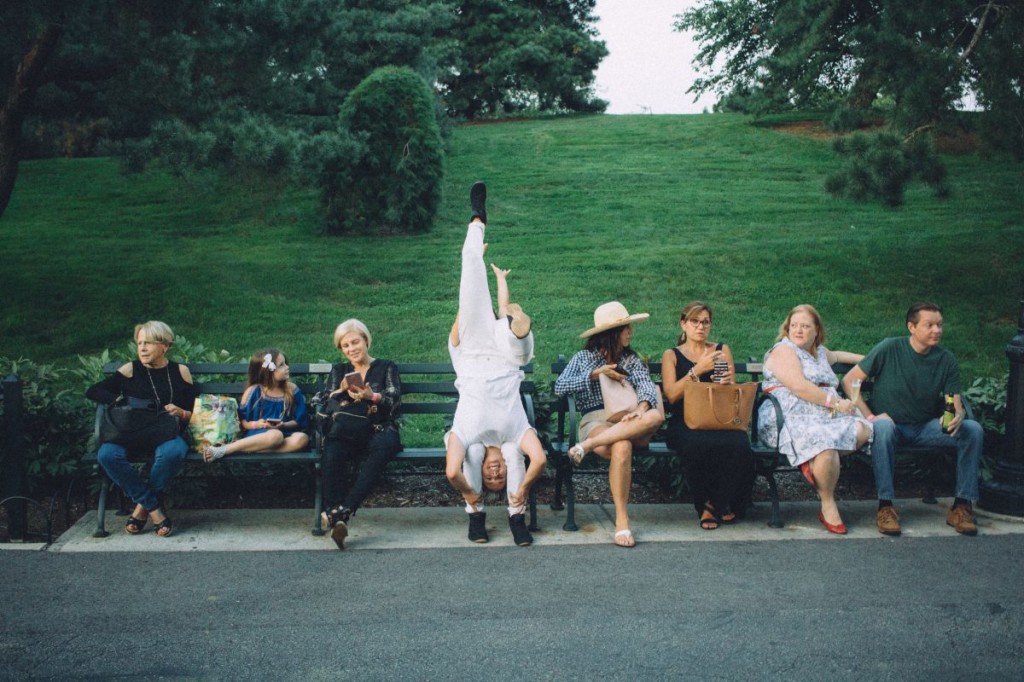 Almanac Dance Circus Theatre was forced to cancel this week’s preview performances due to an injury to performer Lauren Johns. The company has changed plans a lot as it approaches its fifth birthday, scrapping plans for a full-length piece on 18th-century botanist Jeanne Baret, who hid her gender to go an a transatlantic voyage (as Jean Baret). They re-assembled the work into a site-specific outdoor piece Jeanne/Jean/John/Jawn. That show launches tonight at the Garden of the Maas Building in South Kensington.

Company cofounders Nick Gillette and Ben Grinberg spoke to Phindie about the Fringe Festival production and the state of contemporary circus in Philadelphia.

Phindie: You bill JJJJ as a “return to Almanac’s roots”. What does that mean?

Nick Gillette:JJJJ reminds me of our debut show Communitas, in that it doesn’t hide the exertion. I love the particular performative presence of task-based choreography which doesn’t hide from sweat and effort actions and moments to see each other struggle. The acro that challenged us five years ago feels pretty basic to us today, so we’ve had to up our game in order to get us back to that edge of achievement and the grace of possible failure.

Phindie: What were the inspirations?

Nick Gillette: In a strange way, it feels more like an anti-idea. We had a sound, well researched, almost predictable plan for a show about the storied life of Jeanne Beret, and we scrapped it in order to juke our patterns and dare to risk something bizarre and new. We had this great conversational soup about trauma and privilege and the silos of thought on social media platforms, and I started to think of the show as an antidote to the flattening of our relationships into commodity. I’m trying to keep the creative process one step ahead of the part of me that needs a botanist’s ordered taxonomy.

Phindie: There seems to be a flowering of contemporary circus in Philadelphia?

Ben Grinberg: There is, and I feel like I could talk about it for an hour. Even just looking at the Fringe guide, in addition to Almanac, we’ve got some heavyweights like Circa, established artists forging new paths like 3AM Theatre’s Kyle Driggs and Andrea Murillo, circus theater like Tribe of Fools, mission-driven aerial shows from Tangle, and younger artists making shows for the first time like Autopilot/Galactic Garden Party — and probably more I’m not mentioning here. The latter are my students at Circadium, which is the nation’s first certificate granting program in circus arts.

Phindie: Do you have insight into why that is?

Ben Grinberg: I do think that Circadium has made a splash nationally, and is drawing talented young artists from all over the country to our city. I’ve been a huge advocate for Philly’s potential as the American hub for contemporary circus because of its well-established devised theater and multidisciplinary arts scene, both of which are so ripe for collaboration and integration with this newer discipline, and because of the underlying economic and geographical factors which make Philly a great choice to create performance work in in general.

On another level you can track the rapid growth of recreational/fitness circus classes in the last 10-15 years in almost every part of the country, and now that those studios have been established for a while and your average person might be able to visualize an “aerial fabric” when it’s mentioned. You’ve got all of these people with levels of proficiency and/or technical skill in these disciplines, and after a while they realize that performing is at the center of what they’ve been learning. So now they suddenly need to learn how to be artists, and bam, contemporary circus explodes, audiences are hungry for it and people want to make it.

Phindie: Where do you situate Almanac within the performing arts scene in the city?

Ben Grinberg: I continue to think of Almanac as a contemporary circus company, but also a devised theater company (that employs a lot of experiment dance). It’s maybe sort of telling that we teach physical theater at a circus school and acrobatics at a theater school. We love to run between those worlds and create works which combine different modes of making and different modes of watching. I think as Philadelphia’s circus community continues to blossom, the work that we’ve been doing on taking circus from an act-to-act format to create whole works which move from beginning to end will serve us well and continue to inform our identity.

FringeArts: Where do you see Almanac going from here?

Ben Grinberg: I think in the last couple of years have seen us invest a ton of our time in a wide array of things that could create sustainability for us as artists, often at the cost of sweat on our backs and perhaps working on too many things at once. As we prepare to turn five, we’re going to be focusing more on our original and primary goal of creating and touring full-length works. We’re bringing xoxo moongirl, which premiered in June, to Mexico this November and December, and then we will be heading to Edinburgh next August.

Phindie: Nice. What else are you looking to this Fringe?

Ben Grinberg: In terms of presented Fringe, I’m most interested to see The undergird, which is bound to be one of the most deeply researched and moving things in the Festival. But the independent shows are where it’s at this year —to name just a few, I’m really hoping to see feral girl wild child, Metal & Kind’s Indestructible Flowers, Skills and Scars(that one’s happening in my house!) and Bon Iver Fights A Bear(because Emily Schuman is a goddess).

Nick Gillette:The Accountant is my speed. Fred Brown’s solo show (a PRACTICAL DEMONSTRATION…) sounds too intriguing to miss. There’s just so much!

Phindie: Thanks Nick! Thanks Ben!