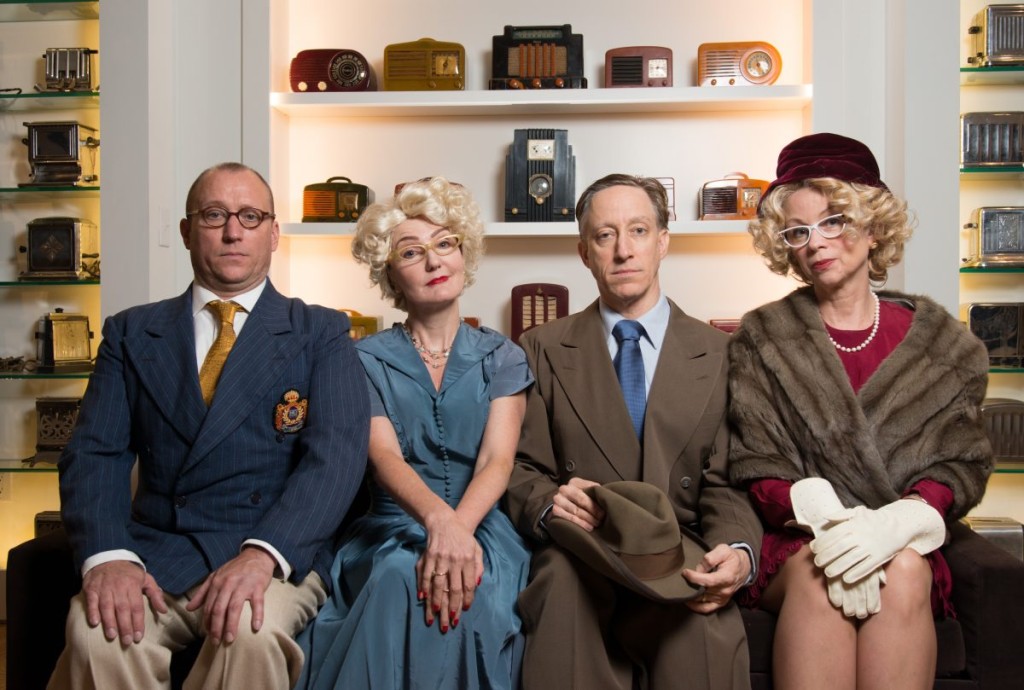 Ionesco described THE BALD SOPRANO, the ur-text of absurdist theater, as an “anti-play.” In many ways, Idiopathic Ridiculopathy Consortium (IRC) has given us an anti-production. I mean that as a compliment. Nestled amidst a jarringly incongruous art collection on the second floor of Bethany Mission Gallery, Tina Brock and company work their hardest to create a sense of radical erasure between performers and audience. The seats are scattered around, and sometimes within, the small playing area that serves as the Smiths’ well-appointed living room (the program lists no set designer, but I’d be remiss not to note that the mid-century details are spot-on). The lighting remains almost distractingly bright throughout the performance. The actors enter and exit through the sitting area — sometimes uncomfortably so. The entire makeshift auditorium is really just one big splash zone, and that often feels so right.

That’s because the purpose of THE BALD SOPRANO — if it indeed has any — is to make plain the artifice and the detachment of middle-class conformity. The two respectable couples at the center of the play speak and speak and speak, but Ionesco forces us to examine whether or not we know what they’re actually saying. This question further extends to the practice of making and attending theater, since the play also functions as a keen satire of the stiff-upper-lip drawing room dramas of the thirties and forties. A good production should have its audience leaving the theater investigating what they expect to find on stage, and why. And make no mistake: what we have here is a really, really good production of a really, really difficult play. Sure, the pacing sometimes drags, and the winky casting of a middle-aged male actor (Tomas Dura) as a young, nubile maid feels too clever by half. But what IRC understands better than perhaps any other company is that Ionesco only works when you lean into the weirdness. An earnest production, however short, would be intolerable. We need to see a group of performers attacking the absurdity like pigs at a trough. That’s precisely what we get here: IRC veterans Brock and Bob Schmidt offer ideally outsized characterizations of the tightly wound Smiths, and guest artists John Zak and Sonja Robson do hilarious work as the befuddled Martins. The quartet sustains a perfectly pitched comedic level right up to the bacchanalian finale. The young actor Arlen Hancock makes a solid impression in the small but important role of the Fire Chief.

IRC’s fine productions of plays both rarely staged and exceedingly difficult to pull off have become a highlight of the Fringe Festival since the company’s inception in 2006. They’ve got another hit on their hands with THE BALD SOPRANO. [Bethany Mission Gallary, 1527 Brandywine Street] September 5-24, 2017; fringearts.com/event/eugene-ionescos-bald-soprano/