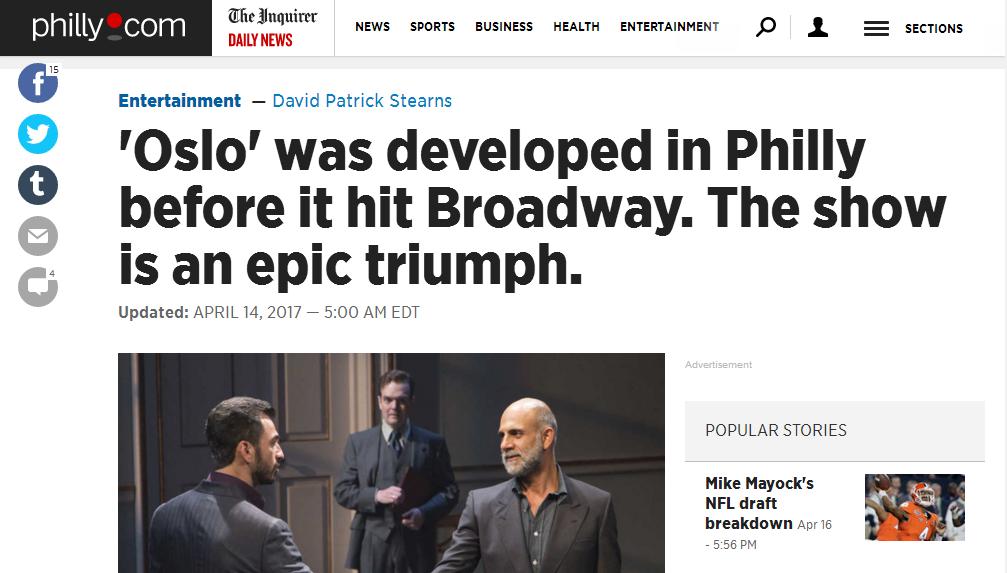 On April 14, Philly.com published an article on J.T. Rogers’s OSLO, which recently opened on Broadway at Lincoln Center’s Vivian Beaumont Theater. OSLO was developed as part of Philadelphia’s PlayPENN workshop, and is arguably that program’s most successful output to date. The Broadway production — which originated last summer in a sold-out run at Lincoln Center’s Off-Broadway outpost, the Mitzi E. Newhouse Theater — stars Tony Award-winners Jefferson Mays and Jennifer Ehle, and is directed by Bartlett Sher, one of the most prestigious and prolific theater artists currently working. By all accounts, Philly.com’s piece should have been a celebration of the great art being generated in our city.

Yet my antenna went up as soon as I saw the article’s byline—it was written by David Patrick Stearns, the Inquirer’s classical music critic. I frequently read Stearns’s music reviews and columns, in which he proves his encyclopedic knowledge of this subject time and again. But what is he doing writing about the Broadway premiere of a locally developed play? The Inquirer has two staff columnists, John Timpane and Tirdad Derakhshani, who regularly cover Philadelphia theater; additionally, freelancers like Toby Zinman (who also writes for Phindie) and Wendy Rosenfield frequently file articles as stringers. Surely any one of them would be a more appropriate fit for this assignment.

Stearns’s piece is not a review, per se, but as a critic, he can’t help appraising the merits of the play, which concerns the brokering of the 1993 peace accords between Israel and the Palestine Liberation Organization. Although he notes “a seasoned dramaturge wouldn’t have been wrong to recommend that the character count be halved and that numerous details about diplomatic protocol be cut,” Stearns writes that OSLO’s “emotional impact is such that you’re not surprised when hardened Arabs are reduced to tears over finally being recognized.” Having seen the play, I must say that I agree with Stearns on both points.

But Stearns and I emphatically part company when he writes that “I’m not sure I would want to see OSLO with anything but New York-caliber actors – or with anything other than Bartlett Sher’s direction.” I had to go back and reread that sentence a couple times. Was a Philadelphia journalist, in the pages of the city’s premier newspaper, in an article supposedly meant to highlight the excellent work being generated in the city, really saying that this play only works with “New York-caliber actors”? But it’s there, in black and white, under the Philly.com masthead.

Stearns’s assumption falls into a reductive – yet prevalent – view of theater as being the province of New York (and, often specifically, Broadway), with everywhere else a distant second. It undermines the entire goal of the regional theater movement, which strives to create thriving artistic communities throughout the United States, fostering creative homes for the actors, writers, directors, and designers who choose to put down roots in places that aren’t The Big Apple. And the tacit assumption that New York actors are intrinsically more talented than regional actors is easily disproven simply by looking at the massive amounts of talent currently occupying space on stages throughout the regional.

I see a lot of theater – my average is 150 shows per year. Many of those shows are in New York, and many are in Philadelphia. In 2016, I also saw professional productions in New Jersey, Delaware, Chicago, Washington, D.C., New Orleans, and Williamstown, Mass., to name just a few places. The caliber of acting I found throughout the United States was consistently jaw-dropping, and I can say without reservation that many of the actors who have chosen to make their careers in places like Philly or D.C. or Chicago are every bit the equal of those who work consistently in New York.

In fact, sometimes they’re better. I would stack Wilma Theater’s searing regional premiere of Branden Jacobs-Jenkins’ AN OCTOROON or Lantern Theater Company’s timely revival of Shaw’s MRS. WARREN’S PROFESSION among the best theatrical productions I’ve ever seen. I preferred Philadelphia Theatre Company’s razor-sharp production of Robert Askins’ HAND TO GOD to the version I saw on Broadway two years ago. In Nick Payne’s CONSTELLATIONS (Wilma Theater), Sarah Gliko and Jered McLenigan were just as kinetic and moving as Ruth Wilson and Jake Gyllenhaal.

It is not uncommon for many people to incorrectly view regional theater work as merely a stepping stone for Broadway or Hollywood. And, of course, there are many actors who do leave the relative safety of a tight-knit regional theater community to make their way on larger stages. Chicago’s legendary Steppenwolf Theatre Company birthed John Malkovich, Gary Sinise, Laurie Metcalf, Jeff Perry, Joan Allen, Tracy Letts, and John Mahoney, who have all gone on to win acclaim and awards on Broadway, television, and the big screen. Yet Steppenwolf has also given us actors and directors like Alan Wilder, Amy Morton, Mariann Mayberry, Yasan Peyankov, Tom Irwin, and Francis Guinan – all of whom have built smashing careers primarily within the confines of Chicago area theater. Are the latter any less talent or any less worthy than the former?

Our own fair city, too, has its own deep bench of talent. I’m sure that anyone who regularly attends Philadelphia theater can easily summon up great memories provided by the likes of Mary Martello, Scott Greer, Greg Wood, Jennifer Childs, Steven Rishard, Grace Gonglewski, Ben Dibble, Carla Belver, Dito van Reigersberg, Kittson O’Neill, and Charlie DelMarcelle – to name just a few. And this doesn’t even begin to scratch the surface of local playwrights like Bruce Graham and Jacqueline Goldfinger, or directors like Blanka Zizka, Matt Pfeiffer, and Terry Nolen. When Stearns remarks that he can only imagine seeing OSLO with New York-caliber actors in a production directed by Bart Sher, I have to wonder how much Philadelphia theater he actually sees.

I, for one, hope to see a full production of OSLO on a Philadelphia stage in the near future, with a cast chock-full of local talent (the aforementioned Greg Wood and Kittson O’Neill would be ideal choices for the roles played by Mays and Ehle) and a terrific local director at the helm. Nothing would be more appropriate for a play that got its start in Philadelphia to come full circle.