“It’s a story about people who desperately need to love and be loved, and yet seem incapable of being honest and present for each other.”

Ladies and gentlemen, the creators of last year’s Fringe hit The Rape of Lucrece are back with another revamped classic! This September, Philadelphia Artists’ Collective (PAC) brings Edouard Bourdet’s The Captive to the historical Physick House in Old City. With this play, PAC tackles issues of sex, domesticity, and class manners. Performed in The 1926 production in New York stirred a lot of controversy—what kind of conversations will it start in 2015? We caught up with The Captive director, and PAC founding member, Dan Hodge to talk about this exciting new project. 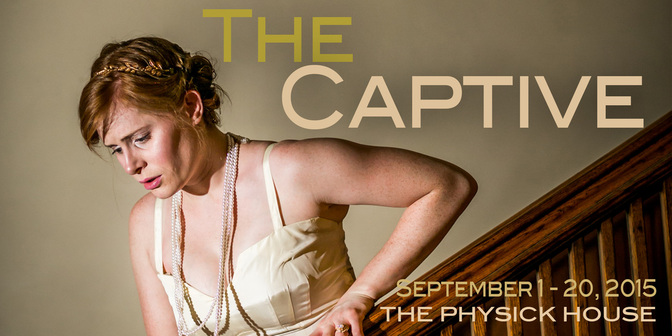 FringeArts: The Captive faced some controversy in its original production in 1926. What kind of story does it tell?

Dan Hodge: It’s a story about people who desperately need to love and be loved, and yet seem incapable of being honest and present for each other. I’m reluctant to give the game away in terms of what made it so scandalous in its early days, but let’s say that it’s a subject that we are still grappling with daily. This much is true – at first glance the captive of the title seems to be Irene. She is the daughter of a domineering diplomat who carries a dark secret that could ruin her life as she knows it. But as the play unfolds, each character emerges as a prisoner to another. It’s pretty thrilling.

FringeArts: What brought you to Physick House?

Dan Hodge: We have a history of performing our Fringe pieces in historic locations in Philadelphia. Because The Captive is essentially a drawing room drama, we knew that we wanted a historic home. The Physick was a perfect fit for this show. It has a sense of class balanced well with an odd severity. Because the rooms are small, the audience will be right on top of the play, heightening the “fly on the wall” experience. The play is full of secrets and heated private moments, so the dangerous intimacy that a location like the Physick affords is ideal. This kind of immersive theatrical experience leaves both the actors and the audience with nowhere to hide.

FringeArts: What attracts you to classic works, plays from another time? Dan Hodge: The perceived distance that a classical play provides allows us to communicate with ourselves in a very interesting way. Often, we are struck by how much the people in these plays seem like us. The clothes and some of the vernacular may be different, but they struggle with the same human needs and fears that we do today. The result is often that we find ourselves seeing something that feels like it ought to be very safe, and yet leaves us unaccountably moved and provoked. Provided it’s done well.

FringeArts: Who are your main collaborators on this project?

Dan Hodge: For this project, I’m working for the first time with designer Robin I. Shane who is creating the clothes for the show. I say clothes rather than costumes because we are keen that these people should look as though they live and belong in this world. It’s only the 1920s, so they should be very recognizable to us. Robin has an incredibly keen sense of how she wants these people to look and how their individual drives push against the social expectations of the time. It’s really exciting to see what she is bringing to the table. Perhaps the major collaborator on this project is Jonathan Burton with the Philadelphia Society for the Preservation of Landmarks. We met him through Mickey Herr and the two of them have been unflinching in helping us secure the fabulous Physick House. Without this collaboration, the production would have had a wholly different identity. It’s truly exciting to consider what this partnership will bring to the show.

FringeArts: Your recent FringeArts productions of The Rape of Lucrece and The Sea Plays received plenty of praise and you were great fun in InterAct’s The Three Christs of Manhattan this spring. The pressure is on! What can returning audiences expect this year?

Dan Hodge: Ha! Flattery will get you everywhere. I think this show will be right in keeping with what made both Lucrece and Sea Plays so striking for audiences. What we do at the PAC is try to provide an immediate and visceral human experience, and The Captive certainly promises that. There is always a certain amount of pressure to build upon previous successes, but the main concern is to get into the room with the wonderful cast and artistic team that we have assembled and engage with the play head on. It is an incredibly unique piece in its own right, and I have to go in with a clear head and a keen idea of what the story is that we want to tell. What continues to make our projects vital is the strength of the material. I feel absolutely certain that this is no exception.

Thanks for the continued excellence, Dan!