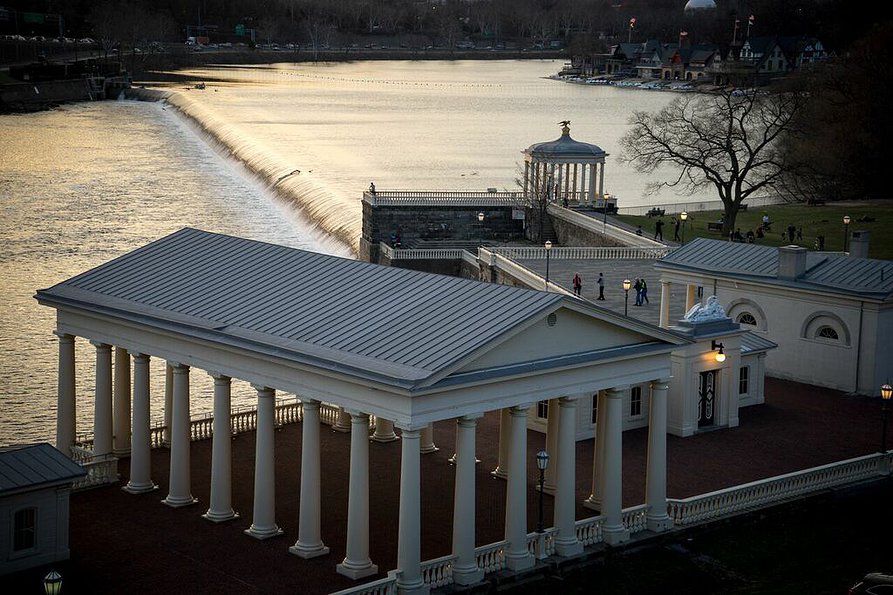 Choreographer Leah Stein and Mendelssohn Club music director Alan Harler have created several dynamic site projects, most notably, Battle Hymns, staged at the Armory in 2009, exemplar of the power of choral music and dance collaboration. Their latest work TURBINE was conceived with Seattle based composer Byron Au Yong with the Mendelssohn Club of Philadelphia collaborating with the Leah Stein Dance Company at the Fairmount Water Works on the Schuylkill River.

The Water Works is the oldest water purifying system in the US and its early innovative engineering was fraught problems but was continually refined to provide a booming city with safe water. The Greek revival structures and its riverscape environs inspired Stein, Harler and Au Yong to create an immersive choral-dance work that explores the specific interplay of machinery and nature.

Torrential rains crashed TURBINE’s June 27 premiere, but to make up for it, there were two performances the following day. Actually, another storm seemed to be gathering for the second show. But, as the performers gathered under trees near the sculler’s boathouse launch, the clouds parted on cue as the Mendelssohn singers began.

Au Yong’s vocal textures seemed to float into the space, fragments of lyrics about the sights and sounds (whispering air, balmy zephyr, slow steps, etc) starts to build into an entrancing soundscape. Meanwhile, on the riverbanks, the dancers, dressed in fire orange monk tunics, pose or dance abstract solos. Seemingly on cue, shafts of light cut through clouds as the dancers scurry up the hills to the gazebo perched just of the Schuylkill River waterfall.

David Konyk and Andrew Marsh lock into an abstract duet on the causeway at one point. Germaine Ingram scuttled to one of the benches and executed a meditative gestural dance. Stein’s choreographic fluidity almost by osmosis making the crowd comfortable to be very close to the dancers as they ‘stream’ through the crowd.

A red tail hawk and offspring circled above, and members of the chorus move in from the Gazebo, those voices carving textured vocal acoustics, against ambient sounds of water, traffic, and distant noise carried on the breeze. Stein devised simple movement geometrics for the singers, having the dancers interspersed as human mooring to keep a more narrative movement line.

The dancers and singers amass in the Grand Plaza, and Au Yong uses more descriptive text from Catherine Gilman’s 1838’s travel poetry describing the Water Works. The chorus amps up the clarity of text (“ through dark channels/ feel the cool/wheels rolled/iron arms/feel the cool/breaking out/ roar) then form the Quadrille Chorus where the dancers break away for scrambled solos. They execute a more regimented rhythmic dance to the choral chant about the destination of clean water to nourish ‘Chestnut, Walnut, Spruce and Pine.’

Next is the Gears passage and the troupe moves to the portico enclosures, directly over the old mill system that used to control the waterfall. The dancers cue the section by holding up cogs and wheels from those machines, and then embody some of the mechanical motion in angular and circular patterns. Stein wisely keeps this brief and is not too choreographically literal.

In contrast, Au Yong is very literal in his choral text and like a good engineer economic with the parts as he weaves quotes in about the Water Works from such disparate and voices as literary giants Dickens, Twain and Emerson, travel writers and navy captains who wrote about the WaterWorks ingenuity and visual harmony. The second portico structure for the ‘Pavillion’ segments trap the vocals much better and you get a more a sense of how powerful the Mendelssohn singers, sonically and otherwise, truly are.

Here, Stein’s movement template is decidedly narrow, but with compelling repeat motifs that reach eloquence, especially in the more symbolic communal and sculptural dances. Highlights included the searing physicality of Jungwoong Kim as he flowed through the crowd, in powerful expressions of strength and vulnerability. Michele Tantoco and Konyk lead in a series of hypnotic duets that resolve in balletic- yoga variations. Stein’s imagery brings to mind the dual immutability of Rodin nudes and Isadora Duncan’s liberated movement.

Stein also uses background perspective and imagery to great effect. At several points, eight ‘Environmental Dancers’ lead a processional up a steep path, with bowls of water, then positioned on the edge of the perilous cliff with the Delphi architecture of Philadelphia Museum looming behind them.

Meanwhile, Au Yong’s lyrics for the ‘Flood’ and ‘Transition’ describing the epic power of the river which he witnessed first hand when he was at the location in 2014 during a storm that swelled the Schuylkill to record levels.

In the Finale, the singers move to the plaza as the dancers cluster on the promontory against the city skyline and executing stationary moves. The chorus fades, as alto Jennifer Beattie’s siren voice from a boat (singing into a megaphone just below the falls) pierces the scene.

As often is the issue with large-scale site works, as conceptually successful as TURBINE, musically and choreographically, it lacked cohesion. Its design worked against some of Stein’s strongest choreography. Similarly, as ambient as Au Yong attempted to make the vocal score, there were unintended points of dissipation and that was a frustrating element for the audience, some distracted enough to start talking amongst themselves. But, on balance, those negatives do not take away from TURBINE’s achievement and artistic impact.

TURBINE was also a celebration, however bittersweet, as Alan Harler’s swan song as musical director for the last 27 years. Harler has championed new ways to present choral music to make them relevant and assessable to audiences, TURBINE was a triumphantly serene crescendo. Seeing him step off the podium and move through the now completely integrated throng of singers, dancers and audience leading the “Justice journeying to harbor” chorale with the audience lustily joining in as a manifesto of art, nature and community.