I was born in a village of no lies… In my life I have searched for truth. To what end?”
—Christopher Chen, CAUGHT.

Christopher Chen’s CAUGHT, now getting a successful world premiere by InterAct Theater Company, explores a range of topics: journalistic integrity (think Mike Daisey and James Frey), the appropriation of non-Western culture in American theater, even the epistemology of truth. Chen presents a wonderfully absurd Russian doll of a play, peeling of layer after layer of intelligent comedy to comment not just on these provoking subjects, but on how we understand and experience theater and art.

Before the play, the audience is invited to enter an art gallery set up on the InterAct stage (scene design by Melpomene Katakalos). Docents hand out a fake program about an exhibit, “Possible Provocations” (photographs of people looking at art), and inform us that the artist will be giving a speech. He appears: Lin Bo (Justin Jain) a dissident Chinese artist, recently the subject of a New Yorker profile. His story of imprisonment and torture, the type which Westerners love to hear about China (how did that Ai Weiwei documentary do?), has made him “a symbol of all Chinese suffering.”

These are serious issues, sure, but Chen is refreshingly cynical about how the flaws of other cultures are seized upon in Western journalism (and theater). In the next scene, novice journalist Joyce (Jessica DalCanton) and her blowhard editor Bob (Ames Adamson, sporting a bow tie and a mustache just dying to be twirled), probe Lin Bo’s story. He’s been caught in a lie. Chen peels back layers, asking us to see the scenes we have just witnessed as theater—as storytelling. How does the fact that Lin Bo twisted the truth for a story affect the underlying truths he revealed: about China, about art, about our preconceptions and stereotypes? 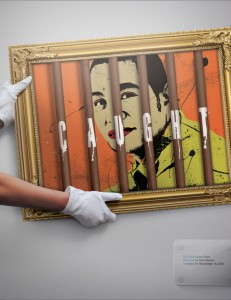 In each scene, Chen creates a new perspective on truth and appropriation of culture, intelligently and hilariously commenting on these subjects as he does so. As another character, Chinese art critic Wang Min (Bi Jean Ngo, who revels in the rationality and intelligence) tells us “each segment presents the audience with a new authority figure”. So, she asks, “What story do we hold on to?”

Director Rick Shiomi blends yet delineates the scenes, moving from realism (extended minutes of a character drinking a beer on a couch) to absurdity (editor Bob’s comically exaggerated anger fit) as the script demands. His actors delight in the humor and opportunities which Chen provides. Jain’s character turns—from dissident Chinese artist to humble actor with stops as an L.A. performance artist and art-minded theater writer—are superbly demarcated and joyfully executed throughout.

CAUGHT would be thoroughly enjoyable as a series of funny vignettes. Each scene entertains on its own merits. Together, they present a complex and penetrating piece of meta theater. CAUGHT marks the first entry into InterAct’s season of all-new plays. What a great start. [Adrienne Theater, 2030 Sansom Street] October 24-November 16, 2014; interacttheatre.org.

One Reply to “CAUGHT (InterAct): The truth is just a lie”