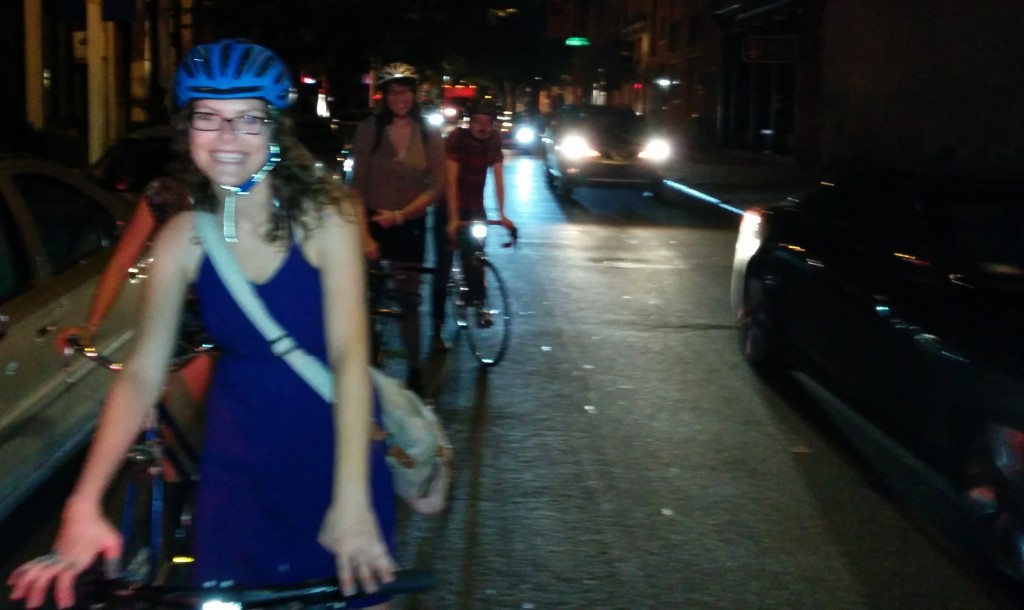 Nine point five hours, five pieces of theater, ten bicyclists, and no great plan on how we’re gonna eat: that was the format for day two of PHINDIE’S OFFICIAL FRINGE BIKE TOUR.

(See my diary from day one here!)

Of course, the eating thing wasn’t really my responsibility. I explained in a waiver to everyone who signed up that they were responsible for feeding themselves. “PHINDIE’S OFFICIAL FRINGE BIKE TOUR,” reads the waiver, “is more of a group, collaborative event than a ticketed tour.”

“Please pack a lunch and make yourself responsible for keeping well-fed,” it continues. “Granola bars and other snacks are also a great idea!”

After all, I thought as I pulled into the long, empty chain of bike racks outside of Drexel’s Leonard Pearlstein Gallery at 1:40 pm on Saturday the 20th, this is a big city! What if someone gets lost? Left behind? Faints or something? I don’t want to be responsible for that!

Ten people signed up to follow me around Philly on the 20th and see some theater. And about half of those people were planning on seeing four or five shows! A great improvement over last week’s tour, when no one was able to see more than two except for me and my girlfriend Leah.

So, the Pearlstein Gallery. A few minutes after we’re supposed to meet the tour outside (which, at this point, is just one person aside from me and Leah) we decide to go in, grab our tickets, look around nervously, begin walking out, and pass a young woman wearing a knee brace who says “Julius?” That’s Brenda, who will see every show on the tour today, and is a dancer herself.

But Splice, by the Leah Stein Dance Company, is about as close to a wild card as anything on the tour. I’ve never seen anything by LSDC, but their reputation precedes them. I picked this show for the concept—dance/installation—and because it fit well into the tour’s schedule.

The installation, Convergence by Jeremy Holmes, is a single long looping whoop of wood that explodes the empty space within the Pearlstein Gallery. Looming under it, we’re entranced. Brenda and I talk about Peter Price, co-artistic director of <fidget> and sound recorder for Splice, whose interest in sound is clearly present in the piece.

The soothing, intellectually stimulating dance starts our tour off on the right foot; you can see my review here.

We bike to South Philly, the three of us, and stop in at a weird sandwich shop with a picture of a pirate cat on its sign before joining the rest of the tour at 18th and Wharton for Chris Davis’ much-lauded Anna K.

It’s here, hanging out on the sidewalk outside the venue (which is a living room in a house, like most of SoPhil’s “venues”) that I realize that almost everyone who has been on either tour, if they don’t know me personally, found out about it via either the Bicycle Coalition or, by proxy, via the Coalition’s Women Bike PHL group.

Anna K walks a teetering line between frivolous and weighty in what is a largely successful attempt to make Tolstoy’s mountainous oeuvre into a palatable comedy. After a slightly confusing start, the play goes on to provide all the plot points in Tolstoy’s novel and somehow not feel rushed, meanwhile translating the dramatic slavs into their less intimidating modern counterparts. There’s an improvisational feel to the whole thing which is difficult not to giggle incessantly at. Davis himself is hilarious as a posturing, douchey Vronsky, and he’s supported by an exciting cast. Jenna Horton, playing both Kitty (as dippy teenage iPhone addict) and her sister “Ol Dolly” (as crude Philly maven), has long conversations with herself simply by hiking her sweater onto and off of her shoulders.

The script could use a bit of polish, relying too much on easy jokes; again and again we’re asked to laugh at the self-aware oversimplification of complex characters and situations. Yes, it’s funny to see Tolstoy’s dire Russians swearing, fussing with iPhones and calling one-another bitches; and we do laugh, but there’s a sense that Davis’ play is better than this. And this sense is proven in the final moments, with a shockingly on-point orchestration of Anna’s tragic fall, nonetheless difficult to buy at the end of a play which sells itself again and again as frivolous.

A short cycle up 18th and west on Walnut takes us to where the First Presbyterian Church looms into sight; yes! we think. Renegade Company’s Hunchback of Notre Dame: a Mute Play begins the moment that monstrous, imposing, edifice appears.

We’re early, and director Mike Durkin is sitting on the steps. “Bike tour!” I say. “Chocolate?” he responds sweetly, proffering a bag of Hershey’s.

I missed last year’s Bathtub Moby Dick, which could be said to have put the Renegade Company, and director Mike Durkin, on the map. It certainly threw them into focus for me; a top pick of Fringe 2013, it was one of the plays I truly wished I’d seen. (I realized later that I’ve seen two of Renegade’s plays before: Hamletmachine in 2012 at the Underground Arts, which wasn’t a music venue yet, simply a range of cavernous, frightening chambers; and a manic, engaging Ubu Roi in 2010’s Fringe).

For the tours, I picked mainly artists I thought would be a sure thing, either because of first-hand experience (Annie Wilson, the Idiopathic Ridiculopathy Consortium, Aaron Cromie and Mary Tuomanen, to name a few) or because of their reputation (like Renegade). That’s something I want to fix next year: it isn’t truly Fringehopping if there isn’t at least one show on the roster that makes you feel nervous, that has the potential to be a total disaster or an unexpected gem. Fringe should be, after all, an opportunity for unknown companies to show their stuff.

That said, Hunchback accomplishes a million things at once; this expressionistic masterpiece confuses at times (it helps to read the synopsis) but never lets down. Victor Hugo’s novel of sexual consequence is given booming, nuanced presence; an original composition by the inventive team of Joo Won Park and Adam Vidiksis grabs your mind by the lapels and forces it up and down the halls of Victor Hugo’s decadent imagination.

Dan Higbee, who plays Quasimodo, starts off as a dippy clown, grinning childishly at the audience until, under a thunderous uproar of noise and light (Eric Baker’s scheme) he is tackled by the rest of the cast and transformed, weighted-down, mutilated to become the Hunchback.

The entire cast is exquisite (a rare thing) but Dan Higbee as Quasimodo stands out. In a play all about sexual aggression and desire (Lee Minora as Esmerelda spends the entire play being stalked and leered at), a remarkably sweet game of catch between Esmerelda and her savior Quasimodo sweetly consummates a joy which exists nowhere else in a nightmarish sex tragedy.

We snag pizza around the corner, afraid we won’t be able to find a seat at La Peg, and arrive at the Race Street Pier, Fringe’s headquarters, right on time to get into White Rabbit Red Rabbit.

WRRR is the play that Nassim Soleimanpour sent out of Iran because he himself could not leave. The play, which is about sixty minutes long, must be performed by a different actor every night; what’s more, actors cannot see the script before the performance. They come in completely ignorant about what is going to happen, as ignorant as the audience

That said, any review of this play is naturally limited by the fact that a reviewer cannot talk about anything that happened in it.

Soleimanpour recognizes this, and from this concept comes his theme. Loose lips sink ships. The play bases its power on the contingency that no one, going in, knows its content. To discuss the play’s content is to be complicit in its death.

Soleimanpour peels back the artifice of theater to reveal power structures at its core. He makes vital statements about the relationship between audience, performer, and playwright, and expands those basic relationships to the whole field of human connection.

I feel bad pointing out that Pete Pryor of People’s Light, who performed it Saturday night, rushed his performance and gaffed some lines, making certain points difficult to follow. I wonder if anyone did any better. What performer would be able to take that on the great unknown without being nervous? Audience reactions range from wild admiration all the way to a man in La Peg who confided: “that was the worst play I’ve ever seen.” Chris Munden’s review here (of a different performance) rests somewhere in between, which is how I feel about it.

Soleimanpour is playing with surprise, genuine surprise and spontaneity for his actor, which is a brand new medium, and produces some magical moments. That said, all we have is the script and ourselves, and contradictorily, the piece suffers a bit from the actor’s inability to “perform” it.

Phew. Deep breath. Have a drink. We’re at la Peg, I’m four plays in, and diving into a steaming pile of truffly mac n’ cheese. Physically I’m not tired at all, but a mental weariness descends. And there’s still one play ahead of me, the one I’ve been most looking forward to: Annie Wilson’s Lovertits. Stupid me to schedule the most challenging piece for the very end of the tour.

We take a break, sit outside around a table, ten of us, goofy and triumphant, chatting about accomplishments: our own and various performers’. I’m proud of the little group, some of whom almost never see theater, who are buckling in four a three, four, or five-play day, taking in some of Philly’s most outlandish theater offerings.

Lovertits is massive. How to talk about it?

Upstairs at the Ruba Club, Annie Wilson’s “burlesque-postmodern-dance-theater-bad-improv performance” (her words) must use a century-old forest backdrop because the venue won’t take it off the stage. Somehow this setting works perfectly. It’s got depth, some hidden entrances in the middle, which allow Ilse Zoerb and her crablike, boob-eyed MC to scuttle in and out while other bits of performance are going on; or Christina Gesualdi, loping as an impossible, nude, warbling ostrich-creature to appear and gaze on the performance from behind.

Merilyn Jackson calls Wilson “one of the bravest, brainiest, zaniest dancemakers in Philly,” and this show reinforces that suggestion. Her trio of dancers is well-chosen: Zoerb, Gesualdi and Jenna Horton (remember her from Anna K?).

Lovertits, as it appeared at fidgetspace earlier this year, was very clearly about different ways to see women’s bodies; the performance of sexiness in everything from burlesque to Little Women was directly and vigorously lampooned. In this latest version, sexiness of the performance is wiped away, leaving only a few forms, as in Gesualdi’s showgirl-like stance as she staggers across the stage giggling and sighing at the start, or Horton’s smirking striptease as Jenna Ben Franklin. And of course there are plenty of naked bodies. But the theme of the play has wandered, lives elsewhere now.

This version goes a step beyond. These performers declare that they can be intelligent, funny, profound and naked all at the same time, without even making their nudity the subject of the conversation.

After the show, Leah and I stand outside in the Ruba Club’s courtyard with some friends who came in from New York for the tour. Zoerb joins us. What do we talk about? I can’t remember, I was honestly too wiped out. The tour hugs, disperses.

That’s it. 9.5 hours, five shows and 2,000 words later, that’s the second (and last) day of the 2014 OFFICIAL FRINGE BIKE TOUR. We’ll definitely, absolutely be back next year.