Perennial Fringe favorite Brian Sanders and his dare-devil dance company JUNK have created a provocative new offering for this year’s Festival. Described as a journey “through a fantastical titillating abyss,” SUSPENDED exposes the psycho-sexual imagery of a conflicted mind that experiences simultaneous states of being and consciousness, caught between dichotomous sensations and emotions. It promises to be “raw, brash, erotic, extreme,” based in “audacious physicality” and “strong adult content.” If that isn’t enticement enough for adoring JUNKies, you can have an even more intimate experience with the uninhibited dancers, in an exclusive VIP locker-room pre-show amid soapsuds, a towel-snap war, and all-male all-nude bathing by candlelight. So be prepared to get wet, and then to be surprised, as the different sides of the ever intriguing Brian Sanders are revealed.

Phindie caught up with Sanders during the third week of thrilling rehearsals, to discuss the concept, content, and context of the electrifying show, and the changes he and his troupe have faced over the past year.
—

PHINDIE: You and JUNK have seen some significant changes since the last FringeArts Festival. Has it been more exciting or challenging to leave your position at the University of the Arts, to see some of the outstanding dancers that you mentored move on to other opportunities, and to focus on going global with the company (from Idaho to Dubai) and expanding your season with additional programming?
BRIAN SANDERS: It’s been extraordinary, and challenging too. Losing two dancers is a bummer, but we’ve got some great new ones, and this particular show–like all of them—is very relevant to me. I was stressed out for three years, really uncomfortable with the changes and restructuring at UArts; I was miserable, so leaving came as a great release to me. But during this same time, in February, a five-year relationship ended, so I felt a sense of openness in my life, as if I were free-falling. Letting go of my position and my relationship I felt terror, but, at the same time, joy. It was a rollercoaster of sensations, like “I’m going to die, but this is so exciting!” I think maybe that’s when we’re the closest to ourselves, to our mortality, to our spirituality; it definitely brought me closer to myself. So I thought about other ways that we, as humans, experience inconsistent emotions—utter elation and utter fear—as if suspended between the two; and I kept ending up in sex. So this show is an amplification of those feelings, of love and loss, pain, and eroticism. This is one big, long, horny review—naked bodies with meat, in water, falling from the sky!

PHINDIE: As a choreographer and dancer, you’re famous for your dangerous physicality, sexually provocative themes and nudity, as well as your humor. What else have you done in SUSPENDED to push the limits even further than before?
BS: There will be speaking vaginas that also sing, and drumming penises, and the use of circumcised foreskins from a bris that will be disturbing in a strange way . . .

PHINDIE: Do you feel that you have to outdo yourself in terms of shock value and ‘wow factor’ with each new show? Is there added pressure from the high expectations of your audiences and reviewers?
BS: I feel pressure, but no one puts it on me, I put it on myself. I want to make sure to grow–whether it’s sideways, or down, or more dark–but not to outdo myself. For example, for last year’s Fringe piece I worked with a composer and nursery rhymes for the first time; I just feel like I need to journey forward.

PHINDIE: When I was discussing with an old friend how much I admire dancers for having such control of their bodies, and fighting through the pain and injuries to attain such beauty, he jokingly said, “Yeah, I’d do anything for a body like that. Except diet. Or exercise.” The discipline of dancers is truly extraordinary, and the results are visually stunning. So how do you draw a distinction in your work between aesthetic appreciation and sexploitation, between thematically integral nakedness and gratuitous nudity, between art and porn?
BS: It’s been challenging with this piece. I told my new dancers from the get-go that this was a hyper-sexual show and they needed to be comfortable with that. But even if I do raunchy, I do raunchy beautiful, so I think maybe it’s the intent. If the intentions of the performers, editors, and designers of pornography lined up and were aesthetic, then porn could be beautiful. I do sometimes think, “Holy cow, where’s the line? How do I turn this into art?” For me, it’s usually by seeing comedy and poignancy. For SUSPENDED, I wanted the choreography to be real, so I asked the dancers to bring in some of their favorite sex moves, which they did. But I needed to have them remove any sense of personality, so they became moving objects, completely unemotional, just a mechanical exercise with a rhythm–otherwise it would have been humans having sex. In another scene I broke the spell of dehumanization and made them real. There’s a bloody rat-tail towel war in which they hurt each other, then stop and help one another, so it’s a very human, tender moment.

PHINDIE: Can nudity ever detract from, rather than enhance, your choreography?
BS: Yes, and I’ve had that experience, early in my career. There really wasn’t a reason for nudity, I just thought it would be pretty, but it didn’t mean anything. You can never predict what people are going to see, though, so I go with what I find beautiful and I hope it will be attractive on some level for everyone. To me that’s the despair of being human, and especially of being an artist, knowing that someone is not going to like me or what I do.

PHINDIE: I’m sure all of your fans will be very happy to see that you’re not only choreographing SUSPENDED, but also performing in it. Which do you find more fulfilling?
BS: I’m excited to be back on stage. For the first time in three years I can move! It’s been a year and a half since my hip replacement, so the ability to move without pain has brought joy back to my life. I can’t do the virtuoso parts, I’m more filler in SUSPENDED, in the dramatic role of a funny twisted madcap wizard. Choreography is very different, and I do find it fulfilling, but you can’t replace being on stage. It’s not that I can’t give it up; I don’t want to. They’re two separate joys.

PHINDIE: This year’s Fringe performance will be in JUNK’s studio/headquarters at the Shiloh Baptist Church, a match made in collaboration with Partners for Sacred Places. What improvements and adjustments have you made to the space, and what does it offer you and your audiences as a setting for SUSPENDED?
BS: Every piece I do tests the space; we want to work as high as is comfortable. We raised money to install a twenty-foot truss, and we’re still not maxed out. We had to rent extra for more height, and then I also had to do some dropping down of the piece, to create a ceremonial cult voguing runway, using the church organs as bookends to the rectangular performance space I designed. I hope the loftiness of the ceiling will make things cool; that’s why my neck hurts, from looking up!

PHINDIE: Some might find the pairing of a sexually explicit and physically perilous show with a church to be a recipe for censorship and restrictions on artistic freedom. Have your landlords had any discussions with you about your content?
BS: No, not in the least, they are tremendous about respecting what we do in our space, as our own sense of a spiritual quest. They’re very open and have no problem with our creativity. 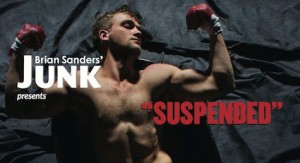 PHINDIE: What’s your first creative memory?
BS: The first moment I remember being inspired to the point that I knew I wanted to do this was seeing Fosse’s Dancin’ on Broadway in 1978. I was already creative when I was younger; I think we’re all born creative and then it’s whittled away. When wasn’t I creative? I was always imagining. But my first stage experiences were terrifying! I was a toy soldier in The Nutcracker when I was ten and everyone was yelling so I couldn’t hear the music, and the curtain got stuck during the final curtain call, so they cut the lights. My family was in the audience and my sister was waving at me, so I waved back, and then I was told not to, it’s unprofessional. So I learned to create my own world–where I can wave on stage!

PHINDIE: At the time, could you have imagined all the success and acclaim you’ve enjoyed throughout your career? What do you consider to be your greatest achievement thus far?
BS: No, absolutely not. I didn’t even want it, I do it because I have to, I feel compulsively driven. I always thought how nice it would be to be normal, to have a desk job. As far as a highpoint in my career, I feel like I’m still getting there, I’m always thinking about what I’m going to do next.

PHINDIE: What are you going to do next?
BS: Two days after the Fringe, at the end of September, we’re going on the road to Indiana. JUNK was slated to do our annual Snowball at the Prince, but it’s closing, so I’m not sure what we’ll do about that. And we’re excited to be performing on the Grand Staircase in the Art Museum, as part of its Art After 5 series.

PHINDIE: Thanks for sharing your candid thoughts, Brian; I’m sure your fans will find your perspective and insights–as well as the show–very stimulating!

3 Replies to “Talking Sex, Substance, and SUSPENDED with Brian Sanders”