Daniel Talbott’s YOU KNOW MY NAME: A DANIEL TALBOTT TRIO presents some unique challenges. Three short plays which could easily take place in the same town dwell with nearly pornographic clarity on the cruelty of the town’s inhabitants and of fate.

Rich Rubin, who has directed Talbott plays in nearly every GayFest!, brings a focus on the underlying beauty and hope of human relationship to this troubling—if at times very funny—text, as well as some spot-on casting. His designers fill in the rest.

Rubin presents the three plays without intermission. When we enter the theater, actor Calvin Atkinson is already on the bare stage, languishing on a chair. The show begins when Ben Deivert, the stage manager, carries on three large sections of wall, one at a time, and a table.

Joseph Napolitano’s set provides just enough of a sense of dread to capture the imagination. The wall pieces—blue-grey, crumbling gothic, suggesting a historic city going to rot—hang from the ceiling. They are rearranged for each of the plays and provide a single aesthetic for all three. Cool, almost viscous light by Eric Baker and an atmospheric sounds by Lucas Fendlay follow the same design cue, creeping on the edges of perception.

No curtain speech: Atkinson, wearing a dress, gets up and dances joyfully and saucily (to Beyonce, I believe) for maybe three minutes, bathed in red light.

Atkinson is interrupted by the entrance of Trev (Mark Cooper) in a Red Sox hat (gold sticker intact), bright red shirt, and pugnacious scowl. Atkinson registers this assault on his freedom with puzzlement and fear. This collision of characters, and threat to joy and safety, is a thread which can be followed through all three plays.

Bear (Atkinson) is new to town, has no friends, and wears dresses and wigs, and Trev, a baseball player, punched him in school. Sitting with Bear in his grandmother’s house every day after school is his punishment.

Bear reaches out to make a connection, Trev threatens him. Trev does his best to torture Bear in this small room without actually hurting him (for fear of damaging his own future). Trev leaves, Bear dances to Beyonce, Trev comes back the next day. After a magical sort of turnabout, the chemistry slowly changes. Mark Cooper brings reality and believability to Trev, his tirades, his hate, and his fear. 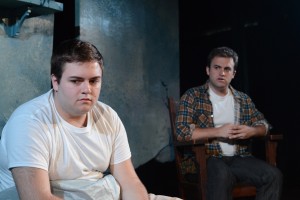 This violence forms the basis for the third play, What Happened When, as well, though it mostly occurs off-stage. A young man (Connor Feimster) catches up with his estranged brother (Mark Sherlock). They talk about their history: the nostalgic bits—going hunting, playing tricks on their father, vacations—but also about all of the horrors which have been visited upon them by perverted old men and by the vicissitudes of fate and icy roads. Sherlock’s character is at once vulgar, loving, sinister and haunted, and he energizes the role with a dynamic recognition of these disparate qualities.

Yet the audience is left to question whether Talbott provides insight into the misery and danger of this town or if he just revels in it. Talbott, who was born in the Bay Area and lives alternately in New York and L.A., seems to fear backwoods America. The problem, particularly with the final piece, is the pornographic nature his fear takes—the two brothers lay out an almost unbelievable litany of horrors with little dramatic consequence. That said, Talbott’s composition features some stunning, inventive moments, too, and a some humor and genuine human understanding are stirred into that sorrow to make a pretty palatable theatrical cocktail unlike any else you’re likely to taste in the Philly this year. [The Skybox at the Adrienne, 2030 Sansom St.] Aug 14-22, 2014. Quinceproductions.com.

One Reply to “YOU KNOW MY NAME: A DANIEL TALBOTT TRIO (Quince): Devils and saints in small-town America”