Plays and Players Theatre is host to several shows in this year’s Philadelphia Fringe Festival and the upstairs bar is a regular after-show spot for Fringe performers, so Daniel Student, artistic director of the resident theater company, has his finger on the festival pulse. Daniel told Phindie what he’s looking forward to this year, at P&P and beyond.
—

1. The Disappearing Quarterback (Plays & Players): When a former Philadelphia Eagles Starting Quarterback submitted a play to Plays & Players for us to read two years ago I thought I was being punked. Turns out Mike Boryla is 100% real, and when we recommended he turn his play into a one man show about his life, the story of his walking away from the game he loved in the prime of his career sprung to life. What neither of us could have predicted, is that the concussion issue that effected him so intimately would simultaneously explode into a national drama in the news. See a sneak peek of the play and read this excellent Inquirer review. Disappearing QB performs in the final two days of Fringe only so get your tickets in advance to force yourself to go after fringe fatigue sets in! playsandplayers.org.

2. Stand Back I’m Gonna Uke: An Evening of Old-Timey Music (Seth Reichgott): When Quig’s Pub was named “Best After Hours Spot” in Philadelphia Magazine in 2011, we knew we had something potentially special going on. Indeed, the bar that neighbors our Skinner Studio black box theater on our third floor has quickly become a favorite spot of the Philadelphia theater community as a place to retreat after shows and rehearsals, open every night of the week to Plays & Players members. And, for the second consecutive year, it will host a fringe show with a member performing, this time one-man-show MACHINE Seth Reichgott. And his ukelele! So come check Seth out, try out Quig’s, and maybe you will decide after to join our membership for the 2014-15 season.

3. Living in Exile: A retelling of the Iliad (Philadelphia Experimental Theatre Ensemble): I have to admit, I actually don’t know anything about these guys. But they are renting that aforementioned Skinner Studio and it sounds intense and epic. 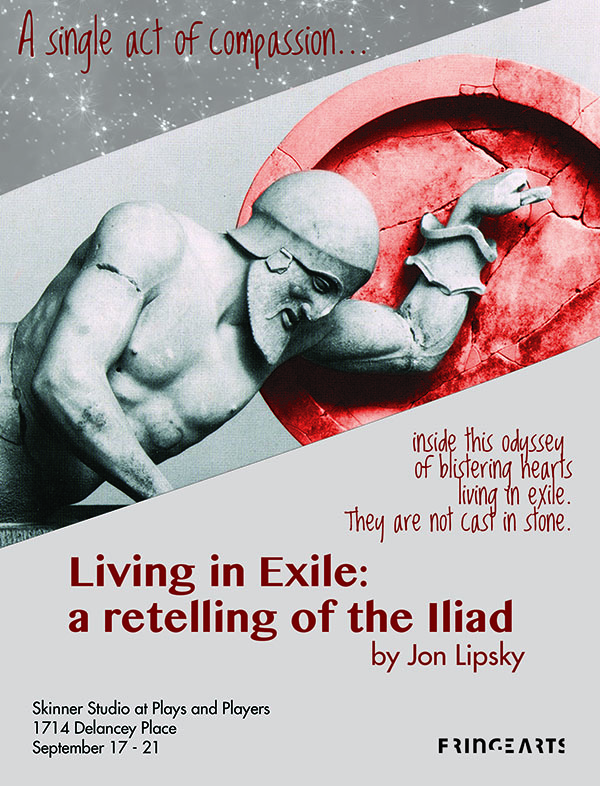 If I am gonna suggest things outside of Plays & Players, I want to focus your attention on our other so called “Off Broad” group of theaters in Center City!

1. Eugene Ionesco’s Rhinoceros (The Idiopathic Ridiculopathy Consortium): Everything Tina Brock’s tiny company touches they turn into comic gold. And I would give my left pinky toe to get the string of sell-outs they achieve through their extended fringe runs. So get tickets in advance!

2. Kill Shakespeare: Live Graphic Novel (Revolution Shakespeare & Hear Again Radio Project): Plays & Players went back to back in Best In Philly when it won the honor from Philadelphia Magazine in 2010 for its comedy show in which it did tongue-in-cheek staged readings of comic books, called Superheroes Who Are Super! At the time, we also presented this fantastic group called Hear Again Radio Project, which brought to life old time radio shows with live foley effects. Needless to say finding out they are doing a live radio show of an amazing comic book where Shakespeare’s characters come to life to try to kill him in this year’s fringe… well… I’ll be there.