It’s hard to pinpoint exactly why My Policeman doesn’t resonate as deeply as it should. Director Michael Grandage and writer Ron Nyswaner’s adaptation of Bethan Roberts’ 2012 novel, a fictionalized account of author E.M. Forster and his relations with a married policeman, is pretty and finely acted, but something about it just feels dull and safe. This is an inherently heartbreaking story about a 1950s-set British love triangle—where all three parties lose—and what should be more daring and devastating is polite and inevitable instead.

As the film opens in the 1990s, Marion (Gina McKee) is ready to take care of her close friend Patrick (Rupert Everett), who has had a stroke, while Marion’s husband Tom (Linus Roache) barely acknowledges Patrick. Of course, once Marion digs into Patrick’s diaries that date back to 1957—the real period-piece section—the viewer learns why Tom has distanced himself from Patrick. Back when Tom (played by Harry Styles) was a policeman in seaside Brighton, East Sussex, England, he met Patrick (David Dawson), a reserved museum curator. The two men fell in love but had to keep their relationship clandestine, even from Marion (Emma Corrin), who eventually married Tom in spite of her suspicions. 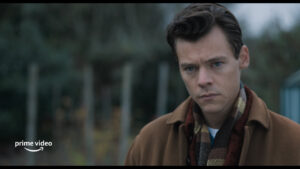 Say what you will about Harry Styles, based on his performance in “Don’t Worry Darling,” but the dreamy musician-dabbling-in-acting was convincing in the ‘50s time period and sold his bigger, more emotional moments. He has the potential to be a matinee idol for his generation, and he’s not the blank slate his naysayers claim him to be. Here, as Tom, Styles is fine again, with his innate charisma shining through, while David Dawson is more of the dullard as young Patrick. While Gina McKee, Linus Roache, and Rupert Everett are all pros, the most consistent performances out of all six are given by McKee and younger counterpart Emma Corrin.

The back-and-forth framework with Marion reading through the diaries should lead to some juicy tension, not go through the plodding motions. When young Marion does see Tom and Patrick in a warm embrace with her own eyes, her confusion is palpable. Even the context of the time period when expressing one’s sexuality outside of the norm could land a man in prison allows for a fraught paranoia. Moments like these are few and far between, but when they do exist, “My Policeman” feels more alive. The passion between our main lovers is also definitely there. Behind closed doors in the bedroom, Tom and Patrick are sexy together. Unfortunately, everywhere else, they’re not that compelling. If anything, Styles is the least of this wistful but wan affair’s inadequacies.