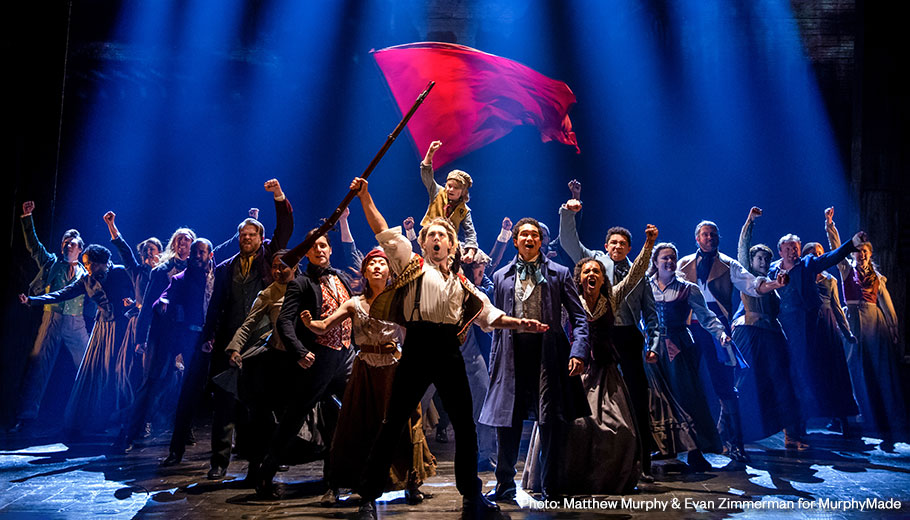 Q: How do you say schmaltz in French?
A:  Les Miserables.

This long musical melodrama, based on Victor Hugo’s long novelistic melodrama is currently wowing the fanbase who shriek and roar their approval at the Academy of Music.

The show is sung-through, so if you don’t already know the lyrics—as the shriekers obviously did— save time to read the complicated plot summary in the program before the show starts. Briefly, it is the story of Jean Valjean (Nick Cartell) who, having stolen a loaf of bread is then sentenced to 19 years of penal servitude. Once he is freed, he is hunted for years by Javert (Preston Truman Boyd), a ruthless self-righteous policeman.

Well, one thing leads to another, as it must; Valjean rescues a child from a criminal couple (Christina Rose Hall and Matt Crowle) whom he raises as his daughter, Cosette (Addie Morales).  She is the center of the romantic sub-plot: Eponine (Christine Heesun Hwang whose solo “On My Own” is beautifully sung) loves Marius (Gregory Lee Rodriguez), but Marius loves Cosette.

A group of radicalized students band together to overthrow the government; they erect a barricade and sing songs (“Do You Hear the People Sing” remains thrilling) as they wave flags and hand out rifles. This was an unexpectedly terrifying moment (for me, perhaps not for the shriekers) since it seemed so obviously to evoke January 6.

There is a lot of sentimentalizing dead soldiers, there is a lot of comic relief that is relentlessly vulgar—how many dick jokes are funny?—and a literally spectacular scene of Javert’s suicide.

The singing is uneven, and a major problem is that the bad guy, has a wonderful voice, far superior to the hero’s. Many of the cast sing as though their mic volume keeps changing: loud and vibrant one minute, and soft and whispery the next.  The score itself (music by Claude Michel Schonberg and lyrics by Herbert Kretzmer) has its big gorgeous peaks and its dull valleys; it’s likely you’ll leave humming (if not belting).

Like Phantom of the Opera and Rent among other big schmaltzy musicals, Les Miz endures.