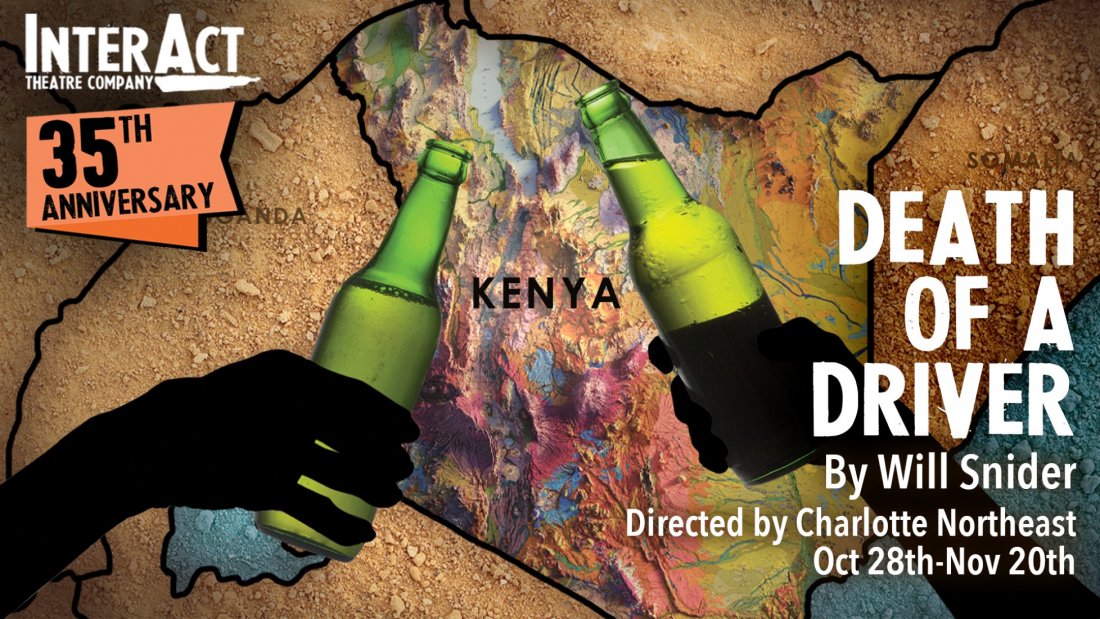 “We are together.”  This line is an often-repeated refrain in Death of a Driver, a grim new play by Will Snider presented by InterAct at the Drake’s Proscenium theater. What that line means is the central issue—if ‘central’ doesn’t overstate the case in this unfocused play; Is it a plea for friendship or a manipulative ploy? Doing deals in Africa—personal, political or financial—even with the best of intentions, is inevitably an exercise in ambiguity.

The driver, Kennedy (Akeem Davis), who may or may not be dead, is the taxi-man hired by Sarah (Hannah Gold) when she arrives as a twenty-something engineer eager to start a business building roads. She believes a highway system will improve life, will “change everything.” It turns out—no surprise—that everything doesn’t change so fast.

The taxi kills a goat, Kennedy deals with the villagers with both tribal understanding and money. The dead goat seems to be presented as a symbol—but of what?  Tribal politics govern life in East Kenya, and corrupt governments and brutal police are merely mentioned. There are tossed-out remarks about stolen elections and political riots and murderous police which seem to suggest Relevance, capital R, to the current situation in the U.S. They certainly don’t add to our understanding of the situation in Kenya.

Years pass, roads are built, potholes appear: Kennedy becomes a political prisoner, Sarah becomes a cold, award-winning, self-righteous success. Their dialogue lacks both interesting language and depth, mainly because the only times the characters speak to each other is when they are drunk. This becomes tediously repetitious and doesn’t advance our understanding of their relationship or their personalities.

Davis brings passion, intensity and authentic-seeming vocal mannerisms to the role. His character is so excessive that it’s hard to tell if this is intended as realism or caricature. Gold’s character is both underwritten and underacted. Creating a naive, chilly and judgmental woman creates the dramatic expectation that something hidden will be revealed. But no. Chilly and judgmental  she remains, although naive seems to be replaced by bitter.

Charlotte Northeast directs, trying to find some action or excitement or tension in this flaccid play.