Catholic Guilt might sound like a title for a heavy, depressing show, but Kelly McCaughan leads audiences on an adventure that is much more than that. The show is McCaughan’s “playful and poignant” take on her experiences with Catholicism, a mix of stand-up, improv and what they describe as “sinful audience participation”.

The temptatious one-woman comedy was first developed and performed in Philadelphia in 2016, after which it was  featured at the Wilma Theater and had two sold-out runs during Philly Theatre Week 2018 and 2020. McCaughan plans to take it to NYC and beyond, and now, Catholic Guilt returns to Philadelphia as part of the fifth annual Philadelphia Theatre Week. 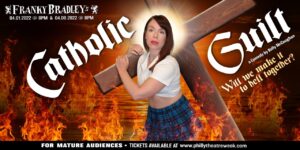 McCaughan wants audiences to “laugh through the pain” while they tear apart “the hypocrisy, misogyny and contradictions of the Catholic Church”. Expect a show for mature audiences and jokes that would horrify your priest.

Catholic Guilt is playing at Franky Bradley’s on April 1st and 8th at 8pm. Tickets are $15 and can be purchased at phillytheatreweek.com. Proof of vaccinations and masks are required.