Shawn W. Smith returns to WAITRESS in the lead role of Earl. Smith joined the national touring cast of WAITRESS in 2019 after playing an ensemble role in the show. The musical is based on the 2007 film of the same name and features music by Sara Bareilles. Smith talks to Phindie about being back in the pie shop.

WAITRESS is part of the Kimmel Cultural Campus’ Broadway Series and is showing at the Academy of Music on Tuesday, March 29 – Sunday, April 3. 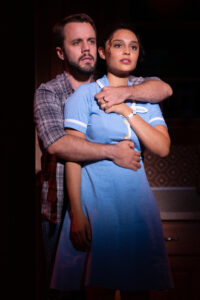 Debra Danese: What do you love most about playing Earl?

Shawn W. Smith: Haha! While I don’t know if “love” is the operative word for this answer, I think as an actor there’s a certain challenge to playing a character like Earl. It is very easy to fall into the trap of playing him as a hammy villain or just leaning into the anger at all moments. To find the humanity and genuine softness underneath the broken man that the audience sees is usually where I find my satisfaction in playing the role. If you don’t find those moments, it doesn’t serve the story nor inform the audience as to how Jenna and Earl wound up together in the first place. Otherwise, I love getting to ride the couch every night during Money Hiding. You might not know the reference yet but, when you see the show, you’ll get to witness my mini-amusement park ride.

DD: What’s the first thing you do when you arrive at the theater?

SS: Connect to the wifi. But then we have a fight/lift call to make sure we’re always focused and well-rehearsed for moments that could potentially injure cast members.

DD: What’s a moment in the show that you love but audiences may not notice?

SS: There is a moment in Act 2 where Jake Mills, the actor who plays Cal, and I share a silent beat with each other that no one in the audience will ever notice – but for us, it serves to more deeply establish our characters. 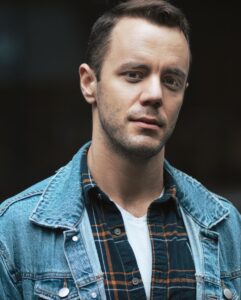 DD: You are also a singer/songwriter for a band. Tell us about that?

SS: Yes! Me and my best friend/music partner, Michael Herlihy- who happens to now be our guitarist for Waitress- created our band called “Stray and the Soundtrack” at the beginning of the pandemic. We released an album of music together under my name in 2019 called “That’s What You Get for Doing the Wrong Thing” full of original songs, but then decided that from here on out we should be known as a duo. During the tour in 2019-2020 I spent most of my downtime writing songs, and when we were shut down due to Covid we decided it was time to finally record and release a new album. The entire album was recorded remotely. You can hear it on Spotify or iTunes under the band’s name. And then since the tour began again in September we’ve been releasing a series of cover songs.  Half of which are covers of some of our favorite radio hits from the last 40 years, and the other half we are referring to as #DisneyDeepDives where we do our renditions of Disney songs that maybe aren’t as well known.  Hopefully y’all give it a listen and jam out with us. We love our fun side project and hope to keep making music on our terms.

DD: I have to ask. What’s your favorite kind of pie?

SS: I love all kinds of pie. Truly. It’s my favorite dessert. But pumpkin pie and strawberry rhubarb are my two all-time favorites.