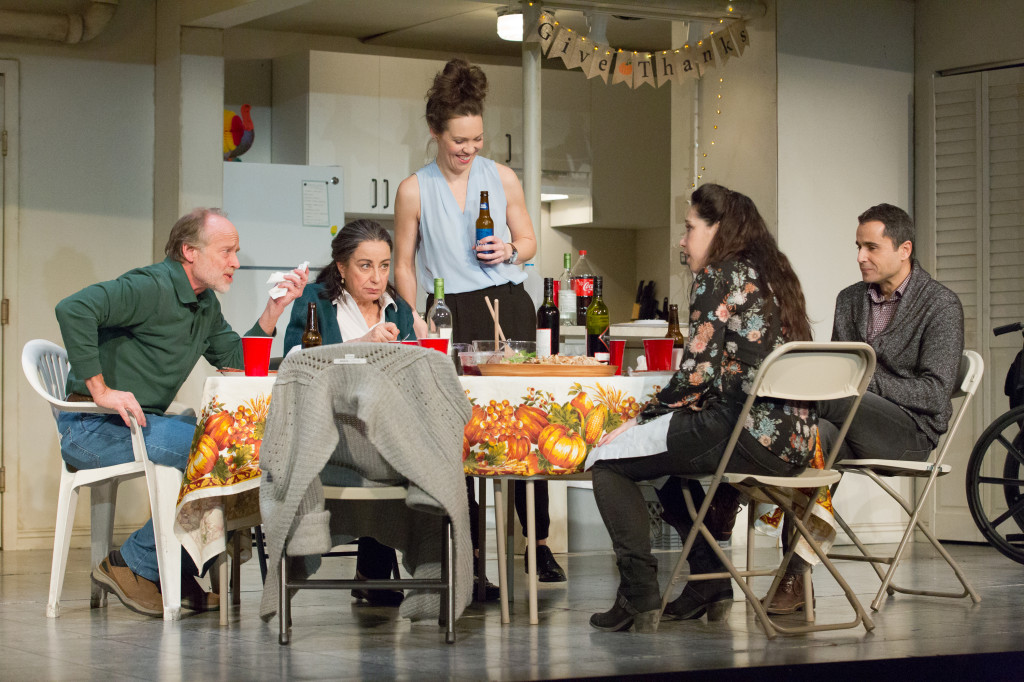 Stephen Karam’s drama, THE HUMANS, is one of the most honored new plays of the last few years, winning over twenty best play awards in 2016, including the Tony Award for Best Play. It’s been described as “kind, warm” and “humorous and hopeful”. To be frank, for most (if not all) of the play, it is none of these things. It is an unrelenting tale of backbiting, shrewish daughters taking cruel stabs at their parents, a grandmother who has become a heartbreaking vegetable and tremendous burden to her son and daughter-in-law, with every one of the Blake family complaining and whining in a sea of self-pity about their lack of money and the unfairness of life. Integrity, shame, and respect for personal limits are nonexistent for this family.

The plot involves a family meeting for Thanksgiving dinner. The Blakes are arriving from Scranton, PA, to visit their daughter and her boyfriend who have just recently moved into an apartment in New York City’s Chinatown. The action takes place in real time, just over one hour and 40 minutes. The time is the present.

We meet the entire cast, save for the boyfriend who is busy preparing the dinner in the kitchen on the floor below. It’s a duplex, of sorts, reachable either by a spiral staircase or by leaving the apartment to take the elevator between floors. This is especially problematic since grandmother, called MoMo, is wheelchair-bound. Mr. Karam takes the popular cliché of the Thanksgiving dinner as locus for drama and pushes it to the nth degree. 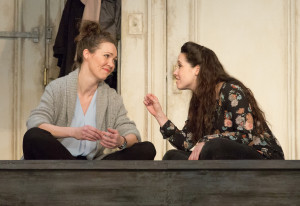 Fifteen minutes into the play, we are already tired of the Blakes, their bickering, insults, and seemingly good-natured jibes are wearisome. Alex Keiper as Aimee Brigid Blake masterfully creates a shrill, distasteful character that would make fingernails drawn across a blackboard welcome sounds. Her characterization of the spoiled, indulged, young artist Aimee, appears to be hysterically fueled by Mountain Dew, caffeine, amphetamines, and neurosis. Early on, she is often at odds with her laconic, worrier father, Greg Wood’s Erik Blake.

The sister, Aimee Blake, is played by Jennie Eisenhower. Deirdre Blake is played by Philadelphia acting legend Mary Martello as a dry-witted, smart aleck-y, although good-natured mother, who in her own words is about 61 years old. Completing the upstairs acting troupe is Sharon Alexander as Fiona “MoMo” Blake. Wheelchair-bound and afflicted by Alzheimer’s, she has the easiest job of all, since she is mostly unconscious, mumbling, or shrieking during the entire play. Richard Saad as the live-in partner of Aimee, is, for the first half of the play, downstairs in the kitchen.

Once the action moves downstairs, their interpersonal relationships sour quickly. We learn of Deirdre’s penchant for e-mails which annoy her daughters. One stray comment is about an e-mail about a lesbian suicide sent to Brigid, which we later realize is due to Brigid’s break-up with her lesbian lover. We hear Aimee’s cruel snipes at her parents, and of Richard’s studies to become a social worker, as well as the fact, nonchalantly stated, that in two years, at age forty, he will inherit a considerable trust fund. This begins a vicious tirade from Erik Blake. And so on, and so on …. The odd conclusion (which takes an inordinately long time) is a pseudo-religious mumbo-jumbo which has the audience wondering, is Erik Blake claimed by dementia, like his mother, or has he died and is traveling towards the light?

THE HUMANS is a difficult play to like or to watch, with the only redeeming (or even half-way decent) characters being Deirdre and Richard. Many will find the play disgusting. In this play’s defense, who are the sympathetic characters in Hamlet, for example? Possibly only the guards, dead King Hamlet, and Ophelia. Indeed, many of our great plays are ambiguous, with ambiguous, often unlikeable protagonists.

THE HUMANS is written by a young, gay man with talent; he will be with us for many years to come. Whether you hate the play or think it brilliant is entirely up to you, and that ambiguity might be its truest strength.

One Reply to “THE HUMANS (Walnut St): A nauseatingly annoying play, but maybe that’s the point”