Have you ever, on a dare, performed in front of a bunch of people? This is becoming a familiar trope. Usually, it’s the origin story for a stand-up comic. Friends dare them to perform, they get up and do it, and that’s how they find their true self. Performance becomes a crucible of transformation. Simple enough. 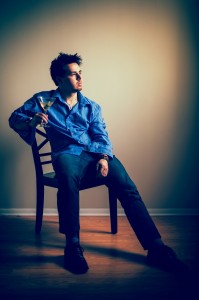 Harder, though, is to make the same journey but without the benefit of yuks. Frank Perri takes that risk with DOUBLE BATMAN, a powerful monologue of loss, withdrawal, and reemergence basically explaining why he is doing a powerful monologue of loss, withdrawal, and reemergence in front of strangers. The most important thing to note about the show is that it has almost nothing to do with the superhero. The title is instead a dark joke, a college nickname referring to his loss of two sets of parents (he’s adopted). Of the four, he only got to know the father who raised him after his mother’s early death, and the main things his father had to pass on were how to keep emotions cooped up. As a result, he’s been able to make friends and hang out, get drunk and tell funny stories, but not to connect very well. Perri still has a shell, but he’s not shut down, and is eager to open up and start connecting. [Biello Martin Studio] September 7-21, 2014; fringearts.com/double-batman