Attempting to embrace “the space between…the familiar and unfamiliar” dancers run rampant through five “interfaces” of movement in #SHAMANICINTERFACES. After looking passed the obscenely obvious panty lines and fact that the dancers wear distracting pajamas that add no value to the overall performance, the improvised steps begin to look more fluid, especially with dreamy, live visuals created by Dejha Ti. The guitar riffs and sounds effects produced on the fly by Tim Motzer and Manfred Fischbeck add more meaning to the movements, as audience members are given the option to interact with one another and the dancers. 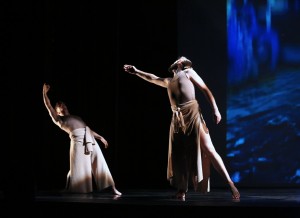 After the first interface blends with the second, in sync choreography seems to more easily flow in interface three. Segments such as “the big bang” and “a room a dream wakes up in” are acted quite remarkably, as strong facial expressions match punchy transitions and unusually beautiful lifts. The strikingly refreshing fifth interface begins with dancers moving on an imaginary grid, using careful footwork to avoid curvature in motion. The tightness of the grid formation is a visual reprieve from the sloppy maneuvers prevalent in the other interfaces, and audience members are invited to head to the stage once again to become part of the interactive experience. Though I was not inspired enough to enter the grid, I foresee mentally referencing this interface next time I am walking through a crowded city street, and doing a funny little dance with a passing stranger or two. [CEC Meeting House, 3500 Lancaster Avenue] September 20-21, 2014; groupmotion.org, fringearts.com/shamanicinterfaces.