“A Guy Cheated On Three Different Girls Who Found Out And All Met Him At The Airport. Important life advice: Don’t be this guy.”

Yes, this actually happened in real life. I yanked the headline straight from Buzzfeed. Oddly enough this is also the basic plot of Brandon Monokian’s apparently timely Peter Pan Is Dead, everything except the real-life douchebag at the center of the news story is an average grocery store clerk. Ha! A douchebag bagging groceries! Ah, justice! 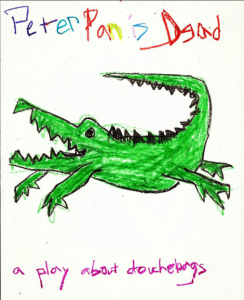 Monokian elevates his play to mythic proportions centering his story, as the title suggests, on the classically pesky Peter Pan. Featuring young actresses, whom you may have never seen before because they are fresh out of college: Ali Gleason, Caitlin Gutches, Colleen Kreisel, and Josephine Patane. In the playbill all four actresses open their bios by saying, that they are: “Thrilled to be in Philly!” ..beyond excited to be working with Monokian…are so excited to be making their Philly Fringe debut in this wonderful show! The enthusiasm of this production is infectious; Fringe exists for productions just like it. [William Way LGBT Community Center, 1315 Spruce Street] September 6-21, 2014; fringearts.com/peter-pan-is-dead.