Max’s (Tom Trudgeon) promiscuous lifestyle in the Berlin of early 1930s changes in one night when as a result of The Night of the Long Knives, homosexuals are suddenly being persecuted by the Nazis, and Max is forced to flee Berlin with his partner Rudy (Chris Melohn). They desperately struggle to stay out of Gestapo’s hands, but their discovery is tragically inevitable. After Rudy’s traumatic death, Max’s survival instincts overpower everything else in him until he re-discovers his humanity and identity with fellow prisoner Horst (Doug Cashell). 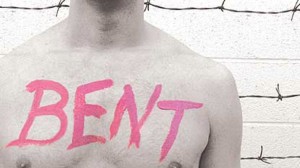 A lot of hard work and heart went into this production, and it shows. The set is minimalistic and works well with the large basement space it’s in, as well as with the bleak locations and themes of the play. The actors’ fine performances and the touching script are given the room they require by the restrained direction, while the occasional moments that approach melodrama are balanced with touches of dark humor. Despite being a bit too long—the second act could have at times had a brisker pace—BENT is a quality production of a culturally significant play. It doesn’t  bring anything particularly new and innovative to the interpretations of this well-known play, but is certainly worth seeing—especially if you haven’t had the privilege to see a production of BENT before. [Power Plant Productions, 233 North Bread Street] September 11-20, 2014; fringearts.com/bent.

One Reply to “BENT (Truth Be Told Productions): Fringe Review 43”