Every fan of the Philadelphia Fringe Festival has seen Josh McIlvain’s work—even if they haven’t seen his theatrical work. For the past few years Josh has edited the Fringe blog and the much-used Fringe Guide, a thumbed over, marked-up copy of which probable lays on your coffee table right now.

As cofounder of SmokeyScout Productions, Josh has also produced several Fringe shows of smartly silly original comedy shorts. SmokeyScout’s recent endeavor—the Nice and Fresh series—attracts large audiences and top local theater and dance talent to Northwest Philadelphia.  For the 2014 Fringe Festival, Josh is changing things up with a new one-man show, SLIDESHOW, which explores the erstwhile phenomena of the slideshow party at four venues around Philadelphia. Phindie talked to Josh about his show and his work for FringeArts.
—

Phindie: What inspired this show? Do you have fond memories of slideshows from your childhood?
Josh McIlvain: I do have fond slidehow memories, my mother made excellent slideshows—it didn’t hurt that she is a photographer and so the photos were really good, and carefully selected. But I also remember slideshows from family friends (likely of the artist variety) that were equally engaging, and the sense of a real event—it was something everyone could do together, bringing together friends, family, neighbors, and also kids and parents (note: SLIDESHOW is not for kids). I know people also have memories of unending slideshows, but everyone has distinct memories of this ritual–one friend of mine mentioned having to sit through a slideshow at a shore house as a kid, where they were a guest, and vomiting on the expensive rug during the slideshow. I hope no one does that at the show, but it could add something to the experience.

The show was inspired initially by finding, in my late grandmothers attic, various old camera, film, and slide equipment, very well kept, dating back to the 50s. I brought some of this home with me, including the slide projector, with the thought that I might one day make a show with it. I also found, but did not take, some old slides of a vacation that had had at a lake I could not identify and with people I did not know. The slides were fairly dull, but I was intrigued by the idea of being so disconnected from the experience/lives of members of my family.

So I began to play around, in my head, over the next year or so, with the idea of doing a slideshow as a theater show. Since the slideshow was, in essence, a type of performance (good or bad), with featured text, speech, and images, all given a narrative, it make a natural platform for theater, where the audience experiences the show as it would a regular slideshow. I also liked the idea of dropping people back in time into a ritual that was so much a part of people’s lives from the 50s to 80s, but had since completely disappeared. Everyone over a certain age (say 35ish) remembers the slideshow. 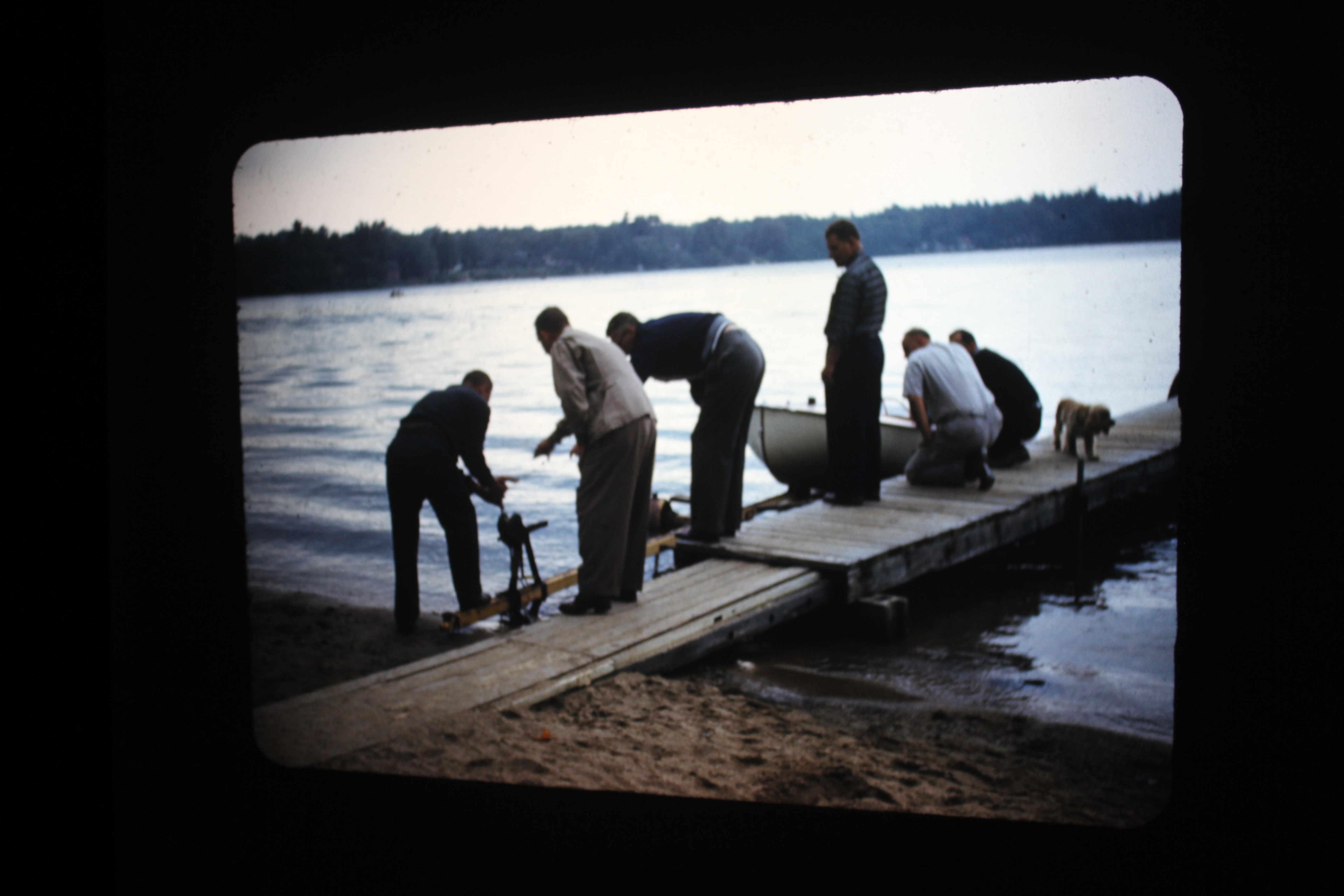 Phindie: What do we miss now there are no longer slideshows?
JM: I think it was a form of social in-home entertainment that does not exist anymore—created and performed by the hosts for their guests. I also think the slideshow had an aspirational element to it. The slideshow celebrated your/your family’s achievements on the screen for an audience. And screens brought an aspect of big-time entertainment into one’s house. In the 60s/70s, one of the ultimate features of “making it” was having your own screening room/movie theater. For me that provides a lot of material in creating a fictional slideshow and the various themes on family and the nature of aspirations across generations that come out of it—since these are inherent in the presentation. 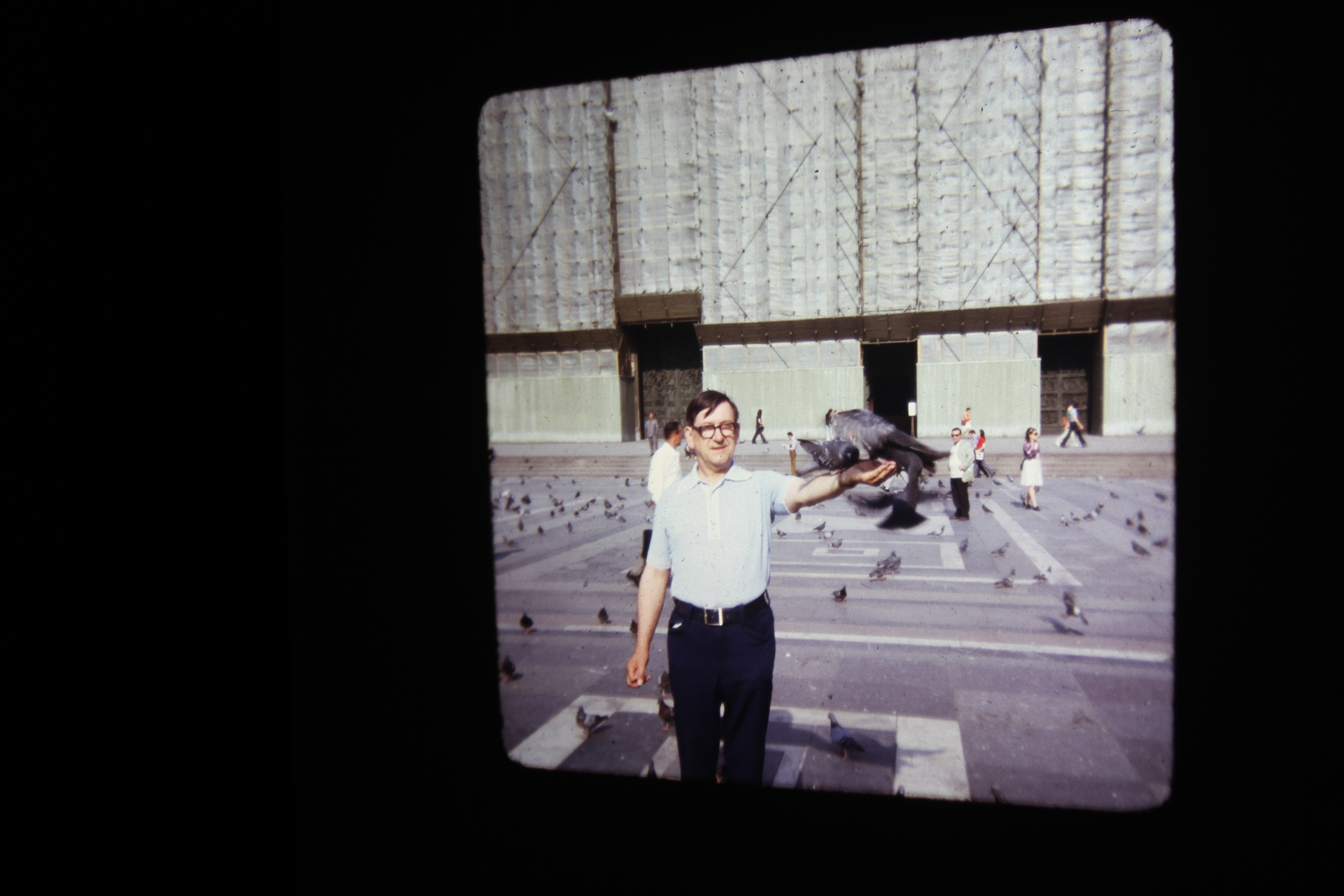 Phindie: Where did you get the slides and how did you pick out the ones you want to use?
JM: First I put out a call, on various listservs to see if anyone wanted to donate their old slides—assuming people have boxes of thousands of slides unopened for 20 years in a closet. But because I would not be returning these slides, I think people shied away from actually giving these stored memories away—I was specifically looking for families, families on vacation, families hanging out, etc.

So I turned to ebay and incredibly, people were selling other people’s slides of their vacations/lives. Equally incredible, I had to bid against others who were for reason interested in buying these things. So I bought a number of slide lots off ebay, all of which are used in one way or another, though the show follows one family in particular. 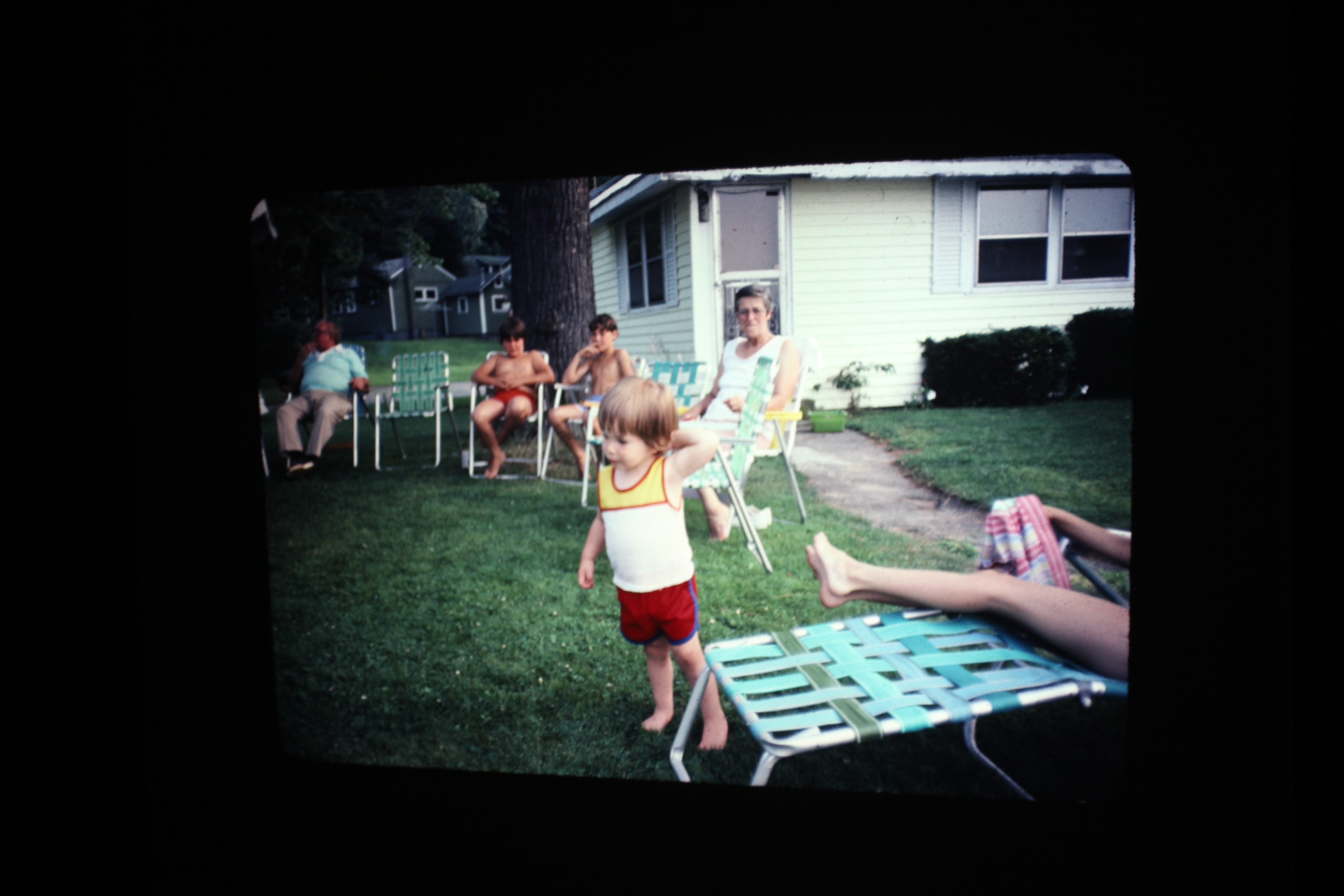 Phindie: You’re doing this show in four very different venues. What do you like about each and how do you think they will affect the show?
JM: I wanted to the show at multiple venues because it is such a mobile show– I project the slides from an old slide projector onto a portable screen and perform from the middle of the audience—that’s all the set up there is. And as the Fringe Festival has really spread into different neighborhoods, thus the Neighborhood Fringe conceit (South Philly Fringe, Old City Fringe, Northwest Philly Fringe, etc.), I want to take advantage of multiple locations, which is definitely in the spirit of the festival.

The first show is in the small living room of a rowhome (Chris the Brit’s House, a solid guy), with very limited seating, and I’m imagining this will be the most ideal setting, because the audience will be entering an actual home.

I’m also doing a show at WetLand, which is Mary Mattingly’s houseboat/art installation on the Delaware Ave—a project commissioned by FringeArts. I’m very much looking forward to a slideshow on a houseboat because that’s like 70s squared.

The two other venues—Headlong Studios on South Broad and Moving Arts of Mount Airy are more studio settings, with more seating but also fairly intimate, and in Mount Airy, particularly, a very neighborly appeal. The nice thing about the studios is the ability to spread out a little but still maintain the feeling of an informal gathering. 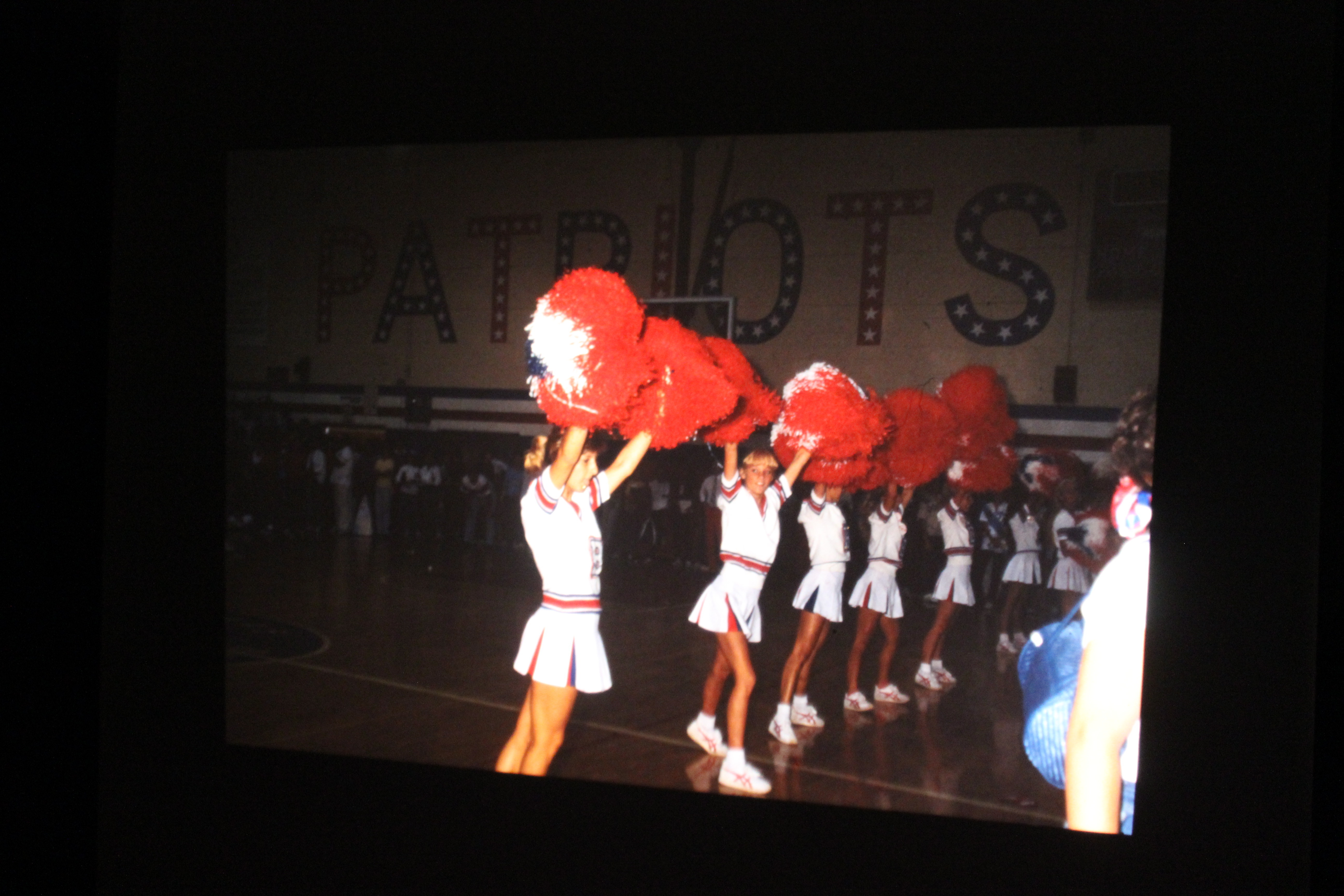 Phindie: In previous Fringe’s, you’ve directed a group of actors in series of comedy shorts, how does that compare to working as a solo performer?
JM: SLIDESHOW is a much more experimental show, and I’ve wanted to put together a full-length solo show that I could tour. My previous Fringe efforts, Boat Hole (2010) and DEER HEAD (2011), were meant to build attention and audiences for my work in Philadelphia—though the humor was often far out there, the shows were also meant to offer audiences a pretty safe bet.

But now, as I am experimenting with creating different kinds of work more, I felt that the Fringe Festival is a good testing ground for one of my more off-the-wall endeavors. And the immersive nature of the presentation, as well as how the show was created, fits very much into being the kind of Fringe-y show people might take a chance on. 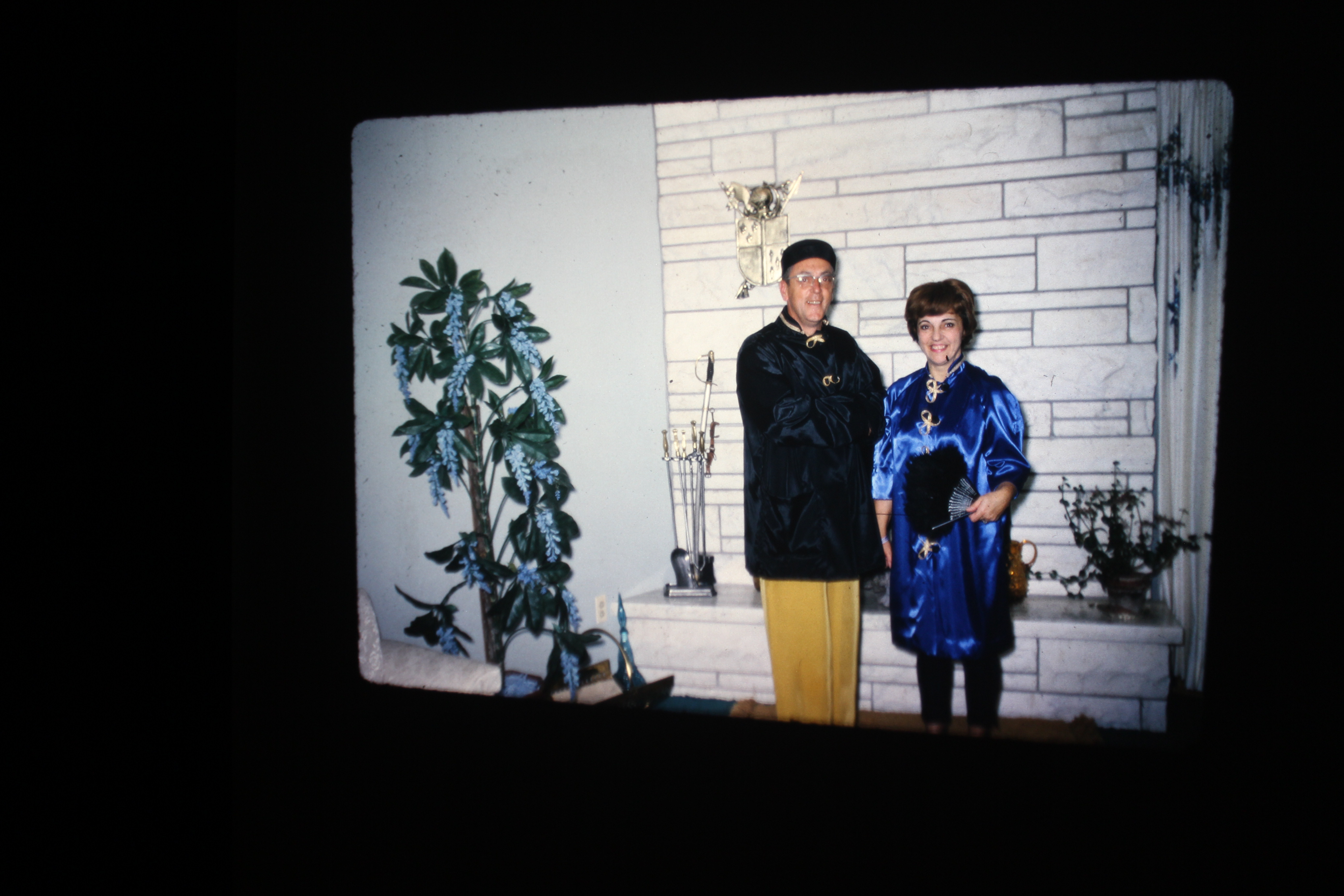 Phindie: SmokeyScout’s Nice and Fresh series is an awesomely Fringey idea. [What is it?] Will it be back this fall? Any plans to expand it to Center City?
JM: We are indeed returning with a 2014/15 Nice and Fresh season, our first show is October 3 and 4.

Nice and Fresh is a performing arts series we started last year in Northwest Philly (specifically at Moving Arts of Mount Airy and the Philadelphia School of Circus Arts in Germantown), which features four acts each show by artists of various disciplines (theater, dance, circus arts, everything in between). Each piece is about 15 minutes and has to be new (or at least from that year). The idea behind the series is that—on a regular basis—creators needed to create, performers need to perform, and audience need to go see new work (tickets are only $7).

Another aspect to the series to feature venues in Northwest Philly (Germantown, Mount Airy, Chestnut Hill), and to appeal to audiences in the area so that they can see original, contemporary performance for mature audiences in their neighborhood. It’s been fun to get some audiences from Center City out here, but our goal is to grow an audience from this area (the second highest performing arts ticket buying population), which is often ignored. So, no, we won’t be doing Nice and Fresh in Center City, though I have thought of doing occasional “Best ofs” elsewhere. 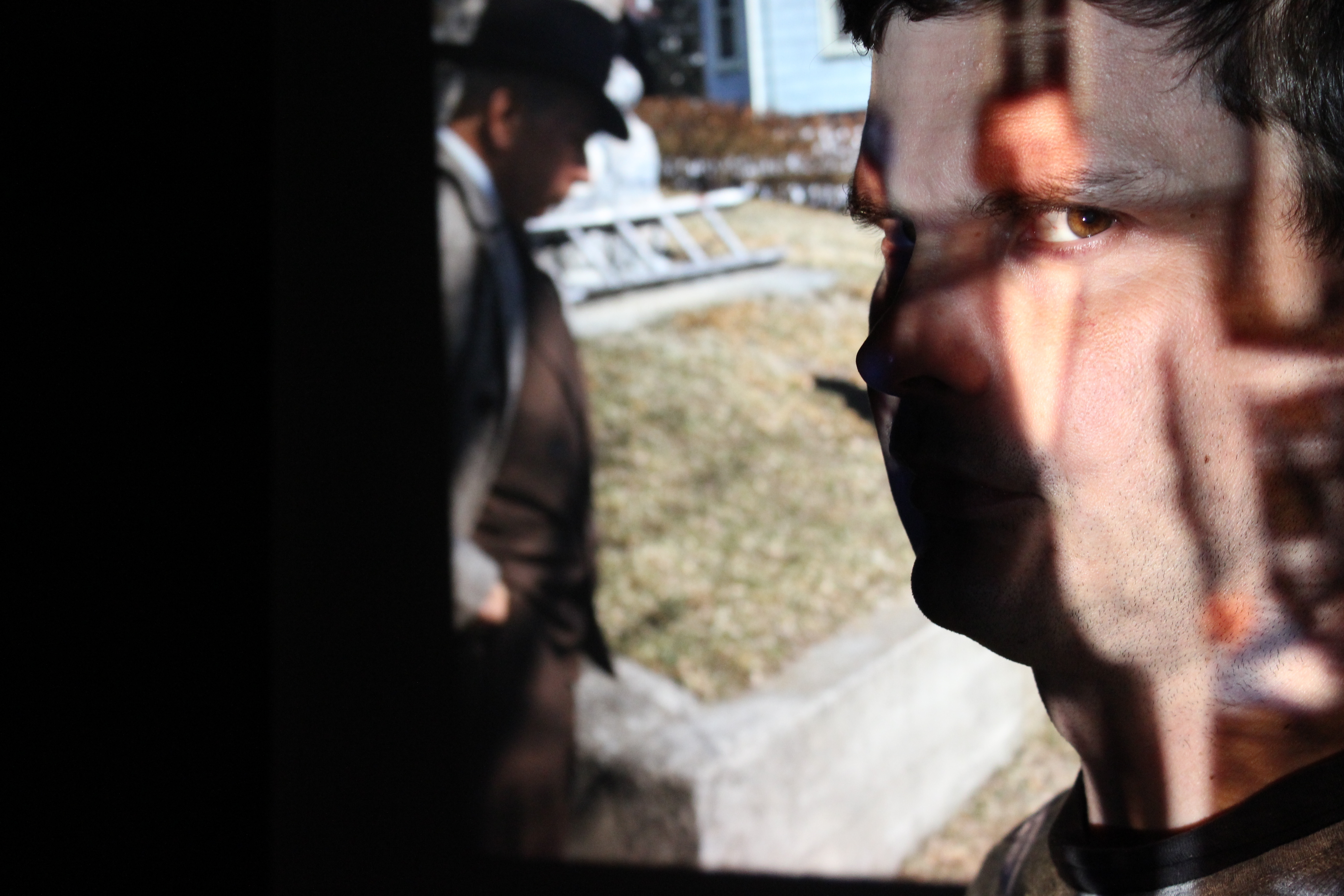 Phindie: You’re also editor of the great reference for Fringe goers, the Fringe Guide, and of the Fringe blog. What do you like about the view this provides onto the festival?
JM: More than a view into the Festival, I am able to really acquaint myself with a broad swath of performing artists in the city, and get a pretty good sense of the performing arts landscape here. It’s been a great education in seeing the kind of work that is being done in the city, and a refreshing reminder that there are many different ways to approach the stage. 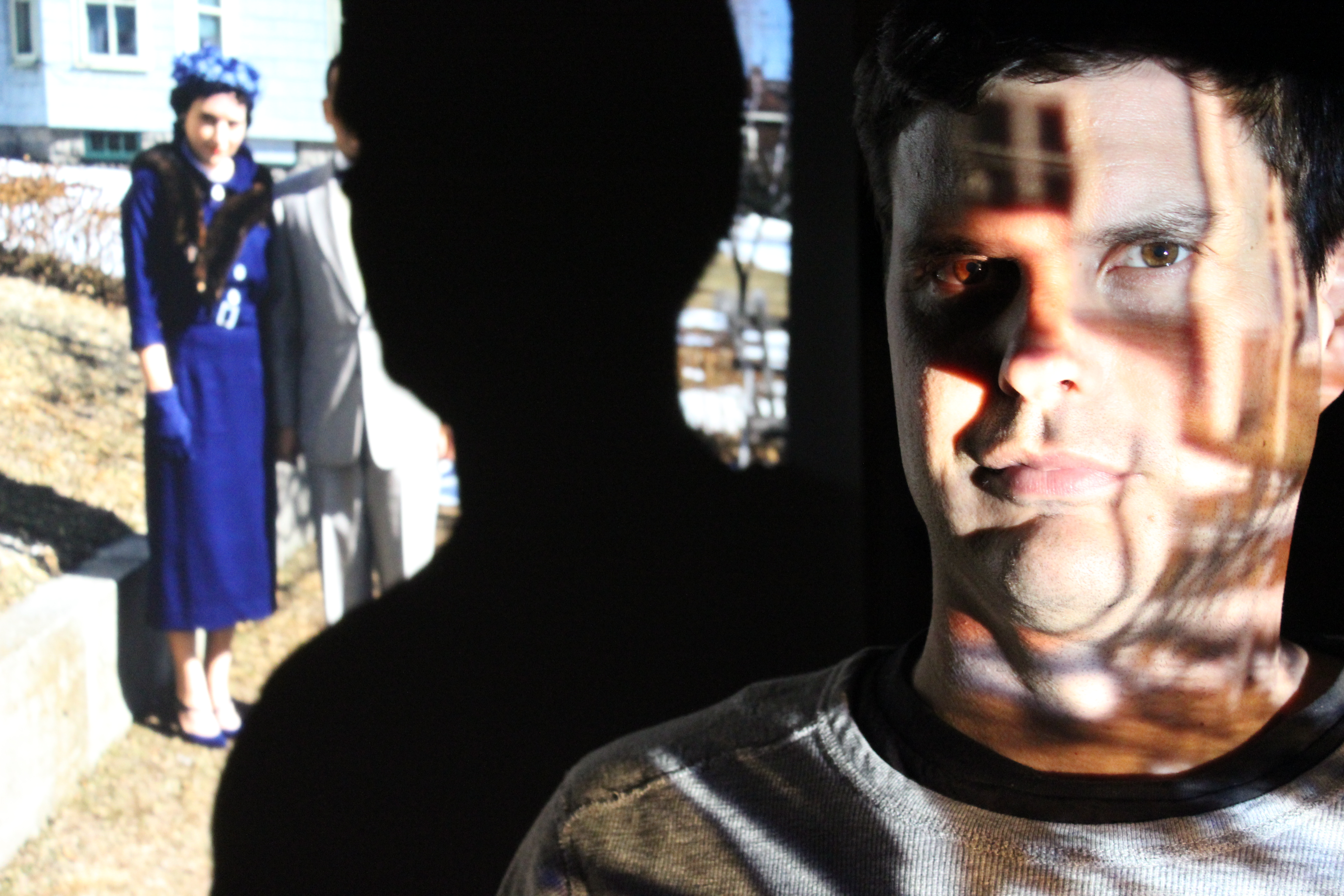 Phindie: Will you get the chance to see any other shows? Any tips?
JM: I am going to see other shows, but I am unable to plan for anything till after my opening performances—every minute of my free time is all taken up with getting SLIDESHOW ready, and any other planning will make my head explode. I do think everyone should see at least one show that they know no one in the production and just pick out of curiosity.

[disclosure: the September 8 + 9 shows will take place at the house of Phindie editor Christopher Munden)

Chris the Brit’s House
(House show with only 10 seats! Tickets must be purchased in advance, exact venue address will be provided prior to the show.)
Monday Sept 8 + Tuesday Sept 9 at 8pm

One Reply to “Fringe interview: Josh McIlvain on SLIDESHOWs and editing the Fringe Guide”