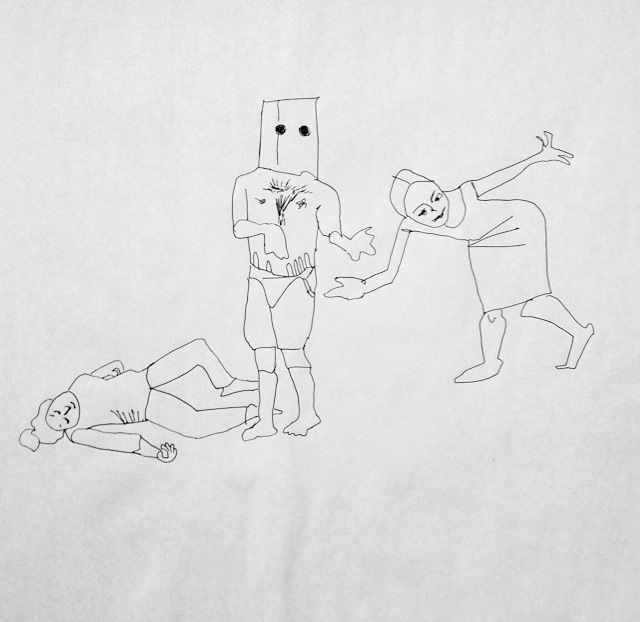 In SoLow, you redact the boring stuff—these tickets and grants and five-year-plans and most importantly the stages and lobbies and flashy pricey venues—which are meant to indicate to the audience member, yes, see this show and not those.

Let’s imagine that when SoLow redacts these walls, what results, remarkably, is not dust and rock and paper shreds, but sand.

A big pile of sand.

This episode we have a duo of grossness and a trio of madness, both in South Philly. 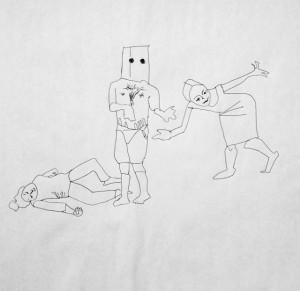 Headlong Performance Institute oughta take a look at its advertising campaign because it draws crazy people. One of those people is Alex Romania, a dancer and interdisciplinary performer whose tofuhotdog is being triple-billed with two more nutjobs (and rising stars of Philly’s off-kilter performance scene), Magda San Millan and Chelsea Murphy, who have created collaboratively since 2012. We talk about working together, working apart, and getting naked with hotdogs:

Julius Ferraro: What inspired What Sanity?

AR: Magda and Chelsea saw a piece that I performed at Said Gallery about a year ago. Magda told me she was a little disappointed, that I was so crazy and that she didn’t see that in my work. I was inspired to let that part of me be shown in my work. My contribution, tofuhotdog, arises out of a personal abandon.

Magda San Millan: There is a through-line of character exploration [in my work] that spans the past several years. It is a mix of two personalities: the bitter feminist and the spacey artist. [I have] performed variations of these personas for the past five years, and they show no signs of disappearing.

Chelsea Murphy: There is an obsession with levels of awareness and physical sensation in live performance. If my body is experiencing and expressing a state of heightened physical awareness, but my mind is muddy and my eyes are off—what does that look like? How does an audience read this? There is also the psychology of addiction layered on top. How that messes with awareness, sensation, and movement.

Chelsea Murphy & Magda San Millan in major thirds: In our first collaborative work, Rooster&Snowball, there is a moment where we rage at the audience on the subject of self-love. The assumption is that the audience has given us the bad ultimatum “No one is going to love you until you learn to love yourself.” This kind of advice was the thorn that started the yelling in this piece—because it is shallow and ultimately meaningless. Two years later Magda is doing a solo on bizarre and intimate forms of self-love. That’s what happens sometimes- we wrestle with the same question and many iterations of an answer for years.

JF: What are you doing in this piece that you’ve never done before?

AR: tofuhotdog is a work in progress. It is a space for me to show my dark parts, to have a process to really dive into them. I consider discipline as fluid in this piece, I rehearse alone, invite close friends in for feedback, I take risks to embarrass myself. It is highly personal, poetic and I am scared of performing it every time.

CMMSM: Two things: dipping our toes into the sorrow that previously has only been the undercurrent of comedy. Since making Rooster&Snowball we have been aware of the pain beneath the surface of the laughter—and egging each other to really commit to those qualities instead of masking them. In this piece—two years later—we are finally committing.

The other thing: making solos that are linked in process and subtle performance ways. Everything else we have made together has been a collaborative duet. Now we are trying collaborative solos. Meaning we are each present in the room as a director/choreographer for the other’s piece. And also, can these solos share movement vocabulary, thematic concerns, even the same power drill as a prop, and still be fully independent in performance? This is an experiment. 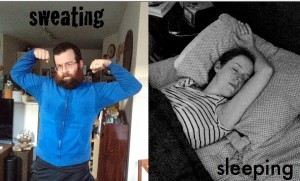 Steve Gravelle and Sara Nye are okay with being gross. We know this because of their collaborative coproduction, sweating/sleeping. Sara has seven years of tenure performing in Philly and is currently managing director/a company member of RealLivePeople. Steve, a performer, writer, deviser, and producer, created his first SoLow show, You Have 20 New Voicemails, last year. We chat about demonic basements and that-which-embarrasses:

JF: It seems like both pieces originate in one question. Coincidence or causality?

Steve Gravelle: sweating/sleeping started as an exploration as my life as a constant, chronic sweater. The medical condition I have, hyperhidrosis (a real thing! I swear!), is sort of swept under the rug in our culture. No one wants to admit that they sweat, going to great lengths to hide it. But I don’t have the luxury of pretending I’m not a huge sweater, so I decided that “If You Can’t Hide It, Flaunt It” would be my guiding principle in the creation of this show.

Sara Nye: We discussed the possibility of the show needing a second performer, a supporting role, but the more we talked about it, the more we realized that instead, it should have a companion piece. He knows my history of falling asleep in embarrassing or inconvenient places, so he suggested that I also tackle something with which I’ve struggled.

JF: How did you decide on a space? How’s it affecting the pieces?

SG: We always knew we wanted to use a house. My piece would be set in the basement, full of red light and darkness to reflect the demonic feeling of my sweating. A basement as a dungeon where my sweating makes me feel (emotionally) confined. And Sara’s piece, sleeping, pretty much easily went into a bedroom. The bed, obviously, but also the fact that we spend most of our bedroom time sleeping . . . it just made sense. It happened that a dear friend of ours bought a house a few blocks away, and SoLow falls perfectly into the gap between when she settles on the house and when she moves in. So we’ll have a great row home with no furniture that we can dress up however we want.

SN: Yeah, I feel like inviting audiences into a house that is not yet lived in is really interesting. It will be truly very empty, except for our work, so I think it will feel a bit surreal to walk through an empty living space, a house but not yet a home, while experiencing two pieces that discuss very personal topics.

JF: What are you doing in these pieces that you’ve never done before?

SG: I’ve written and performed before, but never autobiographical material. Being a sweater is considered deeply shameful in our culture, and so I’ve learned to hide it, cover it up, deny it, and work to eliminate it. So pulling that story out into the open is huge. It was hard to tell people what the show was about at first, but the more I talk about it with friends and family, the more I feel comfortable sharing. And I’ve been so surprised about how much other people want to share their own sweating stories!