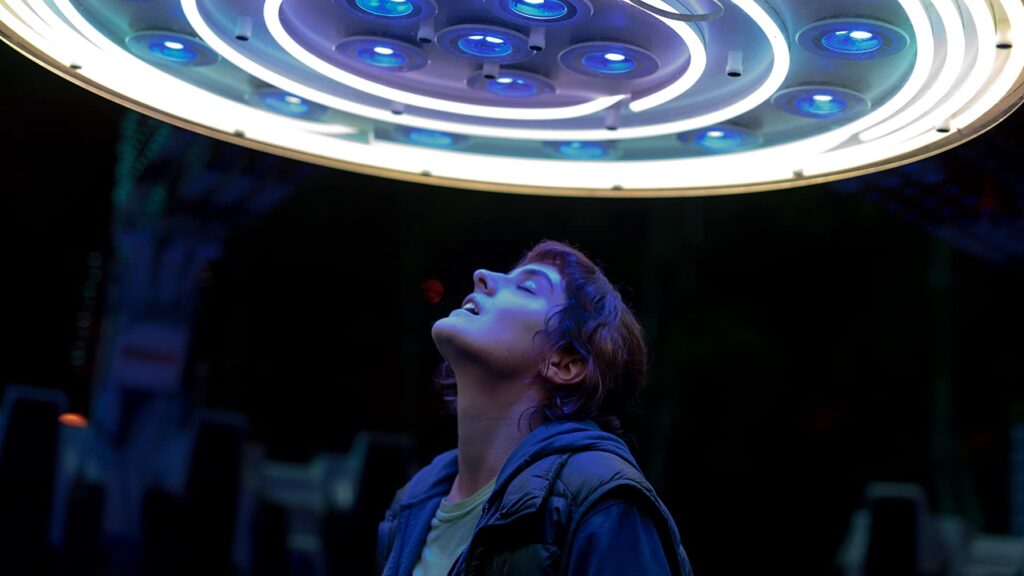 Jeanne lives at home with her mother, and spends her days working in an amusement park. She’s a bit off, with other characters making a passing reference to some sort of non-specific mental/social limitation that she suffers from. Functionally, she’s awkward as hell, so naturally she’s not too popular in the dating world (a tough sell given that the actress who plays Jeanne, Noémie Merlant is heaven on the eyes — but she’s such a talent that she can pull it off).

One day, a new attraction is unveiled at the park. It’s your standard lightbulb-adorned, trailer-ready ride you’d see at any park, but there’s something special about this one that Jeanne can’t shake. She nicknames it Jumbo, and before long she’s sneaking into the park after hours to spend time with the machine.

Jumbo manages to accurately depict the feeling of romance as well as accurately describe the feeling of fetishization. No line is drawn between the two, since this is a film that does not judge the desires of its main character. Yeah, it’s a bit weird that she has a sexual attraction toward a machine, but she’s not hurting anyone, and Jumbo makes her feel good. We should all be so lucky to feel this way about someone/thing! This causes troubles for Jeanne, both amongst friends and family, but the strength she finds from her new romance should be enough to carry her through.
It’s a quirky film to be sure, but one that never feels twee. It’s honest, light, and quite artful to look at.

One scene in particular, meant to surrealistically depict the physical feelings Jeanne has for Jumbo, is a visual standout. Another, in which we get to see the electric nighttime beauty of Jumbo through Jeanne’s eyes, makes it easy to empathize with our hero, and showcases some powerfully effective cinematography.