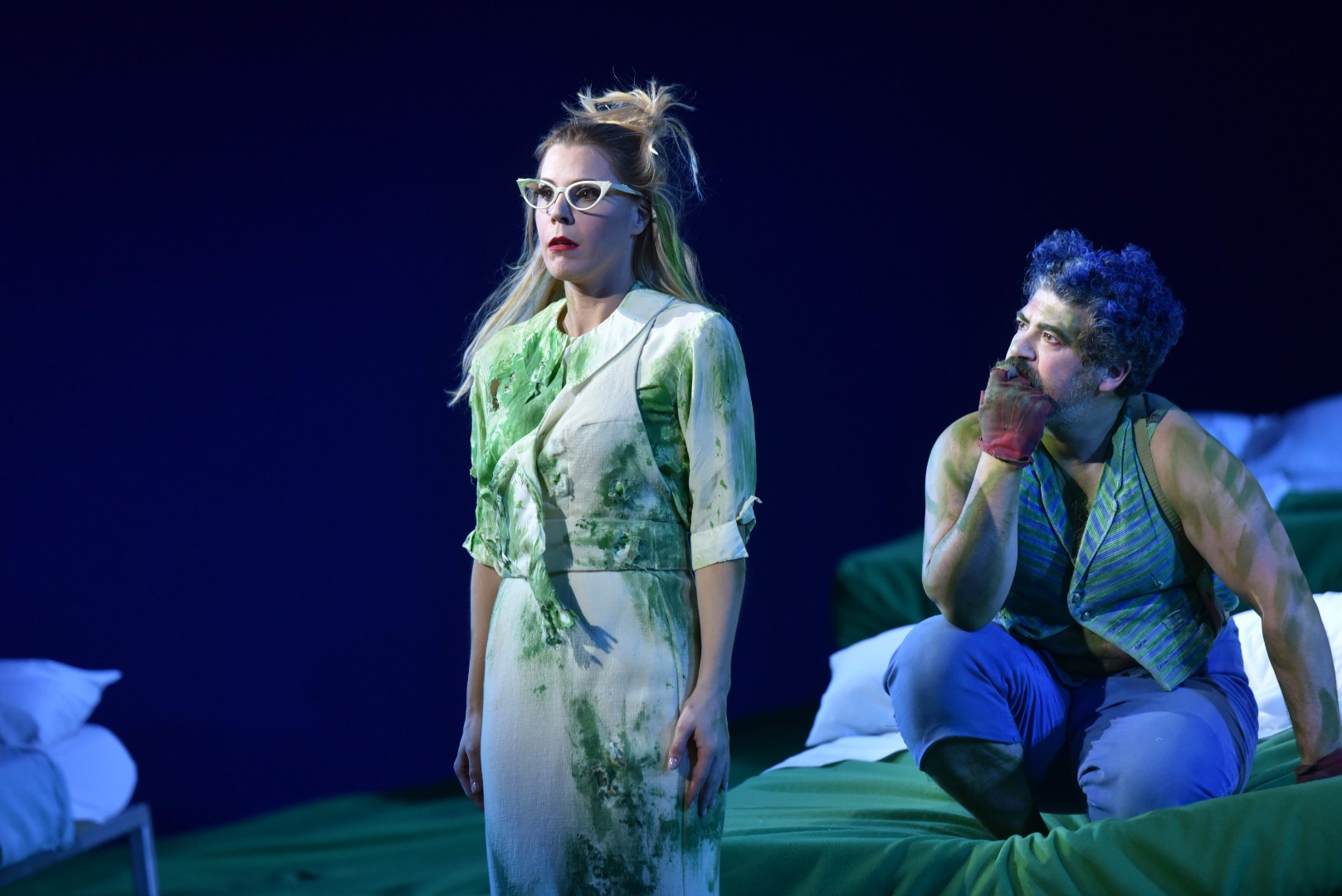 What a lark!  Shakespeare’s lovable comedy about love, A Midsummer Night’s Dream, arrived at the Academy of Music, and will be there next Saturday and Sunday. Benjamin Britten’s limpid, slippery music conducted by Corrado Rovaris. and these splendid voices make Opera Philadelphia’s production a complete pleasure. It’s notable that Robert Carsen’s production has toured the world for twenty-five years, but Opera Philly’s production is its U.S. premiere.

It begins with an enormous world: a bright moon in a vast sky overlooking a huge bed—what’s a bed for if not love and dreams—with a green coverlet set on a green ground. Soon many many fairies arrive—a chorus of children who look tiny against this backdrop. They, too are all in green, with bright red gloves.  So much green!

Northrop Frye, the great literary critic and scholar, wrote about what he called Shakespeare’s “green world,”a place of nature where all the foolish restraints of the civilized, urban world are removed. And so, off we go, into the woods.  Many bravos to the designer of all that greenery in the set and costumes, Michael Levine. 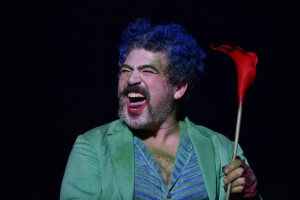 With stately elegance, the royals of the fairy realm arrive: Oberon (Tim Mead)—surprisingly composed for a counter-tenor— and Tytania (Anna Christy). This power couple is having a power tiff—never underestimate a marital tiff when there are magic powers (and a great soprano) involved.  Subplot #1.

The story is then complicated by the arrival of four young lovers, escaping from Athens; Hermia (Sienna Licht Miller) and Lysander (Brenton Ryan) are fleeing her father’s stern prohibition of their marriage, while Demetrius (Johnathan McCullough) is hopelessly in love with Hermia and he, in turn, is pursued by the smitten but unrequited Helena (Georgia Jarman).  Subplot #2.

Oberon, who has already ordered Puck (Miltos Yerlemou) to fly around the world and fetch a cupid flower, uses this to sort out these young lovers so that they wind up with the right people who love them. His main motive is to sabotage his wife, and he drops the flower’s elixir into her sleeping eyes, so when she wakes she’ll fall in love with the first thing she sees. Subplot #3.

That thing will be Bottom (Matthew Rose) who has been transformed into a donkey. He is one of the Rude Mechanicals, a bunch of local workmen who are getting up a play and who will discover the joys of theater. Subplot #4.  Their play within this play is about two lovers, cruelly separated by a wall (big laugh from the audience). Subplot #5. I usually find the rustics annoying, but somehow singing transforms this whole scene into great fun. Subplot #6.

The second power couple, Theseus, the  King’s (Evan Hughes) has wooed the queen of the Amazons, Hippolyta (Allyson McHardy),  and they arrive resplendent in jewels and satin. Subplot #7. The two young couples join them for a triple wedding.

Visually, musically, and vocally gorgeous, this is a delectable Midsummer Night’s Dream.

Check out more takes from the dilettante at large>>>

One Reply to “What A Lark: The dilettante at large has A MIDSUMMER NIGHT’S DREAM with Opera Philly”