I went to see the Arden Theatre’s energetic production of A DOLL’S HOUSE – PART 2 with some trepidation. Why is a guy taking on Nora’s story and why hasn’t a woman tackled this, I wondered. But it had gotten good reviews, was the most produced play of 2018, and I was curious.

Then I asked myself some more questions. What did I think about Nora’s future after she had slammed the door at the end of Henrik Ibsen’s original A Doll’s House? I had always assumed that she would be all right. As someone who has reinvented herself several times, and as a one-time fan of those romantic novels portraying spunky young women succeeding against all odds, I did not automatically assume prostitution, destitution, incarceration, death, or perhaps even worse, remarriage to another savior, as her fate.

Would she have to do work for which she was unprepared, that she found distasteful? Perhaps. Would she be dependent on the kindness of others? Probably. But aren’t we all at some point.

Playwright Lucas Hnath has imagined Nora as a successful writer – a writer who succeeds based on telling her story. A kind of #MeToo moment at a time when women had very few rights. But in Nora’s world, the character she wrote about had to ultimately die, just as Thelma and Louise had to (spoilers) drive off a cliff, to be acceptable as the penance for demanding too much freedom.

Hnath does a good job of creating a dilemma for each character based on Norway’s repressive moral laws, and each character’s economic status. But primarily the play is an intellectual discussion about our options in relationships and the consequences of our choices on ourselves and on others. 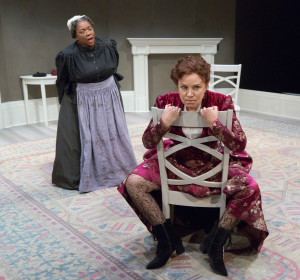 The roles of Nora (Grace Gonglewski) and Torvald (Steven Rishard) are a reversal from the original – Nora is now stern and uncompromising, while Torvald has become a sniveling wimp feeling sorry for himself. Although the role of Nora was inhabited impressively by Gonglewski, I never felt I was seeing a flesh and blood woman in front of me who had struggled with her choices and emerged triumphant, while this Torvald seemed too soft for his side of the conversation. Similarly Joliet Harris as the nanny, Anne Marie, and Grace Tarves as Nora’s daughter Emmy seemed designed more to hold up their end of the discussion than to be full-blown characters.

Reviews of other productions comment frequently on the knocking on the door as Nora returns. In this production, director Tracy Brigden replaces the knock with a jarring doorbell. Taking us into the present day, where the language and attitudes of the play are in opposition to the rules that govern the dress and lives of the characters. It’s a bit disconcerting not knowing in which century to position yourself, but it works.

The discussion was indeed far ranging, eschewing easy solutions, but after the play ended, I was still left with my initial question. Would a woman have envisioned a different Nora? A different Torvald?

My Nora would probably have walked out the door and quietly moved on. But she’s not the voice we need to bring about change. Though Hnath’s Nora envisions a world without marriage, society still divides us by sex and joins us in couples. The single independent person is looked upon as an anomaly and sometimes a pariah. More Nora’s are willing to walk out the door, but many still stay trading boredom or worse for security and acceptance. #MeToo has set limits in the work place but not yet in the home and not everyone wants the same version of change.

So thank you, Lucas Hnath for advancing the conversation. You remind us that there are no easy answers, but at least we’re talking.

2 Replies to “A DOLL’S HOUSE, PART 2 (Arden): Imagining another Nora”