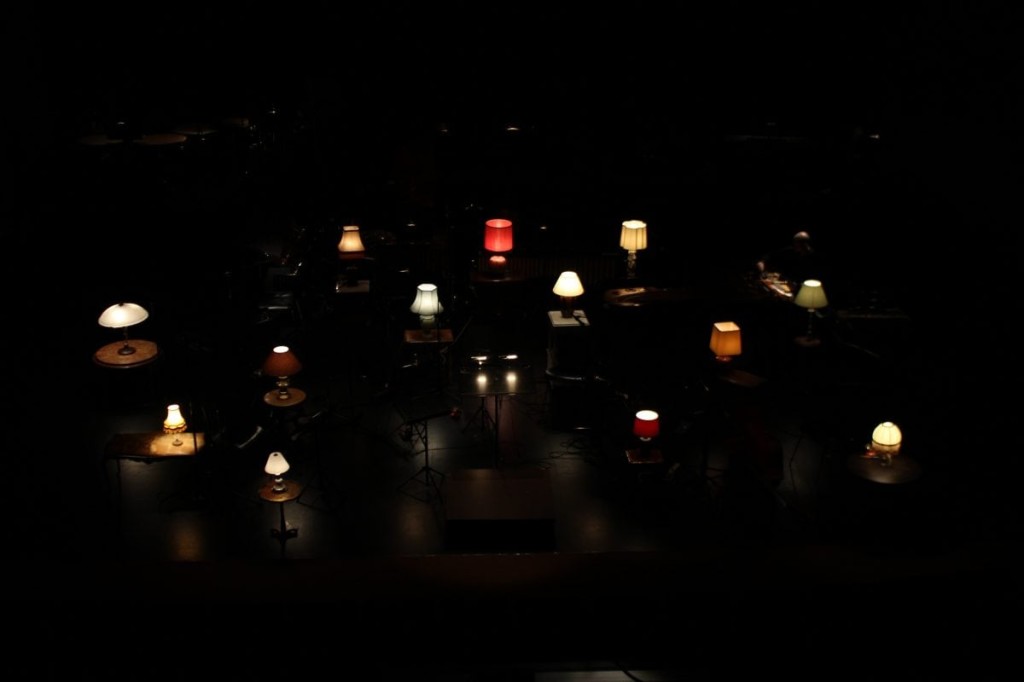 Heiner Goebbels’s celebrated SONGS OF WARS I HAVE SEEN has been touring world capitals since 2009, with pairings of different musical ensembles in each city. A Brechtian-tinged deconstructionist has constructed an imaginatively textured musical performance in which music, sounds, and speaking are of a piece. It is based on the war memoir Gertrude Stein wrote after leaving her famed Paris digs and moving out to the countryside, which came under the control of Vichy French (Nazi) collaborators.

Anu Tali, a woman with a long blonde ponytail and exceptional poise, conducts. The women musicians of baroque orchestra Tempesta di Mare and Philadelphia Orchestra, dressed in bright colors, are foregrounded on the stage. Men from the orchestras, MIB’s (Men in Black), are seated behind and above the women. Women musicians take turns reading short selections from the memoir.  The harpist (not listed in the program) sometimes sings softly. These musicians are not in traditional orchestra sections. Each, essentially a soloist, is seamlessly incorporated into the overall design.

This strikingly original performance is not so much exciting as it is a covert, experiential rumination on war, the somberness of war. The music pushes the scattered words and they seep into our heads. Gertrude Stein‘s small, gently ironic observations are reverberations of the rumblings of war on domestic life— like lack of food, the cold, and “anything like that.” “Everything is dangerous, life and death and death and life.” She approaches subjects such as “young Frenchmen who are not there anymore,” and there’s quiet terror in an oblique reference to Jews, “how anyone can be taken away.” SONGS OF WARS I HAVE SEEN is a cautionary tale and a brooding reflection by Heiner Goebbels, by Gertrude Stein, by the musicians, and in turn, a reflection by us.