Site specific works are nothing new to Philadelphia but two performances in the 2013 Fringe  Festival, ThElastic Air Project and Muse: The Body Overlooked promise to give audiences—both the accidental and the intended— something to talk about. 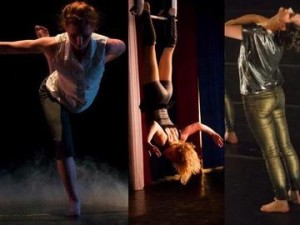 ThElastic Air Project, described by Kelly Adorno of Somatic Movers, as a “blue print of a dance” will take over Kahn Park at 11th and Pine on Sunday, September 8 at 12pm, 2pm and 4pm.  Muse: The Body Overlooked, produced by longtime friends and collaborators Kate Horton, Katherine Moore and Anna Fedak will turn the fountain at Logan Circle into a performance venue with a “wood nymph/greek goddess” feel on September 14th and 15th.

Because Horton, Moore and Fedak hail from Philly, New York City and Albany respectively, Moore explains that they view this year’s Fringe Arts Festival the “perfect performance opportunity for us to gather in the same place, create something together, and enjoy each other’s company while collectively making something to share with a public audience.”

Adorno, on the other hand, feels that her “way of moving is important and can have an impact on someone (hopefully everyone eventually!) SomaticMovers stemmed not only from me wanting to express my viewpoints through movement, but also developing a different way of approaching traditional modern dance.”  She cites her lack of flexibility and classical training as the catalysts for her movement style.  “Rather than pushing my body past my physical limitations I finally decided to embrace my so-called imperfections.  Now, I work in a turned in, low to the ground, parallel world.  My aesthetic focuses on the journey rather than the destination.”

In describing her movement style, Adorno lists “subtle actions and over all body awareness [that] create an environment that you can simply enjoy and not search for a deeper meaning (maybe there is one, maybe there isn’t).  Just sit back and watch.”  In a similar vein, Horton states, “generally we would identify as modern dancers. This piece specifically could almost be described more as performance art. We don’t do interpretive dance, we aren’t pretending to be trees or anything, its expressive, its athletic while maintaining a grace a flow, its being bold and making choices we haven’t made before.”

“The idea to use a public space came from Katherine and my solos from college,” Horton continues. “I wanted to be outside, in or around water. Many locations were considered but logistics for site-specific work can be tough. The [Logan Circle] fountain won because of its Greek inspirations, location and accessibility.”

Adorno describes a similar thought process, stating, “I have been playing with the idea of an outdoor show for several years now and I finally convinced myself to just go for it.  The dance piece deals with the concept of space, and I thought it may be overwhelming to have a large, empty park.  So the details of the more confined Kahn Park intrigued me and I could almost immediately see the possibilities.  Also, I absolutely love that area of the city.”  Her mixture of choreography and improvisation can “be molded to any venue/performance space/street corner it’s set in at any time.”  The outline for ThElastic Air Project was created at The Arts Parlor in South Philly and an excerpt of the piece premiered in a 4 x 8 box.

Describing her choreographic process, Horton confesses, “there was a lot of movement I had previously developed that I found wouldn’t work when I finally settled on the space. The reality of the space defines some aspects of the piece. There are some things you just don’t want to do on a gravel surface or in the water. […]  We always think we’re creating the dance but it’s actually the other way around.”

At Kahn Park, Adorno will be outlining the set up in chalk and will be on hand to answer questions.  “There is not much separating the viewers and the performers and I think that it could possibly generate some uncertainty for any individual who is accustomed to traditional venues.  I have taken a few steps to make the audience feel as comfortable and invited as possible, but we will be in a regular park and anything goes, even rain.”

Over at Logan Circle, Horton explains that “there is no set up for our show, no music, no stage, no chairs. It’s very much about the space and dancing in that space without changing it. We don’t want to detract from the fountain but instead incorporate it into the show. The goal in a space like that is not to have a traditional performance structure where the curtain comes up, you dance and then bow. The run time can change depending on a multitude of variables. How long did it take to walk around the people in the water? Did we have to adjust the movement do to conditions? Are we freezing and moving slow?  A lot of things can happen in an outdoor venue.”

Horton describes costumes and music as “immaterial […] we are letting the natural sounds of the city be our soundtrack.”  Adorno is also focused on simplicity.  “Fringe and glitter did not make the cut,” she states. “Neutral, pedestrian clothes are worn to keep this dance as clear as possible, it’s simply about space and exploration.”

One of the biggest challenges for Horton, Moore and Fedak has been the logistics.  “There is a ton of information you need to have for all the marketing done by Fringe,” explains Horton.  “I’m not a paperwork oriented kind of person so it’s been a new challenge sitting down and writing about the show, thinking linearly and explaining ideas in a manner that could be understood to other people. I ran an IndieGoGo campaign to raise money and that was another challenge. People want to know what they’re giving you money to do. I couldn’t fly by the seat of my pants anymore. Us artsy folk like to fly.”

Moore also notes the challenges of the collaborative process.  “One of the great things about working in the arts is that is brings people together in a very real way, but in a collaborative project like this where there is no choreographer and director telling us to stop fooling around and get focused, we have to be our own motivators.”