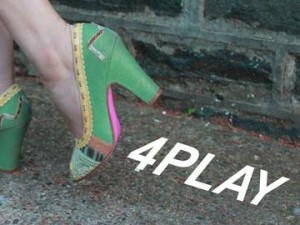 Short plays by unknown playwrights, mixed performances by rarely seen actors, an upstart company that takes statement-making risks: this is what the Fringe is all about. Polly Rose Edelstein’s Crack the Glass Theatre is committed to producing work by women writers and has chosen four works from the Los Angeles Female Playwrights Initiative for this year’s Fringe.

With this mission in mind, it’s noteworthy how male-focused the pieces in 4PLAY are: in the world of pre-Internet dating videos, a man boast the cliche of the three s’s (sincere, sensitive, sense of humor); a “man who hates women” is haunted by those he’s killed; an elderly man finds new life with the help of a female student; a man faces his bureaucratic maker. But what is expressed throughout is the control and power women wield over men. There may be caricatures, but there are no ingenues. And although much writing is heavy handed and some performances fall flat, there are enough unpolished gems for a fitting Fringe experience: favorites include Tess Kunik in a well-paced role of revenge, Sarah Braverman as a perfectly aloof Pearly Gates clerk, and Wade Corner as a reluctant visitor to the great DMV in the sky. [Grasso’s Magic Theatre] September 5-8, 2013. fringearts.ticketleap.com/4play.