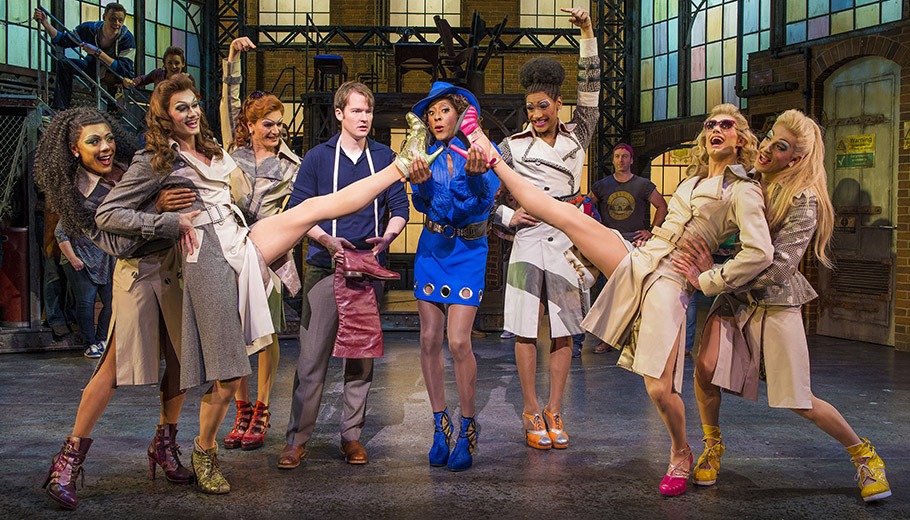 Seeing KINKY BOOTS every couple of years turns out to be a semi-good idea; I saw the Tony-winning New York production in 2013 with the amazing Billy Porter, and then I saw the show again, with a different cast, in 2015 at the Forrest. Now it’s stopping at the Academy of Music for a few days, and, like photocopying, each iteration gets a little less subtle, a little blurrier.

The musical, with a book by Harvey Fierstein and a score by Cyndi Lauper, (whose clever lyrics are mostly lost in the sound system) is based on a British film by the same name—a charming, very English drama, which, in turn, is based on a true story.

The musical is lively and fun, and it’s got a winning message at its heart, summed up when the central character, a drag queen named Lola (Jos N. Banks) quotes the very quotable Oscar Wilde:  “Be yourself. Everyone else is already taken.” It’s a show about tolerance and self-acceptance.

The plot begins in an old-fashioned English town in an old-fashioned English shoe factory that makes brogues. Nobody wants brogues anymore. When Charlie (Lance Bordelon), the factory owner’s son and heir, goes to London, he meets Lola who is in need of fabulous boots with stiletto heels that won’t break under his weight. A niche market is born, the factory is saved, they take the boots to the Milan footwear show, and it’s a happy ending.

But what’s a musical comedy without a love story? Charlie’s fiancée (Hayley Lampart) is an ambitious, sleek London type; he finally realizes that the blonde cutie (Sydney Patrick) in the factory is the girl for him, although Patrick’s mugging is neither  quirky nor endearing.

The real stars of the show are Lola’s Angels, her group of dancing and singing drag queens (the two tallest of the crew are the standouts—impossible to guess which photos in the program belong to which performer, given the wigs and make-up) Gregg Barnes’s costumes) are razzle-dazzle.

The first act ends with the full-cast big production number, “Everybody Say Yeah.” But everybody didn’t say yeah. Actually nobody said yeah, a sure gauge the show hadn’t yet electrified the audience, although by the end they were all whooping and clapping like mad.