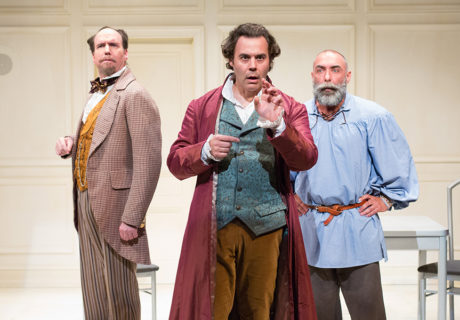 The title, long and frankly a bit dull, cleverly prepares the audience to expect a discussion and realize up front that they probably won’t be asking, “Where can I get the action figures?”

In a small room there’s one door, a table, three chairs, and three massive egos. Thomas Jefferson, Charles Dickens, and Leo Tolstoy, all admirable and deeply flawed, find themselves together in Limbo. They vie to come out on top as they air their differences in theology. Initially there’s more trumpeting of personalities and egos than engagement in the sly intricacies of dialogue.

The characters come to believe that they’re locked in the room because having written their own versions of the gospel, they now have to create one together from their common sourcebook, the King James Bible. Yet they skip across the surface of bible-bound religious thought in brief characterizations of their gospels (Jefferson’s with miracles out; Dickens with miracles in; Tolstoy with miracles out because they’re inessential).

Besides being witty, and arrogant enough to write gospels, there’s that other thing these men turn out to have in common. Suffering from hubris and denial, it takes a long time for them to forgo their sanitized views of themselves and approach the reality of how they conducted their lives. Actually it takes a bit too long. Meanwhile, we’re there with them, locked in, hanging on their words, hoping they’ll start leaking truth about the gap between public religious convictions and hypocritical private behavior. The gospels take a back seat, as only the truth can possibly free them.

James Ijames’s directorial mission, according to his program notes, has been informed by the moral appeal of an approach to problem solving uttered by Tolstoy late in the play. Under all the arguments, folderol and laughs Ijames shapes and gently propels the action, letting it roll out. He also inserts a bit of welcome physical theater into a verbose and almost prop free show. For Millie Hiibel it’s a tour de force with just three costumes: Dickens dressed as a dandy, but not too outlandish; Jefferson clad in a rather lavish and fashionably cut colonial frock coat; and Tolstoy attired in peasant couture.

In a situation where characters have long stretches of waiting as others take their turn, these actors keep their game faces on. It would be hard to come up with better casting. They ride with the give and take, each with a distinct and unmistakable voice. Gregory Isaac, whose work we’ve admired at Quintessence Theatre, is vital and compelling as a rational, cynical Jefferson— who could have been quite tedious. Brian McCann doesn’t shy away from becoming shameless showman Dickens. Flamboyant and ridiculous, he’s a traditionalist with religious certitude. And Andrew Criss as Tolstoy is steady and grounded. Tolstoy keeps his own counsel much of the time until he emerges humble, but willing to brag. Ultimately he’s the one to espouse a useful and true philosophy.

This work by Scott Carter rounds out the Lantern’s ’16-’17 season. It seems that in the afterlife calisthenics are cerebral. But the Lantern team digs deep, and with skill and imagination transforms an essentially all-talk playscript into an engaging, living piece of theater. [Lantern Theater Company, 923 Ludlow Street] June 1–July 2, 2017; lanterntheater.org