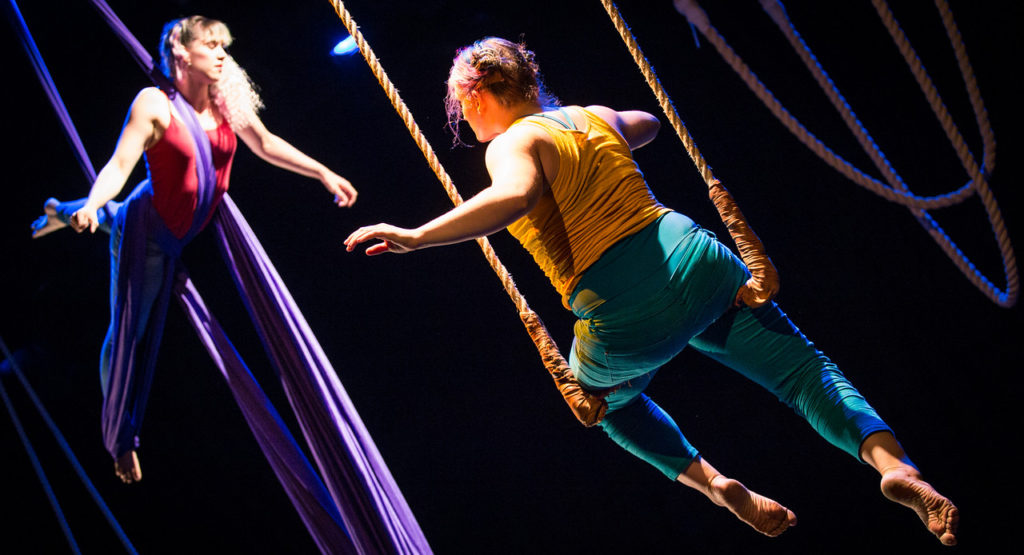 Philadelphia’s favorite circus art troupe Tangle Movement Arts was back in Old City’s Neighborhood House on April 7 and 8. Ever-changing and always in search for new ways to broaden possibilities as artists, the all-woman company presented a new show, POINTS OF LIGHTS, enhanced with live acapella music sung by a singer acrobating on an aerial hoop, a live piano performance by a player standing on her hands playing a rolling electric keyboard, and three guest artists (Molly Barg, Megan Gendell, Noa Schnitzer).

There was little distance between the performers and the audiences that surrounded them in the intimate Neighborhood House. Nine performers presented twelve acrobatic pieces, using aerial silks, ropes, an aerial hoop, and a trapeze. The spotlights on the floor illuminated the performers and projected their shadows on the wall.

Each woman has a profession and past, each has ambitions and dreams for her future; each is at unique stage of her own life. They gather their own lives with their love into their aerial circus and share precious parts of their life with the audience.

Guest artist Noa Schnitzer performed “Branch Hands”, creating a myth-like story about awareness and release. The concept of branch hands (which was depicted by gloves with real tree branches) as something that prevents her from achieving more was expressed in her performance on a trapeze, first without using her hands, then later gaining her both hands to hold tight and climb high.

Lauren Rile Smith, co-founder of the troupe, swayed on a trapeze with a little life in her. It may have made some viewers nervous every time she moved to change her posture in the air. However for her, who has been training herself for aerial acrobat, it would have been a most natural thing to do and the best way to share her happiness for the soon-to-be-born. With gentle narration and the sound of the strong heartbeat, it was the most feminine and truly beautiful piece of the program.

Lee Thompson showed three acrobat pieces, “Breathing the Earth”, “Bitter Chains”, and “Believe Me”. In the latter, she blindfolded herself and thrilled the viewers with her daring but confident acrobatics. Pascale Smith stunned the audiences with her deep rich singing voice in her performance of “The Spinning Body” on a aerial hoop. The last piece of the program, “Maybe I’m Wrong” by Megan Gendell, was inspiring and motivating.

Tangle’s performances always carry a direct message from women just like ourselves, with agendas, small or big. Watching their performers keep innovating with new and different ways of expressing themselves tells us that we do not need to afraid to try something different.