I’m writing this on February 4th, on what would be Rosa Parks 99th birthday. Parks herself is represented onstage in Philadelphia tonight, at the end of the musical The Scottsboro Boys at thePhiladelphia Theatre Company‘s Suzanne Roberts Theatre.

This particular representation of African American history is a little heavy handed, concluding a consideration of a serious episode in black history from the decidedly non-serious forum of a minstrel-ly Broadway musical. But The Scottsboro Boys is just one of three major productions well suited to a February (African American History Month) production. 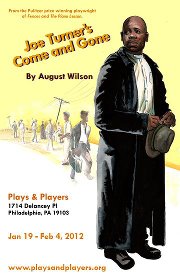 At Plays and Players, a talented cast takes on Joe Turner’s Come and Gone by master playwright August Wilson.  This year marks the theater’s 100th birthday and fittingly, the play takes place a century ago across the state in Pittsburgh. Set in a boarding house, it considers the interaction between established Northern blacks and post-Reconstruction Southern blacks coming North to find a better life. A nuanced, textured look at a crucial era in African American history, the play is a good reminder why Wilson is considered one of America’s greatest playwrights — of any race. Runs through February 11th. Details here.

Arden Theatre Company is currently presenting Bruce Norris’s Clybourne Park, winner of the 2011 Pulitzer Prize. Boldly borrowing characters and settings from Lorraine Hansbury’s classic A Raisin in the Sun, the “outrageously funny” (Telegraph [London]) comedy looks at the same Chicago neighborhood in 1959 and 2009. In 1959, the first black families were moving into the area. In 2009, the neighborhood is almost all-black, but is now being “gentrified” by an urban white couple. Runs through March 25th. Details here.

The Scottsboro Boys is inspired by the true story of nine African Americans accused of rape in Alabama in 1931. Their subsequent trials and the public outcry at their death sentences helped establish legal precedents (right to competent representation, end of all-white juries) and was an early shot of the mid-twentieth century civil rights movement. If you want to see this tale told in entertaining broad strokes with sometimes-incongruous singing and dancing, this is the show for you. The PTC production features many of the original Broadway cast. Runs through February 19. Details here.