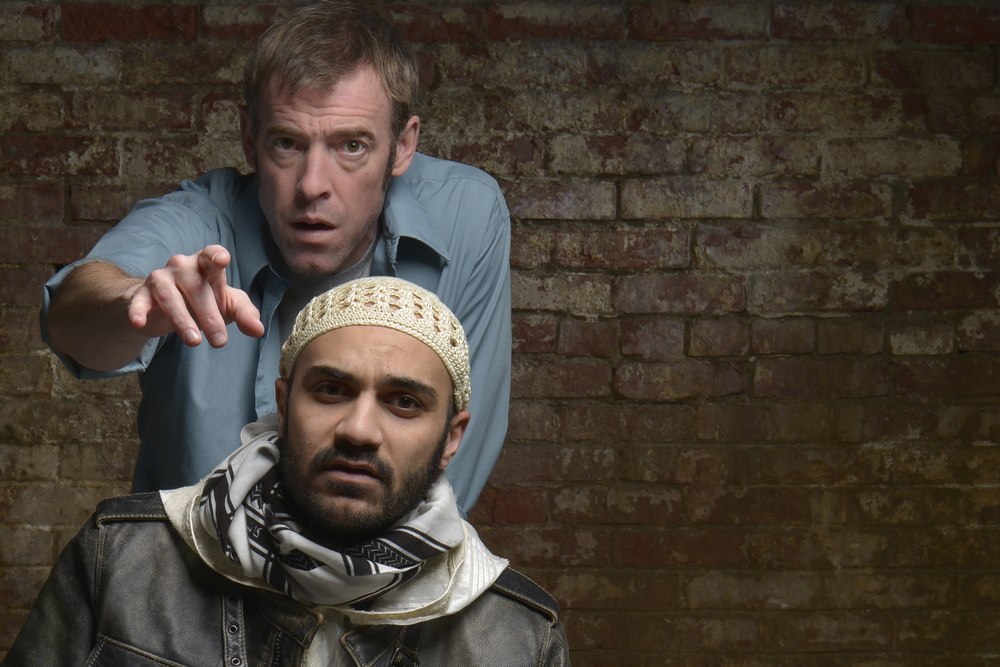 A certain Pakistani faction has bagged the wrong guy. Nick Bright (Ian Merrill Peakes), an accidental hostage is stuck: The U.S. can’t ransom him because the group that has him is designated a terrorist organization. And evidently he’s not important enough to warrant help from Citibank, where he’s a derivatives trader.

His captor, Bashir (Maboud Ebrahimzadeh), a mercurial English-born Pakistani, reports to Imam Saleen (J. Paul Nicholas), who assures Nick: “Bashir is a good man, despite the occasional lapse, your kidnapping, for instance.” The Imam believes that Pakistanis “are prisoners of a corrupt country of our own making,” and he holds the West, particularly America, responsible.

These men don’t use enhanced interrogation techniques. None, including their Imam, are motivated by religion. They are pragmatists. The welfare of their people is their stated concern. Believing that ends justify means, they reject a terrorist label even when their work involves kidnapping, extortion, threats, or murder. More than once they threaten to hand over their captive to Lashkar, an extremist group, for a Daniel Pearl ending, a beheading. When it is proposed that Nick raise $10M in order to ransom himself, he finds it wise to work with them to buy his freedom.

Kept in a small holding cell, Nick is watched by Dar (Anthony Mustafa Adair), a basically sweet guard with whom he develops a prohibited friendship. When Dar tries a foray into capitalism on the side, and lies about it, the consequence of his little deception is delayed to the point that it becomes disengaged from the inciting act.

In order to earn his release, Nick, who is not permitted to touch a computer, takes on Bashir as a finance student who will handle online trades. He teaches him an approach to manipulating global finance by disciplined futures trading, with an intro to short selling. Within their tense interplay of information, fear, humor and friendliness, an uneasy trust develops between them. Nick’s lessons become key for resourceful Bashir, whose learning curve and intentions call to mind the political saying about how ‘they were playing chess while we were playing checkers’.

In the modest Studio X performance space, a holding cell (set design by Colin McIlvaine) is so extremely tight that it must have presented challenges to designers, crew, director, and actors alike.  Michael Kiley’s remarkable sound and music design includes a humming sound that comes and goes, serving a dual purpose. It’s the buzz of military drones and also an ominous accompaniment that underlies moments of dramatic tension. Occasionally very faint booms of drone attacks can be heard. Insistent sounds and clanging music mark the brief moments between scenes.

The four actors, all of whom appear to be extraordinarily bright, approach their roles with grounded intensity and unfussy concentration. They manage their evolving associations under the guidance of Matt Pfeiffer, who emerged, perhaps as far back as Red Light Winter (2006), as a director with a singular gift for keeping actors in the moment and for delineating the intricate interplay of their characters’ relationships.

This Ayad Akhtar play has seen substantial permutations since it was a 2012 ATCA Steinberg Playwriting Award finalist with a production at theRepertory Theatre of St. Louis. Since then its original straight-forward, essentially two-hander plot has been expanded. It’s now less sentimental, less brutal, and devilishly complicated by an internal rift among the captors.

To call THE INVISIBLE HAND dramatic would be an understatement. Taut and engrossing, it’s about the money. Nick’s particular fate is not of real concern. But to my mind, despite a boffo closing lighting effect (designer Masha Tsimring), a too quick and fashionably slightly equivocal ending doesn’t provide the satisfying finish this gripping play deserves.

For better or worse Nick Bright has helped desperate men achieve their aspirations in a playing out of Adam Smith’s premise on how basic economic principles determine political realities:  Every individual… intends only his own gain, and he is in this, as in many other cases, led by an invisible hand to promote an end which was no part of his intention.Akhtar‘s play brilliantly lays out questions about responsibility, moral ambiguity, and the consequences that come with the territory. [Studio X, 1340 S. 13th Street] May 12-June 5, 2016; theatreexile.org.

4 Replies to “THE INVISIBLE HAND (Theatre Exile): A gripping, thinking person’s play about the wages of self-interest”