Skip to content
In 2015, Matt Purinton and Kermit Cole approached Pig Iron Theatre Company co-artistic director Quinn Bauriedel about creating a play based on the extraordinary experiences of Matt’s life (he was born with the rare genetic disorder of TAR Syndrome). Quinn introduced Matt and Kermit to Pig Iron School for Advanced Performance Training 2015 alumna Michaela Moore who joined the project as director. Together, Matt, Kermit, and Michaela brought on added production support from Robin Stamey and Nick Jonczak via Seven Engines, a Philadelphia-based producing group that partners with independent artists and events to engineer small-to-large scale performance projects.

As part of the development of the EXPOSURE project, collaborative performer Ben Grinberg sat down to interview lead artist Matt Purinton about his idea for the project and what he hopes to share with audiences. [Performance Garage, 1515 Brandywine Street] May 20-21, 2016; exposure.ticketleap.com. 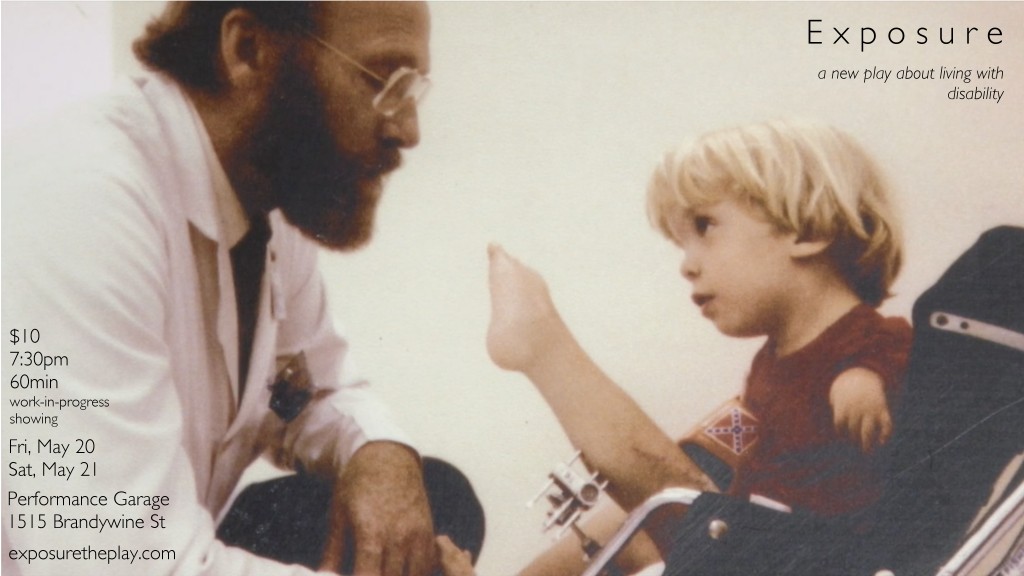 What gave you the idea to want to make this play called Exposure?

Matt Purinton: I always had an idea of it kind of in the back of my head. I’ve been giving lectures and talks about my life since I was about three months old. My parents would take me around. And so it’s always been kind of a part of my life. And I was looking for a way to reach people on another level than what I’ve been able to do with giving talks and telling stories about my life. And my dad is an amazing artist and raised me with an appreciation for art if not his skill as a painter. So art has always been a part of my life and a way that we’ve kind of communicated with each other. It’s how he understands the world—he’s a very visual kind of thinker. And when he got diagnosed with brain cancer I realized I couldn’t wait any longer, or say I’ll do it someday.

Why did you approach Pig Iron Theatre Company to make a theatrical rendering of your life instead of a more traditional theater company?

MP: Well I like the collaborative kind of atmosphere and how Pig Iron devises theater from lots of different influences and so I thought that kind of environment and the way that you create theater would be a good match for what I do. I think of it as guerrilla theater in a way. And so I knew they would be the right group to work with. Kermit through Quinn introduced us to Michaela, and her experience and what she does over the summer with theater in Scranton has a connection with my experiences and my stories and I felt she was really the right person to shepherd and direct and then she made the connection to everybody else and I’m really happy with the team she put together.

What has been the most exciting part for you of working on this project with a group do theater-makers?

MP: Well, I have no experience in theater whatsoever, like literally none. I’ve been to some theater shows, that’s it. I’ve never been a performer. So it’s been really great to work with everybody and just trust their instincts and their knowledge and to watch them work. It’s been really humbling to see their passion for the project and see what they’re able to do with the stories from my life and turn them into beautiful works of art.

What do you think an audience member will get from this production that they might not get from one of your lectures or a talk you might give?

MP: I think there’s a really interesting synergy that happens when you take devised theater and the disciplines that all of the performers come with and connect that with the experience of my life. Having those two things in one performance—the themes of living with a rare disability and also the techniques and visual language and stuff that the other performers bring to the table is going to be something that hasn’t been seen in the theater. I think people are going to enjoy it.

What was the biggest surprise and biggest challenge about working on this show as a performer?

MP: The biggest surprise is that I’ve been kind of able to jump into it a little bit easier than I thought but I think that’s just because the rest of the team are so professional and good at what they do that they can make me look like I know what I’m doing. So that’s been really awesome to be a part of and a surprise of just how well it’s really good. Y’know the challenge for me is to kind of be dramatic and go with it and not be afraid to be corny or just try different things out. I think that was probably a challenge for me when I started but I think because the team has really been supportive that I’ve been able to engage on a journey of my own in the process.

How do you want audiences to feel when they are done watching Exposure?

MP: I want them to feel that we’re all capable of more than we know and when we share a common goal, there’s nothing we can’t achieve. I want people to think about their relationship to disability. If they feel a distance from people with disabilities or if they feel uncomfortable, I want them to confront that and see that disability is just part of the spectrum of humanity and that we all have far more in common than we have that’s different. When we acknowledge those challenges—that we all have inner demons of some sort—then we can cope with them rather than being doomed to repeat our mistakes over and over.