Since first arriving on the scene, Harry Smith has been a permanent fixture in the Philadelphia theater community. He has served as both a nominator and a judge for the reconstituted Barrymore Awards for Excellence in Theatre, and has appeared on stage in productions at Inis Nua, the Walnut Street Theatre, Azuka, the Wilma, People’s Light, and most recently at the Lantern, where he portrays British scientist Francis Crick in its current Philadelphia premiere of Photograph 51. But the Broadway-bound Smith will take his leave from the show on October 4, for a role in Mike Bartlett’s Olivier Award-winning “future history play” KING CHARLES III at New York’s Music Box Theatre. The busy actor was gracious enough to take time between a matinee and evening performance at the Lantern to talk to Phindie about his background, his career, and his upcoming shows.

HARRY SMITH: It’s not specifically related to the theater, but my Granddad was a pub pianist in East London. When I was no more than five or six years old I remember him visiting and playing songs for all of us to share by singing along. I thought that was a great thing to do, to share that kind of creative experience with people, and that it was something I would like to be able to do.

PHINDIE: When did you decide to pursue a career in acting?

HS: I actually made the conscious decision NOT to pursue a career in acting after leaving university with a degree in math. I did a lot of acting while I was in school, and many of my friends went into the theater when they left, but I moved to Oxford and took a job there. While I was working, I realized I wouldn’t be happy without acting, and I decided then to make it a central part of my life, not just a hobby. So it really was the absence of acting that persuaded me to pursue it as a career.

PHINDIE: What brought you to Philadelphia?

HS: My wife, who went to drama school in England, is from Bucks County. We met when we were both students at the Bristol Old Vic Theatre School. She got her degree in acting, but then decided to go into psychology, so attended Temple University for her Master’s, and went to Fordham University in New York for her Ph.D. We had planned to live in NY, but fell in love with Philadelphia while she was studying here, and decided to stay.

PHINDIE: How did you come to be cast in your first show here?

HS: My first Philadelphia theater experience was as a sock-puppet in the play Sally Sock by Alex Dremann, directed by Mary Tuomanen. But my first full role in Philadelphia was in Inis Nua’s Pumpgirl in 2011. I went to the general auditions held by the old Theatre Alliance of Greater Philadelphia; Kevin Glaccum was there and later he gave me a call and mentioned some people I should talk to. One of them was director Tom Reing, so I went to an Inis Nua happy hour and spoke to him. I think he liked the fact that I did a play with a couple of his British TV comedy idols, and so he cast me in Pumpgirl.

PHINDIE: What are your favorite roles to date, both here and in the UK?

HS: They’re all here. Pumpgirl was certainly a favorite, because it introduced me to some fantastic people in the Philadelphia theater community, and Tom Reing and Inis Nua do such great work. The Mousetrap at the Walnut Street was another, because it was my first role there and a big step forward for me. I also enjoyed doing Rapture, Blister, Burn at the Wilma this past season; it was a terrific experience with an excellent director [Joanna Settle].

PHINDIE: What are the main differences you’ve found between the theater community here and in the UK?

HS: People are much more creative here in their casting, and they’re willing to take risks. I also find that the Philadelphia community is very friendly and supportive; the actors here are genuinely happy for each other’s success. They’ll actually ring each other up if they’re auditioning for a show and think that a role would be right for someone. That doesn’t happen much in London, where people are more protective of their own opportunities; maybe it’s because actors can actually make a living here. In London fringe theater and smaller shows don’t pay, so people tend to be more competitive. I also find that in the US in general, the casting director’s role is more central, whether in theater, television, or film, and he or she is more likely to see a broader range of actors. For my appearance on the TV show The Good Wife, I pre-auditioned with dozens of people; in the UK, they mostly see just four or five actors they know and have worked with previously, so as a result there are many more opportunities here to come up through the ranks. I’ve felt very welcome here, very quickly. 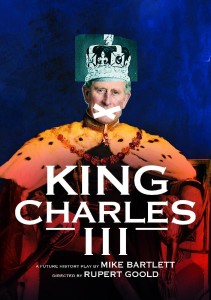 HS: It wasn’t; I auditioned for a role as an understudy in Betrayal with Daniel Craig, but nothing came of it. This was my second, and I’m very excited about it! It was a stringent process: three auditions with the casting director and assistant director, and tapes sent to the UK team since this is a British production. I think they exercised some caution with me because I’m not based in New York and they hadn’t seen me working in the city before, so they couldn’t personally vouch for my ability on stage. I think it’s important to audition consistently, and to enjoy the process of auditioning. Even if you don’t book the role, you will be remembered if you are well prepared and invest in the material. The audition might be the only chance you get to play that part, so treat the panel as your audience and do your job!

PHINDIE: Who are you playing in KING CHARLES III, and how do you view your role in the context of the story?

HS: I’m in the ensemble and am currently listed as playing the small parts of a protestor and an attendant. But I’m also understudying Prince Harry, which is a major role in the play. His arc is one of uncertainty, as he tries to determine what his place is in the royal family and if he really wants that life. The show runs through January, so it will be the longest run I’ve ever done.

PHINDIE: Is it more challenging to portray a real person than a fictional character?

HS: I think the challenge of playing a real person who people know well is tricky; it’s not as hard for a lesser-known figure. But at the end of the day it’s not about the audience comparing your appearance, demeanor, or accent to the real-life person, but reimagining that character through the lens of the play. You can do research on your role, but you have to remember that it’s still a character in a play. Another challenge in understudying a big role is finding a balance between what you bring to it and how the main actor performs it, how to conform without losing your originality.

PHINDIE: How difficult was it for you to leave the outstanding production, cast, and team of Photograph 51 at Lantern?

HS: The hardest part of taking the offer on Broadway was having to leave the show and company of Photograph 51. I love working at the Lantern. Charles McMahon is so supportive of his actors, directors, designers, and staff– his recent announcement of their fair pay initiative is just one more example of this. He and everyone at the theater were incredibly understanding and supportive, allowing me out of my contract so that I could accept this opportunity. Lantern shows always attract a large, intelligent, and devoted audience, and the company chooses such challenging and thought-provoking plays. Plus the Lantern offers student matinees that are well received and exciting; we just had our first today for Photograph 51–a group of tenth-graders who were extremely responsive. You really get a feel for how well the production is going when you’ve got an audience of very animated high-school kids! I will definitely miss being in the show, but am grateful to be able to have the experience on Broadway.

PHINDIE: What are you most looking forward to in NY?

HS: My experience in NY up to this point has revolved around the midtown corridor from the Port Authority bus terminal to the theater district, so I’m looking forward to having time to live in the city and to explore the different neighborhoods. I’ll also try to take some workshops and classes while I’m there. I’m a little nervous going into the production, because I’ll be working with people whose work I have seen and loved for many years. So it’s very exciting but also nerve-racking! I want to live up to the expectation.

PHINDIE: What are your plans after the run of the Broadway production? Do you have any upcoming shows scheduled in Philadelphia?

HS: KING CHARLES III has a fixed run through January, then I’ll be back in Philly. I’m doing The Explorers Club at the Delaware Theatre Company in the spring, about a traditional men’s club in 19th-century London that is faced with the decision of whether or not to admit a woman. It’s a terrific script and cast, so I’m very much looking forward to it!