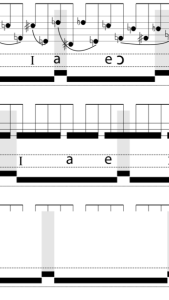 In an synthesized artistic work, a montage consisting of insistent music and sounds coming from various places in the Lava Space building, including the basement, video, dance, live dramatic action, readings and simultaneous recitations and lighting, Quinn Dougherty affects attention to “the social brain of freedom”.

Drawing from the texts of Herman Wallace, Russell Maroon Shoatz, Mumia Abu Jamal, all of whom have spent considerable time in solitary confinement, as well as xenofeminist thoughts from Labroia Cuboniks, Sothis puts forth an experimental spectacle that would summon serious consideration of conscious freedom. The full house was invited to move about during the performance, even to check out the musicians downstairs, to gain various perspectives on the piece. After experiencing SECOND SKULL, there were some audience members who had questions which Dougherty enthusiastically offered to answer or discuss.  He even offered his email address for follow up. This man has a mission, and is armed with art.