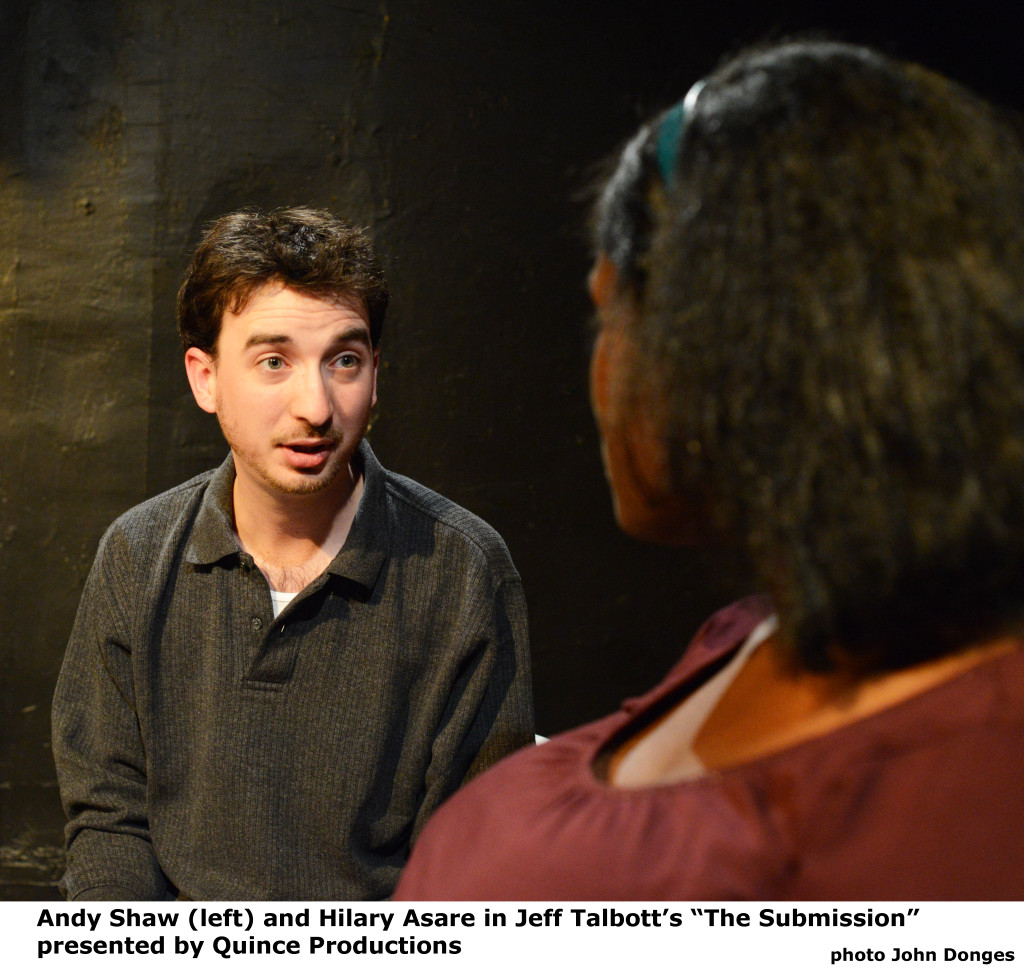 Jeff Talbot said in an interview that his play, THE SUBMISSION, is intended to “start a conversation in the audience.” Congratulations, Jeff you have succeeded. THE SUBMISSION revels in its unique brand of pot stirring, inflammatory, back and forth that had audience members not only laughing, but grumbling and gasping. No surprise, seeing as how the characters talk openly and passionately about things most people seem reluctant to even think of—namely outright racism and homophobia.

Rich Rubin, artistic director of Quince and the director of THE SUBMISSION, addressed the audience before the play began and assured us we were in for “a treat”—he did not disappoint. Within minutes we were laughing and shaking our heads in disbelief. To be fair, they were not the kind of laughs you feel good about. They are the kind of laughs that make you question whether or not you should be laughing. They are the kind of laughs you feel a little bad about having. I admit: I found myself, on more than one occasion, stifling a guffaw in favor of good manners. After all, I thought, one should never laugh in a public place at an actor uttering the phrase “donkey punch.”

THE SUBMISSION tells the story of Danny, a gay, down on his luck playwright who pens a story of inner city strife. However, fearing that no one will take him and his upper middle class whiteness seriously, he, in a vain attempt to give his play an air of legitimacy, adopts an alter-ego: He turns the author into a Black woman. In Danny’s mind this is his only chance of getting produced and winning the praise he so desperately seeks. Much to his delight, the ruse works, and the play is picked up by the Humana Festival (a premiere festival showcasing up and coming theatre talents)—every young playwrights dream come true.

When I first read the synopsis of this play I was a bit worried. I thought of movies like Soul Man and White Girls—the kind of trite Hollywood garbage that masquerade as satire and only serve to strengthen unfounded biases. I was so pleased that this production superseded that type of farcical, lazy writing, and instead delivers a galvanizing punch to the head, activating the brain, and reaching for something well beyond a stereotype. 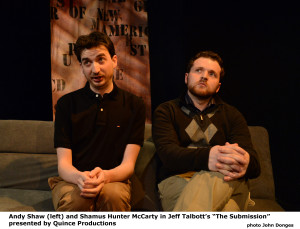 Danny enlists the help of Emilie (Hilary Asare), an out of work Black actress, to pose as the author of his play, a role she reluctantly accepts so that his “great” play may find an audience.  For a moment, everyone involved in his submission is all smiles. Slowly, though, the smiles deteriorate and the play devolves into a wild shouting match, wherein Danny, the playwright, and Emilie, the surrogate playwright, find themselves at odds with one another, both firmly asserting themselves as the victim of the other’s prejudices.

Danny’s best friend, Trevor (Doug Cashell) does his best to play referee while Pete (Shamus Hunter McCarty), Danny’s boyfriend , does his best to keep his sanity as Danny falls deeper and deeper into the nightmare he has created—writing a powerful and important work of art that he cannot take credit for. I found it sad watching their friendships unravel, cracking under the pressure of producing a hit play. Deep in some dark corner of my heart I really wanted the con to go off without a hitch with everyone harmlessly learning some stuff about themselves. I wanted them all to meet up at the café and hug and make up—you know, more of a White Girls-type ending.

The actors flourish in the minimalist and functional production, made up of nothing more than a few stools, a futon and some coffee cups—an approach which allows the script, direction, and acting, to take center stage and drive the plot effortlessly forward toward its cataclysmic finale. This coupled with an irreverent, Kevin Smith-esque sense of humor and the decadent insults that Danny, Emilie, Trevor, and Pete all sling at one another makes for a thoroughly enjoyable theater experience.

THE SUBMISSION, however entertaining, is sadly all too true. Growing up in a racially diverse neighborhood, I’ll be the first to admit that such prejudice exists. Living alongside people that don’t look like me or share the same background is rarely the blissful, trouble-free existence that it is sometimes made out to be on television. But that’s what made this play so real and enjoyable.

These issues—racism, homophobia, and general ignorance—are talked about in their true incendiary nature. THE SUBMISSION unashamedly takes such matters dead in its sights and blows them wide open. It doesn’t necessarily put them back together, but it serves as a good starting point on the long road to healing the dangerous assumptions we are capable of carrying inside of us. [Walnut Street Theatre Studio 5, 825 Walnut Street] April 9-25, 2015; quinceproductions.com.