A combination of sketch, stand-up and improv comedy, THE WINGMEN PRESENT: THE NEIGHBORHOOD sets out to deliver a lively and fun night for its neighborhood audience. Presented by six aspiring comedy performers (Gina Genari, Sarah Wyss-LeClair, Beth Eisenberg, Melinda Messina, Neil Engleman,Chris Rearick, Kevin Ruth), the first portion of the 60-minute show concentrates on rehearsed and scripted short sketches, followed by a selection of improv games the audience can participate in. 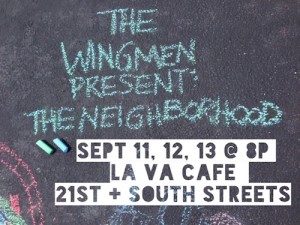 Some of the sketches had a clever premise, but either that premise was never fully taken advantage of or—in most cases—it was over-used to the point of tiresome. Most of the sketches, though, were not particularly funny to begin with. Things perked up with the second part of the show as the improv comedy section produced more laughs and, once or twice, roaring laughter. Regardless, as a whole the show had too many uncomfortable moments and not enough laughs. Perhaps as their run moves forward, the performers will feel more comfortable with each other and be able to produce more truly clever insights. [La. Va Cafe, 2100 South Street] September 11-13, 2014; fringearts.com/the-wingmen-present-the-neighborhood.

2 Replies to “THE WINGMEN PRESENT: THE NEIGHBORHOOD (The Wingmen): Fringe Review 33”