Edited from a review on NealsPaper.com. Read the full article here. 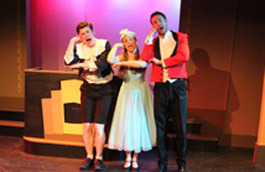 Borrowing the time-honored melodramatic story of the landlord who comes to collect “the rent, the rent” from a forlorn ingénue who doesn’t have “the rent, the rent” Rockwell and Bogart set it to music in the recognizable rhythms of the gentlemen listed above. For Rodgers and Hammerstein, they compose a rendition called “Corn” that includes all of Hammerstein’s allusions to nature and cover titles or key lines from the complete canon of R&H shows. To spoof Lloyd Webber, they reprise the same melody ad infinitum, and cast the phantom of the opera as the landlord while Junita — get it? — is the damsel being harassed. Brassy belt tunes blaring peppy lyrics littered by women’s names are used to skewer Herman. Dragged chairs, exposed skin, German accents, and Fosse dance moves await you at Kander and Ebb’s “Speakeasy.” Minimal melodies and inexhaustible rhyme denote the work of Sondheim. Even the unbilled Marvin Hamlisch gets his turn going through Rockwell and Bogart’s spoof mill.

The five one-act musicals are all fun because Rockwell and Bogart know their sources and hone in on the precise traits that give each composer or team their indelibly individual identity and equally eloquent eccentricity. THE MUSICAL OF MUSICALS is a simultaneous homage and a takeoff , and Souderton’s Montgomery Theatre makes the most of the jokes and the affection Rockwell and Bogart built into lyrics and tunes that have just the right measure of familiarity and contempt.

Stephen Casey directs an energetic and vocally gifted cast that has thorough knowledge of the models it’s lampooning and adds visual gags, physical comedy, and facial expressions ranging from forced musical comedy smiles to ironic eyes in a fine frenzy rolling…and rolling…and….   Casey’s actors are called on to sing a wide variety of musical styles while indulging in broad or subtle comedy depending on the composer being roasted.

The voices, individually and as a group, are marvelous in this show, and Casey’s cast display a great range in versatility as they play multiple characters per script while keeping the tone of each skit. The performers are accompanied on a single upright piano played by a woman who seems to be as amused by the music as she is adept at playing it.

“The Musical of Musicals” provides a good time for theater cognoscenti and the dabbler who can tell an enchanted evening when they see one. [Montgomery Theatre, 124 Main Street, Souderton, PA] April 9-May 4 2014; montgomerytheater.org.